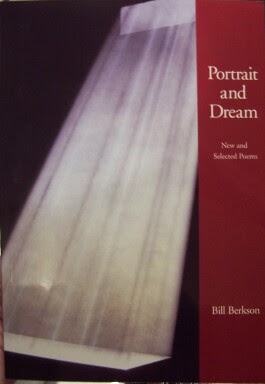 Bill Berkson's Portrait and Dream: New and Selected Poems (Coffee House Press) has just been released. The book is an occasion, as any book by Bill would be, for me, since I've been an admirer of his work for over 40 years. In 1976 I published Bill's then collected poems, Blue Is The Hero (L Publications), which would only account now for about a third of the contents of this new collection.

In retrospect, Bill's work has developed in ways I couldn't have imagined in 1975. Rather than moving away from painting and abstraction, which I then believed he might do, he gravitated towards the plastic arts, and incorporated thematic elements and techniques directly from art criticism, as well as the methodology of painting, sculpture, photography, landscape design, and so forth. This was no surprise, really, since he taught art at the San Francisco Art Institute for 24 years, until 2008; indeed, having grown up inside the New York art world during the 1950's and '60's (his Mother Eleanor Lambert (Berkson) was an important figure in the New York fashion world until her death, at 100!, in 2008), he has never strayed very far from the preoccupations of art and artists. It's probably inevitable, then, that his work should be considered within the context of the history of aesthetic movements and trends, since the inception of Modernism. How one mediates between the life lived, and the expression of intention through art, seems to have been perhaps his major theme since he began writing seriously in the 1950's.

If the intersection art and life has always been the ostensible subject of Bill's work, the method and strategies by which this is addressed has undergone some changes over his career. From the start, the relation between the authorial voice and its presumed "subject" was never traditional: From the first poems in Saturday Night [1961], there is a level of abstraction which resists specificity and referentiality, in favor of an imaginary dialectic: Fragmentation, blurring, altered states, and an amused skepticism masquerading as conviction. Nevertheless, each poem had some kind of reference point (an election day, a day in the garden, an Italian movie, swinging saloon doors, the doorman in Mother's building) to which all the language tangentially referred, if only obliquely.

The turning-point in this collection is the long prose-poem piece, entitled, significantly enough, "Start Over 1979-1980". Most all the poems published after this, completely eschew traditional occasional subject-matter, in favor of an autonomous, restless linguistic anxiety, in which every word, every phrase, every stanza is sacrificed to an expedient priority. This regime makes it difficult to get settled into a poem: What this feels like, to me, is not unlike Ashbery's method, in which a nimbus of feeling coalesces around a sequence of images and phrases meant to reassure us with familiar gestures and objects, at once bland and weird. But Berkson takes it a step further: Not only are we routinely on unfamiliar ground, we don't even have the convenience of recognizable signifiers. Taking a few couplets, at random, from the poem "Memoir Bay"--

Lap, the car talk, the Boston rat catcher, vigilance
Bones eclectic in the manor, blinkered in some slipper's cap,

On the brain gold feed plaques
Blend, the unissued stamp.

--etc. Though the alignment, capitalization of line beginnings, and conversational syntax--the whole look and feel of the frame--is unchallenged, the level of abstraction it entertains is far beyond any descriptive eventuality: The subject of the poem is its own changes, its own peculiar, eccentric, weird, witty play. Sensations come at us, do a turn, then disappear down the rabbit-hole. It's a Dada light-show, punctuated by litter and glitter and four-dimensional dance-bands. Imagine Venice plaza with in-line skaters selling pink cotton-candy to Charles Laughton. Chihuly drowning in party-favors. Cocktails in the bank vault. Breakfast at Tiffany's, Gidget's pregnant.

Maybe an "outsourced consciousness"--rented tux that doesn't fit. Ultimately, the self trades alienation for a cell phone. Tow truck stranded on the bridge, we're due to flounder at three. So the art critic points with a muffled poker--what does he think? Search me. In an earlier poem from the 1970's, "In From the Edge" the last four lines read "Strip the night away:/there is a room somewhere//and one lies down near it--/lives, in fact, just outside." The implication is that the space the self occupies is always separate--though closely adjacent to--the  art-"room" of action, creation, possibility. The poems Berkson has written since the early Eighties suggest that he's gone into that room, or at least, now has the key. But it's in a secret location.

Posted by Curtis Faville at 8:57 PM

OH. I see that you point that out...
your excerpt (Memoir Bay) terrific the stops and starts like

dancing on a perfect wooden table


pure pure "70's" regardless of all conventions...and bold

what was that book A Secret Location in Manhattan..


I am gonna buy this Berkson book! at it s full price

will be my first "dipping" into his poetry...