The Demise of Daily Newspapers 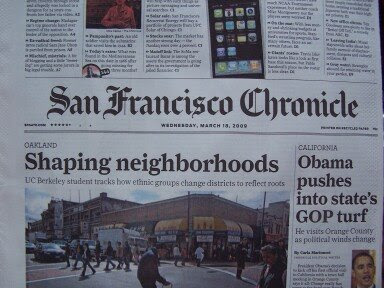 The demise of major urban daily newspapers, which has been foretold for over half a century--roughly since the arrival of television in the early 1950's--finally seems to be upon us. The rise of popular dailies more or less paralleled the industrial expansion beginning in the mid-19th Century (first in Europe), reached a crescendo in the 1920's and 1930's, then began its long period of decline and consolidation beginning in the 1940's. Television directly challenged print media from the Fifties onward, but major dailies held their own, increasingly relying upon ad revenue to make up the shortfall from subscription and street sales. As recently as five years ago, major newspapers were making big profits--reported to be in the neighborhood of 12-20% per annum. Under the Bush Administration, attempts were made to facilitate the consolidation of cross-media conglomerates, generating fears of political homogenization, not surprising given the wholesale elimination or downsizing of news divisions at all levels during the Eighties and Nineties.

It was clear, given the enormous pull of the World Wide Web--its speed and efficiency--that eventually some form of online media news dissemination would challenge other media (newspapers, television, radio), but no one could have predicted that it would happen so quickly. Just as Amazon and Alibris brought about the downfall of both the retail and used book "brick & mortar" businesses, online news services, many of which were maintained by the newspaper organizations themselves (!), have drawn ad attention away from print media, erasing their profit margins almost overnight.

Is the personal computer a viable replacement for the material text of newspapers, magazines and other more portable print formats? To some degree it is, but for the majority of customers for traditional print media, the disappearance of regular dailies is neither convenient nor desirable.
I grew up in the San Francisco Bay Area. For my whole life--with the exception of brief periods in the Midwest, and a year abroad in 1985--the San Francisco Chronicle (the "Voice of the West") has been where I got my news. As smaller town newspapers gradually died away, the Chronicle maintained a stable subscription base, cutting across class, ethnic and economic lines to serve the whole community. Where does the impending cessation of newspapers--as primary transmitters of information and informed (political) opinion--leave the great mass of citizens who depend upon it, and for whom the personal computer is not, and may never be, a viable or practical alternative?
Even more troubling, is the fact that the disappearance of newspapers is occurring at the very same time that television and radio news bureaus, and national and international news services, are cutting budgets and staff.
It's by now a relatively old idea--that a democracy depends to a large degree on the existence of a free press to function properly--but it's as pertinent and crucial today as it has been at any point in our last two hundred plus years as a nation. Without investigative journalists digging for news and stories, without timely reporting of unfolding events of concern at all levels of government and commerce, how can the citizenry act responsibly and with the requisite knowledge, to protect their own interests.
I'm not sure the internet is properly structured, or prepared to step in and occupy the function of newspapers. As for myself, I've never "read the news" online, since I was never able to navigate as efficiently among linked pages or sections, as I could a physical newspaper. I've subscribed continuously to the SF Chronicle for nearly 35 years, and now read it more religiously than ever, frequently writing letters to the editor. If it goes under, there'll be a big hole in my awareness of the world at large.
The survival instinct of the news media seems not to be very great at this moment in time. That may, ironically enough, be one of the symptoms of the disease itself. The audience still seems to be there, it's the business model that has changed. Computer technology continues to destroy parts of our intellectual infrastructure, without supplying any real replacements. We seem in the midst of a watershed moment--a gap in time--in which old paradigms are giving way, but not to new, more efficient and universally useful ones. This feels more like a contraction. Less news. Less convenience. Less access.
Posted by Curtis Faville at 8:12 AM

This area of upstate New York is unusual in that we have a strong local paper (the Oneonta Star), plus a smattering of micro-newspapers supported by a billionaire advertising exec who sprang from these parts.

One of the neatest features of one of the micro-papers (The Walton Reporter) is that it regularly publishes articles from a hundred years ago. It's surprising how savage the people of those times were in their reportage.

One article actually said that a negro had been sighted several days before, and everyone should keep a sharp eye on their property!

It's just amazing to read the way that people thought it was appropriate to write journalism back in that day.

In Seattle, the Post-Intelligencer went under this week. It had been around for 146 years.

The Seattle Times is still going. There are also small business newspapers, and a smattering of special interest papers, such as the Jewish Chronicle of Seattle (there must be less than 10,000 Jews in Seattle, but perhaps there are more).

There are also two somewhat countercultural newspapers. One is called The Weekly, and was a big upstart in about 1970, with lots of hippy contributors. Those guys got old, and still write, and now seem very much like something out of Starbucks.

Then there is the Stranger, which started in the late 80s, and had a kind of punk-feminist perspective, with lots of exciting contributors in its early period. I haven't read it for fifteen years. It lives off sex ads, now, or so it seems the last time I picked it up. I was in Seattle to read from my novel at the Finnish Foundation there, and picked up all the local papers. And in fact all of them seemed to persist on the strength of their personals ads. But the ones in the Stranger were the most gratuitously appalling, appealing to the most prurient and sadistic impulses, often for pay!

You must have similar rags in San Francisco.

About 85% of international news comes from reporters that the White House appoints, so almost everything we hear from foreign sources comes filtered through government perspectives. It's been that way since at least the 80s.

To actually learn anything you'd have to learn another language, I guess, and poke around.

The internet has been good in opening us up to particular perspectives from around the world. I imagine that North Korea and Burma and other countries publish an English version of events in their countries on line. That might be a hoot, if you have a time for such nonsense.

There are also some newspapers which are actually growing. The Wall Street Journal is now number two in the nation, and I think when the New York Times goes under, it shall be number one.

One thing I haven't noticed in the fairly widespread discussion of the validity of the daily newspaper is its incredible waste and inefficiency. I know there's a handful of newspaper fanatics who read them cover to cover, but surely that can't be common. It takes me very little time to scan a newspaper, reject the stories I know I won't be interested in (not only stories: whole sections), and then scan the few stories left. The amount of newsprint, ink, technology, machinery, and transportation involved is scary. Then there's the odd quality of newspaper readership/reception: it's on the cusp of private and public action; most newspapers wind up I think in public spaces -- laundries, buses and trains, cafes, and the like. It's an incredibly wasteful process. It's the fruit of an age when this kind of waste and inefficiency didn't matter as much, because costs were lower I suppose -- though there's much to contemplate in that aspect. Well: in all these aspects.

Given the progressive decline of newspaper print media, I'd bet the actual consumption of raw materials has been on a steady decline since, say, 1970. Most major U.S. cities once had 3 or 4 regular daily papers--that hasn't been true for a long time. Recycling has reduced much of the waste associated with the older "consumption" model. When I was a kid, we used to burn our trash in the backyard. Nowadays, we take everything that isn't degradable to the El Cerrito Recycling Center. One of the casualties of the recession is that the value of recylcables has gone down steeply. As a book dealer, newspapers are useful to me for packing material.

I don't mind the waste bulk for weekday editions, but the Sunday ad sections are really a waste, though I presume that that represented some important revenue for the newspaper company.

The disappearance of newspapers will mean that there is less and less money to fund the gathering of news, and investigations into matters that the general public absolutely needs to know about. If that function goes away, how will we know about corruption? Bloggers certainly aren't going to tell us about it.

The internet is amazing, but one of the things it doesn't do at all well is give you reliable reporting. There's mountains of opinion, but not much real original, verifiable reportage.

Those of us who spend a lot of time on the Web tend to think we're legion; but there are a lot of people, especially in rural areas and less prosperous places, who aren't connected. Why should they be stranded?

I use my newspapers ,mostly those free ones they throw on my tacky-lawn..

to get the fire in the wood-stove going

as for recycle-ling around here "they" are so overwhelmed with "recyclable" garbage that it is diverted to the dump... cheaper than making
new plastic soda bottles (made in China)
or other plastic crap..


there is most likely an issue out now...

but, no reporter is covering the story (fable)