The Photograph & Its Ghost 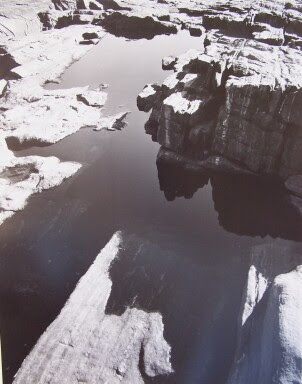 There is a famous photograph by the French photographer Atget, of the doorway to a Paris shop. Since the film he was using was very slow, his exposures tended to be very long, usually at least 5 seconds, and occasionally as long as several minutes. I believe he used the old lens-cap method of exposure, instead of any mechanical shutter. In this photograph, you can see the faint blurred shadow of a man in a hat walking out of the dark doorway, towards the viewer, turning left onto the street. It's just a strange blurring trail, impossible to make out any facial features or detail.

All photographs imply the existence of at least one viewer--even automated ones done by automatic mechanical devices. This viewer is almost never inside the frame of the photograph, though of course it is possible for a photographer to make a self-portrait, either by using a remote shutter cable, or by photographing into a mirror, or by photographing one's own shadow or reflection (Lee Friedlander's self-portrait on the viewing deck at Mt. Rushmore Monument is another example).
Every photograph, therefore, has a "ghost"--a human figure which is not present within the image, but exists outside it, as a guiding agency. The image of the print is a reflection of the vision of this ghost--he is present, and not present. Looking at the event, you realize that, no matter how improbable the position or moment of the photograph's exposure, the photographer had to have been there, in order for it to have been taken. Photographs are spoken of as having been taken, yet there is another theory about photographs:

That photographs "take" the photographer, that subject-matter summons the image-maker; that there are forces (if you will) which coalesce in the occasion of exposure which are to some degree unconscious, even, perhaps supernatural.
Minor White [1908-1976], co-founder of Aperture Magazine (and books), an early advocate of the spiritual (or extra-sensory) possibilities in image-making, described the photographer as one who "recognized an object or series of forms that, when photographed, would yield an image with specific suggestive powers that [could] direct the viewer into a specific and known feeling, state, or place within himself." Paul Caponigro (1932-), a former student of White's, believes that "one needs to be still enough, observant enough, and aware enough to recognize the life of the materials, to be able to 'hear through the eyes'." The work of both these photographers is testimony to their interest in exploring the mystery of landscapes, objects, and structures that can be made to reveal a hidden element, a content that has its counterpart in "oneself" (the photographer). This notion of an unconscious presence (or feeling), which can only be accessed by looking outward, into nature, that nature indeed contains this content, is of course a very mystical notion, one that is difficult to speak about rationally. Caponigro, indeed, has complained about the degree to which his master White seemed to depend to an exaggerated degree on the necessity for a metaphysical sub-text to his images.
What is it that causes us to be fascinated by specific images, and bored by others? The question is different for painting, or sculpture, or landscape architecture. In photography, we're looking (usually) at something which was there before it was "taken," even if only fleetingly. This suggests that the mystical secrets which conceal meaning and feeling, exist everywhere in nature, that we have but to look, to discover them. Indeed, it suggests further that these kinds of epiphanic instances can take place at any time, whether or not one chooses to capture them in photographs. Photography is most of all about choosing; the possibilities are endless. Deciding what, and when, to make an exposure is an enormously complex nexus of decisions, which all coincide to produce a result.
The above image was made on the coast of Maine in 1987, near a lighthouse perched on an outcropping of rock. I was drawn to the shapes of the rock, and the pattern of tide-water, but especially to the variation of tone in the water between the darkness of the pool in the foreground, versus the lightness of the pool near the top of the frame. There was an inevitable quality about the tracery of the water-line, and the variation of the shape of rock in which it lay. Such organic structures--existing without any interference by man, suggest both the rigid ordination of matter (hard crystalline rock) and the pliable behavior of water subject to the forces or gravity. Different states of matter in conjunction.
If the theory about "ghosts" in photographs is correct, I am somewhere "inside" this photograph, as well as standing just outside it, beside the tripod, with the shutter cable in my right hand, holding the dark-slide with my left, blocking the sunlight from the surface of the lens. What was I looking for, climbing over the rocky coast of Maine? The answer lies in the photograph.
Posted by Curtis Faville at 12:21 PM