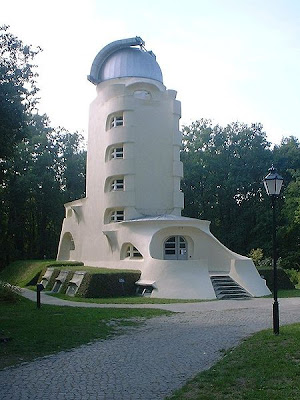 Einstein Tower - Potsdam [1920]
Early Modernist architecture had a visionary side. The Modernist movement in architecture in the early 20th Century was to a large degree inspired by mechanization and futuristic visions--this is the basis for what we now think of as "science fiction" which got its start in the late 19th Century (Wells, etc.)--facilitated by steel girder construction, as well as fantasies of structure. Though the aesthetic basis for much modern design was utility and functional simplicity and practicality, its other side was intuitive, "organic" and even romantically inspired.
Erich Mendelsohn [1887-1953] stands as a key figure in the visionary Modernist camp, perhaps the major exponent of a style of design which united visually stunning conceptions with the the structural components which came to be associated with the International Style. Post-Modernism--think of Philip Johnson, late Wright, Frank Gehry, and dozens of others--looks back to early Modernist examples, such as Mendelsohn, for antecedents which express a similar freedom of imagination, unhindered by narrow applications of spatial efficiency or cost. 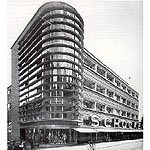 Schocken Department Store, Nuremberg [1935]
Mendelsohn's career as an architect was interrupted by the First World War. While serving in the trenches, he wrote letters to his wife, on which he made tiny sketches of imaginary structures. These sketches are among Modern architecture's key documents. Conceived in a heroic style, they propose sweeping curves, looping cantilevers, dramatic futuristic shaped towers, etc. Though too small to suggest articulation of interior spaces, they share with other dreamers of the new urban landscape (e.g., Hugh Ferris) a view of the potentially exciting possibilities of large buildings, conceived within the context of the new rapidly expanding, high-powered economies of late industrial capitalism. This optimism may seem a bit naive to our jaded sensibilities, since we no longer much believe in the opportunities of the production line, the skyscraper canyon, or the functional super-apartment block. 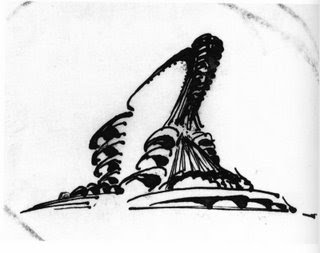 In 1933, with the rise of Hitler's Nazis, Mendelsohn emigrated to England, leaving already a trail of important commissions, and most famously, the Einstein Tower [1920]. Conceived as an astronomical laboratory to "test the theories of Einstein's new Theory of Relativity" its expressionistic exterior is suggestive of Captain Nemo's Nautilus submarine, immortalized in Walt Disney's 20000 Leagues Under the Sea [1954]. Poking its periscope-like tower up above the tree-line, it symbolizes man's curiosity about the universe, and the confident power of science to make useful and amazing discoveries. 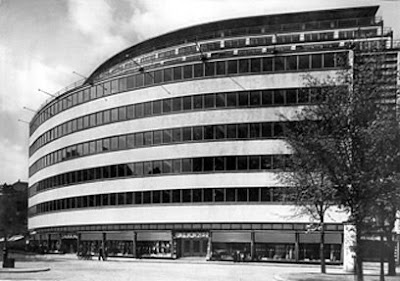 Schocken Department Store, Chemnitz [1928]
As impressive as some of Mendelsohn's larger buildings are as dramatic, curving shapes, we know now that such gaunt, glowering structures can be dehumanizing, making us feel small and insignificant against the backdrop of corporate power and institutional facelessness. In 1941, Mendelsohn emigrated to America, where he practiced until his death in 1953. Along the way, he designed buildings in Palestine/Israel, in addition to those in Britain and the U.S. 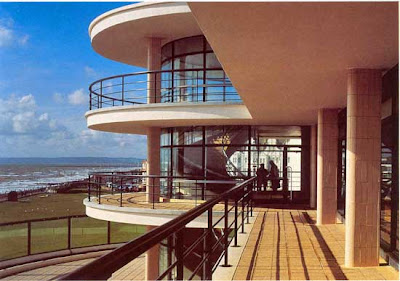 Bexhill De La Warr Pavillion [UK, 1934]
In 1955, Mendelsohn's widow published a beautiful limited edition [1/500 copies] of her late husband's architectural sketches, including some from the "trenches" series. We offer a collector's copy of this portfolio through our Compass Rose Books inventory, priced at $2000.
Park Synagogue, Cleveland, Ohio [1947]
Mendelsohn's career path is an analogue for crucial events in the 20th Century. Starting out as an optimistic visionary before the WWI, he passed through that conflicted era, only to be expelled from his native country as a politico-racial exile in middle-age, then carried his vision to England, Israel, and eventually America. The Jewish diaspora from Germany resulted in a dissemination of genius, an unprecedented scattering of talent and precious knowledge.
Posted by Curtis Faville at 8:25 AM