The British-Canadian naturalist, writer and sportsman Roderick Haig-Brown was born 101 years ago in England. After his father was killed in WWI, he washed out of prep-school, and later emigrated to Canada in the early 1930's, specifically to Vancouver Island, British Columbia. Rural Northwestern Canada in those days was rough country. Haig-Brown worked in the logging and fisheries industry, married a Seattle girl, and settled in Campbell River. An avid fisherman since he was a teenager, he'd already published two books by this time on angling, Silver: The Life of an Atlantic Salmon, and Pool and Rapid (1932). He would go on to write and publish some 25 more books, both fiction and non-fiction, juvenile and adult titles. 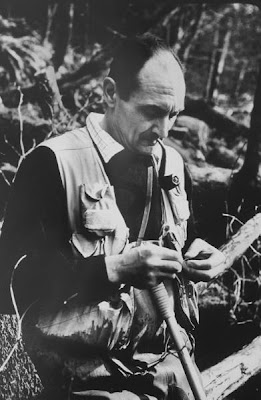 I first discovered Haig-Brown as a budding fly-fisherman in the 1970's. Flyfishermen may come to the hobby in childhood, or discover it later on their own. In my case, it was a little bit of each.
My stepfather, Harry W. Faville, who had grown up in Wisconsin, had fly-fished as a boy. In the 1930's, following the break-up of his first marriage, he wandered around the West in an old jalopy, taking odd jobs and wetting his line in the trout streams of the Rocky Mountains and Pacific Northwest. He would tell stories about great days trout-fishing on the Yellowstone and Madison, and Steelheading on the Klamath and Eel River. Before WWII, vast tracts of the West were largely unspoiled, and unregulated. An enterprising sportsman could find plenty of good water and fish for the taking.
By the time I was coming of age in the 1960's, the Vietnam War and the Student Protests had driven a stake into the heart of my relationship with my parents, and what enterprise might have developed between my stepfather and me, quickly evaporated when I went off to college. All I had were a few scattered memories of a day casting spinners to "half-pounders" on the Klamath and a couple of trips to remote back country Sierra Nevada lakes. But there were those stories....
I never suspected that "fishing" writing could be as compelling as true literature. Who would have thought that a Canadian naturalist could be as good a writer as John Steinbeck? The new generation of nature writers that emerged in the 1960's has really given the green movement a shot in the arm: Edward Hoagland, Edward Abbey, John McPhee, Barry Lopez, and a host of others. Anyway, the first book of Haig-Brown's I picked up was Fisherman's Summer [1959]. There were four books in the series, for the four seasons, and I was hooked with the first one. Prose style is a combination of several things: Clarity of purpose, graceful phrasing, balance between sentence lengths, judicious measure, fairness, passion for subject. Haig-Brown had all these things and more. Flyfishing--wading, stalking, casting, watching, playing--requires discipline; it's not unlike playing baseball, periods of waiting followed by sudden spasms of action and emergency. No one who has tried to do it methodically would deny this. Haig-Brown was the one writer capable of imparting accurately the simple clarity of physical, emotional and mental impressions of flyfishing with complete fidelity--he has a bracing quality, the freshness of action, of the feel and sparkle of wild fish in hand--which can be thrilling. But he was so much more than that.
Haig-Brown was sensitive to nature in ways that all great naturalists have been. His sense of the power, and fragility of plants, animals, weather, streams--their beauty, and mortality--is touching, and sobering. In the latter half of his life he studied and wrote about the natural history and environment of British Columbia, and actively participated in environmental preservation. On the imaginative side, he wrote effective first-person accounts, as well as "animal" fictions about the natural world, neither condescendingly nor stuffily; on the practical side, he strove to bring about protections and sensible attitudes that would help preserve the countryside he loved. He was one of the first to understand that we have to change how people think about nature before you can convince them to conserve and value it. As exciting and seductive as his "sportsman's" essays are, it's his wider concern for preservation which marks him as a crucial figure in the world environmental movement.
The ethics and culture of modern dry-fly fishing was in its infancy then when Haig-Brown first began to write about his experiences. Over-exploitation was the order of the day. Wild fish were still regarded then largely as a food source. We're all familiar with those sightly embarrassing old photos of "lucky anglers" standing beside a clothesline of fish hanging in rows, the "haul" of a single afternoon's "harvest." Those days are over. Haig-Brown was among the first to see how catch & release, the deliberate returning of caught fish back to the water--as a way of perpetuating the species and maintaining runs--would eventually be the standard by which sport-fishing would survive.
As a provincial magistrate [1941-1974], Haig-Brown meted out justice to his fellow citizens. The same sure hand he used on "the bench" he used in all his dealings. In 1974, he sold his house and land along the Campbell River to the BC government, now used as a B&B and Canadian Council's Writer In Residence. A provincial park and a mountain are named after him, in honor of his contributions to preservation of the Fraser River and its tributaries, the salmon runs and spawning grounds.
Reading his works now, 50, 60 or 70 years after they were written, is to be taken back to a time before the West had been overrun, before it had been fished and logged and mined and paved to near-extinction. His ability to evoke the felicities of streams and rivers, and the lively fish that lived in them, along with all the other aspects of unspoiled nature--for those who care about such things--is endlessly romantic. Who would you rather have as a companion on a cold Fall day on the water, than Roderick Haig-Brown?
When I was first married, my wife and I read Measure of the Year [1950] together, in which Haig-Brown sets out the parameters of a consciously frugal and responsible family life, which naturally included the piecemeal acquisition of a fine private second-hand library. What better advice could anyone give? 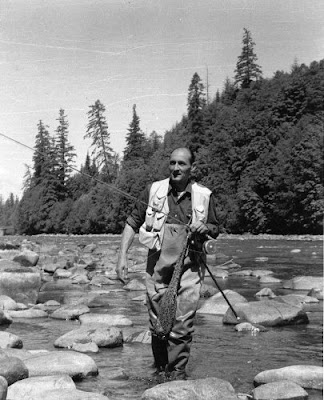 Posted by Curtis Faville at 6:34 AM

my friends fished The Salmon River, The Rogue River,
north of Monroe, Washington

in 1773 we went up to Vancouver and took the ferry I think it was called The Nanao, w some gear and a 19 ' sea kyack

anyway 1972 we camped out on Vancouver Island

back in Seattle a few weeks later Jamie got me a copy of one of his books a story about the life of an Atlantic Salmon (which now grow in swimming pools in India!

I got photos of our drift-wood camp site on VC Island and photo or me and Shellie in the Kyack just before a killer whale chased us cause we had caught a sand shark and it was after the blood and/or us!