Shane - The Enigma at the Heart of a Classic Western 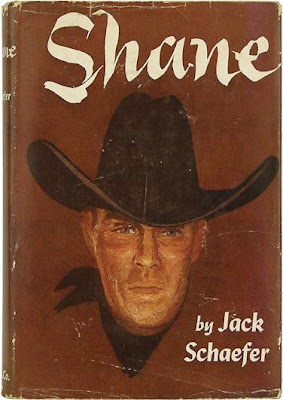 Shane [1953] holds a special place in my memory of movie history and experience. When I was a toddler, my parents went often to Drive-In Movies, or what we called "motor movies." I was an only child then, and I had place of honor, standing up on the car seat between my parents. Much of the early drama of my imaginative life took place in this position.
The motor movies had a certain rhythm: You drove in through a gate, paid your $2-3, and then drove among the rows of audio speakers on metal stands, deciding upon a place to park to see the big screen. The projection hut doubled as the snack bar, and between features, or during the "intermission" break, customers would crunch back on the gravel lot to the snack bar to get popcorn and sodas and candy. Often there was a "drawing" based on the ticket numbers given at the gate, and the lucky winner would get a side of bacon or a gift certificate at the local 5 & dime store. When the movie was approaching its end, early departing guests would turn on their lights and put the audio unit back on the post. Often, they'd forget to do this and would drive away, pulling the speaker cord off its post. The car became a kind of private world--you could say whatever you wanted, and do pretty much what you wanted in the car. A Lot of heavy petting went on, and it was best not to pay too much attention to what was taking place in adjacent cars.

Based on the genre novella by Jack Shaefer, the screenplay was written by A.B. Guthrie, Jr. (a successful novelist--The Big Sky, The Way West). Set in the wild newly settled territory of mid-19th Century Montana, it creates the usual dialectic between the tame, civilized rancher-settlers, and the dictatorial outlaw with his band of gunslingers hired to beat back the advance of newcomers, whose smaller claims and subdivisions threatened to end the era of the open range. Schaefer's book holds a unique position in the annals of Western (or cowboy, or "old West") literature. It was the author's first book, and is one of the most sought-after collectible first edition titles in 20th Century fiction. The book starts this way--

"He rode into our valley in the summer of '89. I was a kid then, barely topping the backboard of father's old chuck-wagon. . . . In that clear Wyoming air I could see him plainly, though he was still several miles away. There seemed nothing remarkable about him, just another stray horseman riding up the road toward the cluster of frame buildings that was our town. Then I saw a pair of cowhands, loping past him, stop and stare after him with a curious intentness."
There was a kind of sentimental cliche in cinema during the 1950's, of a father and a son, or a father and mother and a child, facing the challenges of life "on the frontier"--withstanding adversity and building a life. Shane was one such movie, the story of a quiet gunslinger (played by Alan Ladd) trying to escape his past, who befriends a pioneer family which has settled out west in the 1880's. He becomes a hired hand to Joe Starrett (Van Heflin) and his wife Marian (Jean Arthur). Shane tries to stay out of the land dispute, but keeps being drawn in and is finally compelled to put his six shooter back on when the ranchers hire Jack Wilson (Jack Palance), a noted gunfighter, to intimidate the farmers.
Another aspect of this sub-genre was adult sexual tension as seen from the child's point of view. In the novel, the narrative action is seen through the eyes of a boy (played by Brandon de Wilde), as recollected in adulthood. Though the boy idolizes Shane, Shane's attraction to the boy's mother threatens his immaturity and family security, even as his admiration for the drifter's grace and courage grows.
In attempting to understand my own feelings at the time in relation to my parents, and our own little family, I could only intuitively comprehend how the action on the screen related to me. My Mother's first brief marriage was ending just as I was being conceived. My stepfather--a man 22 years her senior--entered the scene at that point and assumed parentage. A refugee from a failed marriage almost 20 years earlier, he had grown accustomed to the freedom of living single, and would prove, as time wore on, to be not only an unreliable breadwinner, but a skirt-chaser as well. I could sense this waywardness, even at age 6, though nothing overt was taking place in our lives at that moment. Clearly, I shared my stepfather's identification with Shane, just as he shared my identification with the boy's innocent excitement at growing up on the frontier. But my bond with my stepfather (I wasn't told about my real parentage until I was 13) was eventually complicated by his sexual instincts, just as Joey Starrett's (de Wilde) love of Shane is complicated by the attraction of the drifter to his Mother Marian Starrett (Jean Arthur). Joey's Father Joe Starrett (Van Heflin) is a staunch, hardworking, trusting husband and father, but much less romantic a figure than Shane. Joey's identification with Shane--his charming manner, his skill with a pistol, his bravery--aligns him with the profile of a sexually charged potential predator. Joey is charmed by him in the same way his Mother is, in opposition to the responsible, stable family unit, the cooperative, community oriented ethic which Joe Sr. represents. Joe Sr. is a bore who wants to hold things together, to make people get along, but he's impotent against the unscrupulous Rufus Ryker, the open-range laissez-faire cattle-capitalist and his band of hired guns. The opposition of potent-cowboy and impotent "farmer" is a key one.
I could tell my stepfather identified with Shane, rather than Joe Sr. I knew my Mother identified with Marian (Jean Arthur). Marian is conflicted: She too believes in family, and security, and the continuity of settled community, but she's also drawn to the potent drifter. This waywardness in both the parents always troubled me, from my first viewing of the film at age 6, because I perceived the same tendencies in my parents as I saw in the movie, tendencies in them, which would later lead to awkward, and eventually catastrophic developments in our family life. The cliche-ridden cultural paradigms of the 1950's would have assumed that most fathers of that time would fit the Joe Sr. mold. But in my case, I sensed that, despite the overt commitment of my parents to accepted codes of behavior, both of them privately did not subscribe to those values. The modality of ostensible conventionality was one I saw as fragile and vulnerable--beneath the veneer of propriety was an undercurrent of rebelliousness that could tear apart families and make spiritual (if not psychological) orphans of innocent children. That was my fear, and that was, to a large degree, what made my early appreciation of this movie so memorable.
As a child, I would play cops and robbers, cowboys and indians, and so on--in juvenile tribute to the "games" of genre fantasy, the imaginary fictionalized versions of the American West or crime noir, but the real issues revolved around competing tendencies of behavior, and of the implied insecurity or dangers which lurked close at hand. The movie version of Shane was as much an exploration of the tensions of family, of American middle-class mores of the 1950's, as it was an exercise in platitudes of the Western genre stereotypes.
The movie was a standard vehicle for the box-office heart-throb and noir veteran actor Alan Ladd, whose diminutive stature (he was only 5'5"!) routinely had to be carefully camouflaged, lest he appear a midget among men. His popularity isn't difficult to understand--his boyish good looks, mellifluous voice and understated easy-going manner made him a natural matinee idol. Nevertheless, he eventually succumbed to inherited depressive neurosis, dying of an overdose of drugs and alcohol at only age 50! 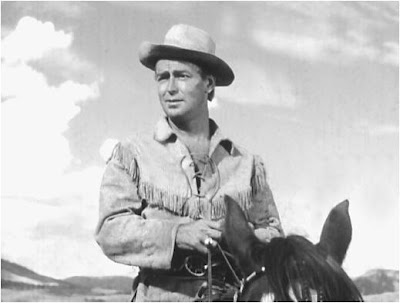 Brandon de Wilde, the child star who nearly stole the show, also had a tragic life. After starring in another signature Western, Hud [1963], and In Harm's Way [1965] as a young ensign in the Pacific Theatre during WWII, he was killed in an auto accident at only age 30! 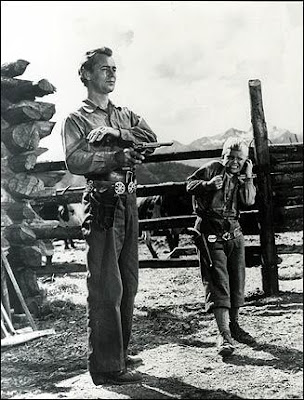 The movie also served to cement the growing reputation of character actor Jack Palance, whose face had been disfigured during WWII. Palance's creepy, malevolent black hand portrayal of the "evil" gunfighter litearlly steals the show. Palance in real life was an interesting man, who attended Stanford University, worked for a while as a journalist in the San Francisco Bay Area, after having been in the service, and for a while as a legitimate heavy-weight boxer in the early 40's. If he hadn't been type-cast as the reliably repulsive villain, he might have had a career as a top-grossing heavy. In my mind, he'll always be the reptilian rascal in Shane, oozing malice and an insane derision for his victims. 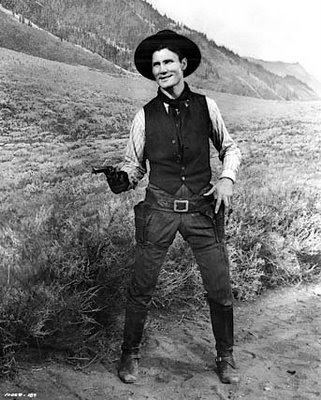 Posted by Curtis Faville at 9:08 PM

was The Queenstown Drive-in

meanwhile not only was Ladd short but also that guy who did Thunder Road was short..

both had to stand on crates or platforms to be higher than anyone else is the scene..

OH Mitchum who lived around here in mid 50's


Hey thanks for the memories

that was some movie...Anita and I hardly saw any of it... never came up for air... or Good n Plenty's

heck I should have married that girl!

after the drive-in we would go to The Hot Shoppes for a Tween Twist, onion rings with gravey a coke and an hot fudge sundae then go park near her house and (...) some more!

Beautiful piece, lots to think about.