The Early Lyrics of Ed Dorn [Part I] 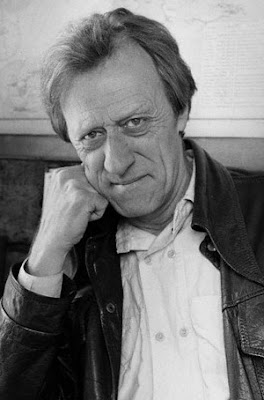 I've wanted to do a a blog essay on Ed Dorn for some time. There were some very unpleasant things said about him over on Silliman's Blog some months ago. Though I'm in no position to, as it were, "set the record straight" vis-a-vis Dorn's official literary reputation, I take immediate umbrage at any attempt to put people off his work based on a few politically correct pot-shots derived from his late, cantankerously uncooperative and mischievously conceived poetic delinquencies.

History is full of naughty poets whose lives were strewn with betrayals, adulteries, crimes of all sorts, whose work we read today with little or no concern for these imagined faults. It is really tiresome to see intelligent people taking polite attitudes with the same pat condescension as ladies in an indignation committee of 1904 against the evils of wearing bustles, or smoking in the street!
In any event, polite conversation aside, I'd like to speak about two favorite early Dorn poems which I've loved for over 40 years, through good times and bad, and which will stand as examples of delicious and honorable efforts long after the ephemeral prejudices of our time have been relegated to the proverbial ash-heap.

The Rick of Green Wood

In the woodyard were green and dry
woods fanning out, behind
a valley below
a pleasure for the eye to go.
Woodpile by the buzzsaw.  I heard
the woodsman down in the thicket.  I don't
want a rick of green wood, I told him
I want cherry or alder or something strong
and thin, or thick if dry, but I don't
want the green wood, my wife could die
Her back is slender
and the wood I get must not
bend her too much through the day.
Aye, the wood is some green
and some dry, the cherry thin of bark
cut in July.
My name is Burlingame
said the woodcutter.
My name is Dorn, I said.
I buzz on Friday if the weather cools
said Burlingame, enough of names.
Out of the thicket my daughter was walking
singing--
backtracking the horse hoof
gone in earlier this morning, the woodcutter's horse
pulling the alder, the fir, the hemlock
above the valley
in the november
air, in the world, that was getting colder
as we stood there in the woodyard talking
pleasantly, of the green wood and the dry.
In country where wood is still a vital commodity--such as in the Northern Rockies, or the Northern Plains States--providing fuel for heat through long winters, an encounter like this would certainly be familiar, though to most Americans today, it has a slightly Gothic feeling, discussing kinds of woods as one would boxes of laundry detergent. What I find attractive, aside from this rural American simplicity, is the clarity of the language, spry and lean, brief and to the point--qualities which Dorn uses explicitly and consciously.
The poem is a free verse lyric of some delicacy. The play of the syllables against the duality of the open vowels is handled nicely: The green wood and the dry, splitting the compounds and dangling the modifier "dry", which sound is picked up repeatedly ("eye", "I", "die", "day", "Aye", "July"). The reference to the wife's tenuous waist ("her back is slender // must not bend her") echoes the thin attenuation of branches. The gentle, deft surprise of the line-breaks ("behind/a valley below/a pleasure for the eye to go"); the sweet pull of the drawn out parallels ("I want cherry or alder or something strong/and thin, or thick if dry"), or/or/and/or, and the lovely sequence of two dactyls ("cherry or alder or") followed by three trochees ("something strong/and thin, or thick") interlocked with two iambs ("and thin, or thick if dry"), the sense of a list turned out in the final slanted syllable ("dry"), played against the two nouns, two adjectives, then another two adjectives:
I want - cherry or alder or something strong
/   /         /    -   -    /    -   -      /         -         /
and thin, or thick if dry
-       /     -      /      -    /
Then "or thick if dry // my wife could die" creates an expectation in the next stanza that "the wood I get must not" would unconsciously lead to (echo) "be green", except we get instead "bend her too much" so the green (a color and a quality of flexibility) is held invisibly by the denied anticipation. The woodcutter's "Aye" throws a bit of colloquial Briticism by way of Kentucky into the mix: The woodsman begins to acquire a sort of mythic dimension perhaps composed in equal parts of Paul Bunyan and the gamekeeper of Lady Chatterley's Lover. The picture is of a wholly controlled and self-contained ideal transaction removed from the cant and chicanery of late capitalist intercourse, "in the november/air, in the world, that was getting colder". An English lyric reformulated on American ground, its circumscription aerated with Western space, oscillating with faintly medieval (14th/15th Century) echoes.
Posted by Curtis Faville at 9:38 PM


remember that "thing" he and Diane diPrima did at that Museum re:


some guy there connected w Wingbow gave me two of the posters... 1978!

and re-treat into my yes-ter-yore!

i've got to read more dorn