For the Love of Dictionaries - Simon Winchester's The Meaning of Everything

I think that many people glibly assume that the language we speak must have been around forever, in much the same shape and condition it is today, and that if it needed tending or grooming, there would be some dusty grammarians to take care of it for us, so that we wouldn't have to be bothered worrying about it.

Well, it turns out that language is much slipperier than you might have supposed. The problem with it is that people use it, and the first thing you know they're twisting it and abusing it and spinning it and making mistakes over difficult passages and words, and just generally raising hell with it. They don't mind.

Was language invented, ready to use, or did it just develop gradually over time? Language was first oral, of course, and only later did people invent written symbols to record speech.

Sitting at your desk, casually reaching for your Webster's Collegiate to look something up, it's hard to imagine that someday, long into the future (but not that long), the language we speak will be just a remote memory in the historical record, unspoken even by scholars of dead languages. Human life is fragile, brief, but the language we speak isn't much sturdier, or resistant to transformation. Languages aren't reborn, they just either die or metamorphose into other, later (eventually unrecognizable) versions of themselves, or merge and mix with other tongues. Samuel Johnson's English Dictionary was by no means the first serious attempt to codify and describe the language of his day, but it was the most widely appreciated and impressive achievement in the field of English lexicography up to the time of its publication. It was vastly influential upon all spheres of society (the arts, commerce, law, politics, thought, etc.), and set a standard which later authors of dictionaries had to observe. 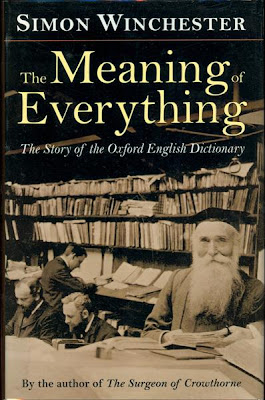 I've lately been reading Simon Winchester's brilliant account of the compilation and writing of the New Oxford English Dictionary, The Meaning of Everything. Winchester is a sort of English John McPhee, taking on big subjects, and writing book-length, in-depth essays on them. He just published a big book on the San Francisco earthquake of 1906; PBS televised a documentary of his research sojourn in San Francisco a couple of years ago. Surprisingly, the story of the OED project is a fascinating one, from its inception in the middle of the 19th Century, to its eventual completion, with the publication in 1929 (12 volumes). The white-bearded figure on the cover of the dustjacket (pictured above) is James Murray, the man who eventually, as head editor (from 1879), got the project moving in the right direction, though he didn't live to see it completed. The task involved the participation of hundreds of "readers" who slavishly pored over specific texts, recording usage and applied meanings on special half-sheets, which then were sent to Murray's residence, and then sorted, categorized and finally edited by Murray and his team in a building called the Scriptorium.
J.R.R. Tolkien worked as a reader towards the end of the project, researching etymologies of the Waggle to Warlock range. The second edition was published in 1989. I'd love to have a set of this edition, but I can't imagine where I'd keep it.
I didn't become interested in etymology until the 1990's, when I began to deal in rare books. Dictionaries, like the languages they codify and define, decay with time, eventually becoming obsolete. They are monuments to memory and optimism, inasmuch as they may influence the development of language, but they can't prevent it from changing. Etymology may be a science, but it's primarily descriptive.
I've spoken on this blog several times about the utility of speaking (and writing) correctly and coherently. But it's a losing battle. Just last night I squirmed uncomfortably in my chair as the San Francisco Giants announcer kept repeating the phrase "he's not that good of a base stealer"!  "good of"?? This is a man who speaks publicly (describing games) on the radio for a living. And yet he's incapable of using simple English that any middle-schooler should know by heart. This isn't just a failure of our institutions of learning, but of a lazy attitude throughout the media.
Kids who live in tough ghettos may be forgiven for not hearing the language spoken well enough to inculcate correct grammar and pronunciation. But anyone who attends school through the 10th grade should be able to communicate accurately in ordinary conversational English. People will argue that local or ethnic adaptations of the language have just as much integrity as "properly" spoken language. But language mutation which occurs through ignorance, or even willful ignorant misuse, is a poor generator of effective speech.
New coinages are appearing all the time, to replace words that are dying and falling into the oblivion of non-usage. Someday, the language we speak today will look as peculiar and eccentric as Chaucer's English does to us. It's a daunting thought. A vigorous and effective language is a reflection of the health of a culture. When people habitually abuse their tongue and are unable to communicate accurately, it's a symptom of a larger problem. Ever listened to poorly educated people try to work a problem out, or settle an argument? It's like trying to perform repairs on a complex engine without having any tools. You can try to improvise, using your fingers and hands, but you wouldn't succeed. There's a moral imperative to good usage.
Posted by Curtis Faville at 5:00 PM

Another good one: K.M. Elisabeth Murray, Caught in the Web of Words: James A. H. Murray and the Oxford English Dictionary (Oxford: Oxford University Press, 1979).

I’ve admired your poetry from way back and just found your blog.

How would Ted Berrigan's sonnets hold up in terms of "accurate communication"?

Most people even today can't understand what they're on about. In a hundred years you say that we'll be about as bonkers as Chaucer to others.

And yet, there are sentences in Shakespeare that are terribly clear:

Lady MacBeth's not talking to a dog.

Kirby: I could answer your question in a number of ways. Art (literature) isn't "just about" communication. Poems are "things", not train schedules or drug prescriptions.

Chaucer wasn't "bonkers" and neither are we. How we speak changes over time. Chaucer and Milton and Shakespeare and Tennyson and Eliot all speak to us--we're close enough to them in lexicographical "time" that there's little barrier. But give it another 200 years, and Chaucer will probably be incomprehensible, even with cribs.

I think there are, however, people who would disagree about that. With the shrinking of the globe, speed of communications and consolidation of culture and media, it may well be that there will develop some kind of ur-language, a mix of all the existing languages in the world, at some point in the future.

The modern age has brought us many nice things, but it destroyed--or will soon destroy-- provincial differences. If everyone intermarries, and speaks the same language, and is governed by the same power--how dull the world will be!