The Talented Mr. Ripley - The Romance of Europe in the Fifties 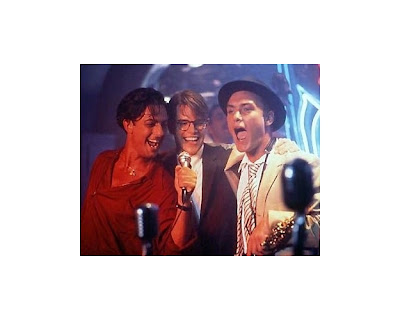 I'm not sure why certain movies speak to me, while others--much more touted and praised, often by people whose word and tastes I take for granted--leave me cold.

The Talented Mr. Ripley must be one of the "guilty pleasures" which have roots in one's subconscious that one doesn't normally credit, but must honor, like the attraction one feels for a naughty dessert, or some other forbidden indulgence.

To one who grew up in the 1950's, in a family which could reasonably be described as poverty-stricken, Europe was a romantic fantasy. We would have had about the same chance to go to France or Italy as we would have to go to the moon, and no one had yet been to the moon in the 1950's. That would have to wait another decade. It wouldn't be until the 1980's, that I would get there--to France, Italy, England.
The Talented Mr. Ripley [1999] is the story of the birth of a criminal, or of a criminal mind. I hadn't read anything of Patricia Highsmith's when I first saw the movie, but of course she was a well-known mystery-crime author for decades. (I once had a chance to pick up the British first edition of Strangers on a Train for less than $200, a failure I now count among my chief mistakes as an antiquarian bookseller.) Tom Ripley is a chameleon of a man, adept at imitating people, ingratiating himself into confidences, not averse to a little slinking larceny. Almost incidentally, he's picked (and generously bankrolled) by a rich shipping merchant in New York to go to Europe and try to convince the magnate's wayward son Dickie to return to America and take his rightful place in the company business. Before he even has the time to congratulate himself on his good fortune, he's sailing to Italy.
Though the plot of the story is a classic noir thriller, it has deeper levels of meaning. Highsmith was an interesting person in her own right, an American who grew up in Texas, but ended up living most of her adult life in Europe. The book is, among other things, a parable on the theme of "old" and "new" world culture, one explored by many serious writers, including notably Henry James, Edith Wharton, Hemingway, Fitzgerald, Boyle, James Salter, Mavis Gallant, John Cheever, etc. She was also a lesbian, a fact which finds its way subtly into her work.
Europe is familiarly represented in the movie as a corrupting playground, whose cultural milieu is steeped in moral ambiguities, beautiful, seductive, gently decaying. Dickie, the spoiled rich boy liberally spending his allowance on sailboats, spiffy seaside villas and the good life, has a fiance (played by Gwyneth Paltrow), and a playboy friend Freddie Miles (Philip Seymour Hoffman). Into this sybaritic menage Tom enters, obsequiously at first, but insinuating himself gradually into their confidence. Tom's relation to Dickie has certain vaguely homo-erotic undertones. In a startling turn, after arguing violently in a small outboard motor boat, Tom accidentally kills Dickie with a long paddle. Sinking the body and boat offshore, he decides, then and there, to assume Dickie's identity, switching passport photos. The balance of the story involves Dickie's escapades in maintaining his two separate identities, while interacting with others who know, or know of, both men. Eventually, Tom kills Freddie, as well as another of the group, Peter Smith-Kingsley, with whom he has a homosexual relationship, at the end. Greenleaf elder decides to gift an annuity to Tom, not realizing he's his son's real killer. 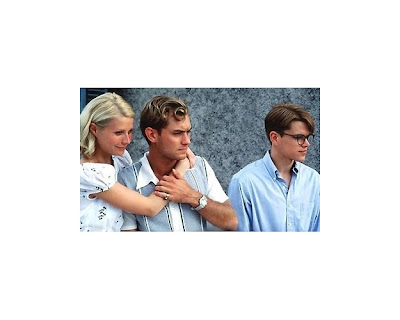 The character of Tom is one of the most fascinating in all of cinema, if not of genre literature. Highsmith went on to develop the character of Ripley in several other books, following him as he turns into a full-fledged arch-villain. The birth of Ripley, here, shows us how the criminal mind seizes on opportunities, which then devolve into dilemmas of escape and assumed identities, more elaborate strategies of subterfuge, deception. Tom's fundamental nature is to mimic, to pretend. These are the same skills one uses in acting. Matt Damon might seem a poor choice to play this role, given his clean-cut good looks, but he brings it off masterfully. Jude Law is equally impressive as the spoiled rich-boy, selfish, cruel and impulsive. Paltrow, whom I do not like in this role, is a bit pale and limp, but then, that's basically the character she plays here--she's Dickie's willing plaything. Much more impressive is Cate Blanchett's portrayal of Meredith Logue, another American heiress in search of a husband; her sad fey innocence and unconscious superciliousness make a deft study; Blanchett's career is already in high gear; there's almost no limit on what she might achieve in the coming decade. Hoffman's creepy philandering American playboy is also nicely done--as usual, he uses his slightly pudgy, freckled demeanor to good effect: He makes your skin crawl.
Jack Davenport (Smith-Kingsley), Celia Weston (Aunt Joan), James Rebhorn (Herbert Greenleaf), and Seergio Rubini (Inspector Roverini) are all brilliantly cast and directed. I am not sufficiently familiar with Anthony Minghella's work to comment intelligently on it. He directed Cold Mountain and The English Patient, both signal efforts but not among my favorites.
The atmosphere of seductive elegance, deception, malevolence is artfully presented here. Our fascination at following Tom through his tortuous pathway towards a life of successive crimes and exploitations is the classic identification with the fallen angel, whose attempts to subvert the economic and class distinctions, of a world of pleasure and opportunity otherwise closed to him, is one that inspires a natural sympathy, even while we abhor his acts of violence and trickery. It may be this class envy which metaphorically vindicates Ripley, made easier by the slightly sleezy, haughty condescension of the pampered young jet-setters--maybe they "deserve" what they get. Their credulity is presented as a weakness, even as we may admire their sweetness and innocence. They're the perfect victims for Ripley.
Posted by Curtis Faville at 8:24 AM

I've read all of the Ripley's. In R's game he deliberately kills Dickey -- hitting him repeatedly with the oar, because he already has figured out how to fake his signature, and has nothing to lose. His life is horrible, and he at least wants to dine out, and wear good clothes.

You get only a few instances of Ripley's childhood in the books. His parents died in a car crash, and left him with an aunt. The aunt was sadistic, and often made him run behind the car while the car remained just out of reach, as he ran and ran, crying, to catch up.

Part of the story is that he is tired of the humiliations he's had to suffer and wants the money Dickey Greenleaf has in order to prevent any such future humiliations. Even the slightest hint of a humiliation kicks off a vicious vengefulness, but if you know this little tidbit aboiut his childhood it makes his quickfire temper, and clever plotting make more sense?

My favorite film of all time is another Ripley by the German director whose name starts with a W. Spent the whole day at the shore and got pulled out to sea by the current, and had to swim for a half hour against the current to get back in. Wiped out, I guess, though never in any serious trouble.

It has Bruno Ganz and Dennis Hopper in it. Oh, if you love Ripley, you got to see that one! Maybe you've seen both. It's taking place later in ripley's life. He's a fraud, but believes that everyone else is a fraud, too. He's running a gallery that specializes in selling fakes.

Wim Wenders' film (it just came back) is actually better than the book. It's very stylish and much better than any of his subsequent films.