Wynn Bullock [1902-1975] is recognized as one of a handful of visionary photographers working along the California coast after the War, whose images command immediate attention across the spectrum of popular and serious academic audiences. Working alongside contemporaries including Edward & Brett Weston, Morley Baer, Imogene Cunningham, Don Worth, Minor White, he carved out a niche composed about equally of technical mastery and inquiry, visionary insight, and a strong sympathy to the human condition in nature. Unlike many of his contemporaries, the number of his signature images is small, but their power is undeniable. Unlike Brett Weston, for example, whose exploration of abstraction in nature is almost purely graphic (not symbolic), Bullock has clear philosophical purposes inside and alongside his images. The famous photo of the tree in fog against a backdrop of sunlight piercing clouds provides a dramatization of striving and agonized tragedy as a dialectic between the knarled dead oak branches and the tangled obscurity or the romantic atmospheric mass beyond. 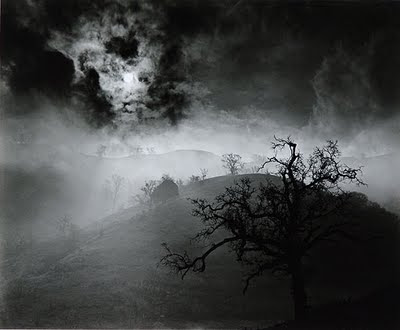 Bullock was interested in the tension created between "rough" nature and vulnerable human nudity, which he sought to capture in various moods. There is never anything vicarious or prurient about Bullock's nude studies; they're invariably "staged" with care, and intended to exploit specific differences in scale, texture or context. 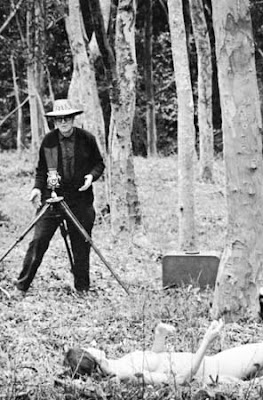 The famous image below--which carries profound qualities of Biblical (or Miltonic) overtones--is startlingly alive and pungent. Who can not look at this photograph for the first time without being swept away by its pure audacity and ingenuity? The child's nudity within the pristine carpet of soft greenery is both comforting and terrifying at once. We see immediately that it's a constructed setting, yet it's a testament to the artist's insight that the "message" is more sincere than any reservations we might have about its "artificiality" or "staginess." 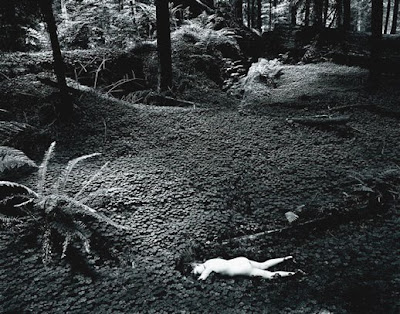 Many of Bullock's images seem to possess a metaphysical, visionary quality. The picture below has an astronomical quality, as if we were looking into a magic window into the universe, as asteroids and gallaxies collide and spin about, with random particle collisions and trails criss-crossing a void. We "know" consciously that what we are looking at isn't any of these things, but there is a sense of a vouchsafed "presence" which the subdued tones and surreal design provoke in our imaginations. It's one of the great "honest" visionary abstract images of all time. 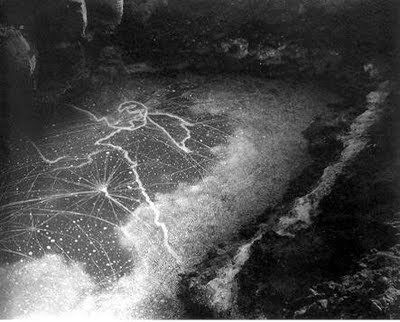 It almost seemed, during the 1960's, when many of these images were coming to public consciousness, that Bullock had captured the "spirit" of the counterculture. People would often say how they seemed to represent Zen-like "koans" or masterful gestures or insights into human or universal consciousness. The deep "Ah!" of perception. 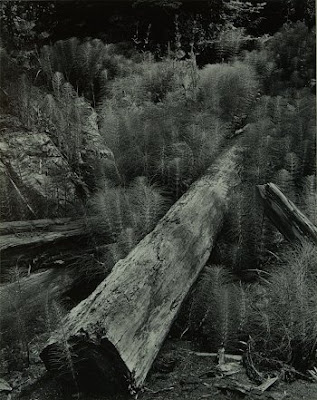 On one level, this kind of mythologizing of image can have a negative effect on our apprehension of form and meaning. But in Bullock's hands, we are in a position of trust. We sense a level of sympathy, gentleness, and care both for the purposes to which matter and form may be put, as well as a resolve to make out of this life a statement of abiding truth and nourishment of the spirit. 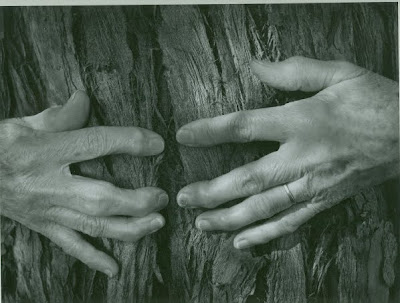 Posted by Curtis Faville at 8:31 AM

Color work is its own genre.

I had an art drawing instructor once who said "color is nothing but 'eyewash'". What he meant was, that the essential forms and outlines of reality could be accurately reported without recourse to the color palette.

Can color itself by the "subject" of a work of art. Obviously, it can, as was achieved in the work of Rothko or Barnett Newman. Obviously, any art which consciously excludes color risks one-dimensionality.

But it's the same as with painting. Color work allows for interesting explorations. There are many more things to do. It's best to approach color work the same way you do black & white. Is it intrinsically interesting, and on what levels?

Thanks Curtis, this is wonderful, your in-sight (for sight) commentary, dialogue with these photo-graph{s}.