Paul Caponigro -- What Is and What Is Not 'There'

Paul Caponigro [1932- ] has been for several decades one of America's premier landscape photographers. Originally a disciple of Minor White, Caponigro has continued to refine the spiritual or mystical side of black and white imaging, well within the tradition of clear focus, which has dominated serious art photography since the 1930's. Caponigro's work hasn't been limited strictly to landscape as subject, as he has carried on a parallel investigation into arranged still-life, though, again, well within the naturalistic tradition of flowers, rocks, leaves, screens, etc., unlike the artificial applications of some post-Modern practitioners, like John Pfahl, for instance. 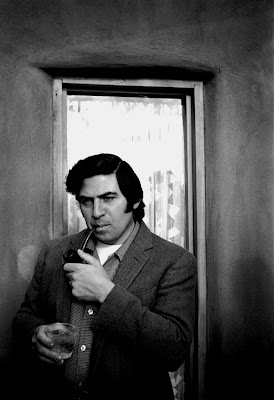 Caponigro circa 1974
But Caponigro's "mysticism" isn't specific to a discipline, as his mentor White was--frequently making direct references to Zen or Gurdjieff. Caponigro has been quoted as saying that White felt a necessity for a philosophical justification or underpinning for his photographic statements, whereas he (Caponigro) doesn't. Nevertheless, Caponigro has frequently expressed his approach to image-making in this way: "One needs to be still enough, observant enough, and aware enough to recognize the life of the materials, to be able to 'hear through the eyes'." The musical metaphor is relevant, as Caponigro has been a pianist all his life. 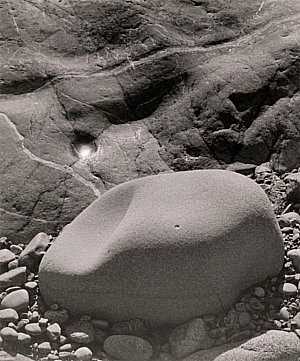 Speaking generally, Caponigro's work has always had a certain restrained quietness about it. He's not out to capture the most dramatic scene, the big all-encompassing vision of grandness and operatic fulmination. His work has, from the beginning, been about the intimate regard for a suggestive quality in the material world, frequently discovered by accident, or through the examination of objects discretely posed. His images usually set up a dialectic between opposites:  Light & dark, near & far, attraction & repulsions, familiar & bizarre, large & small--but almost always, one is tempted to linger. The images invite, but they seldom overwhelm your attention. The point seems to be to instigate a relaxed, leisurely meditation from a neutral vantage, to open a clear line of communication between thing and mind, allowing nature and form to "speak". 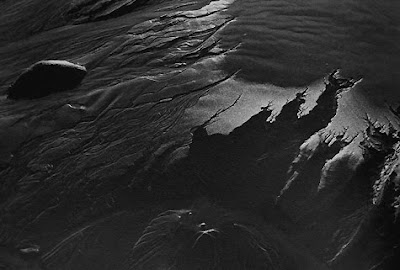 Revere Beach, Massachusetts 1958
Formally, Caponigro's images have a "roundedness" or "wholeness" and balance--typical of Weston and his followers--which keeps them on an even keel. They don't challenge your sense of the dimensionality of vantage, or of the viewer's "permission" with respect to what's being presented or proposed. His abstractions don't make subject-matter irrelevant, but preserve objective identity:  Things are what they are. Beyond this, they may simply suggest further metaphorical alternatives: The picture of an apple--its white-dotted shiny skin--may suggest a galaxy, the apple of a god's eye, the universe in piece of fruit. 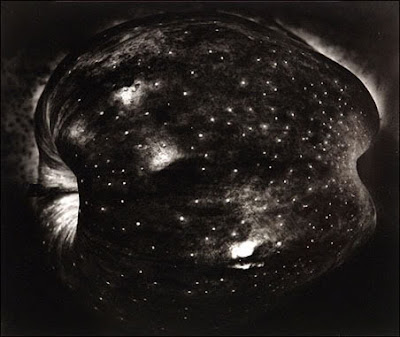 Apple, New York City 1964
Caponigro has made photographic pilgrimages to remote places:  To England to photograph the "megaliths" left by pre-historic peoples.  To Japan.  And he lived for several years in New Mexico, whose dramatic, dry landscapes were so unlike his native New England. 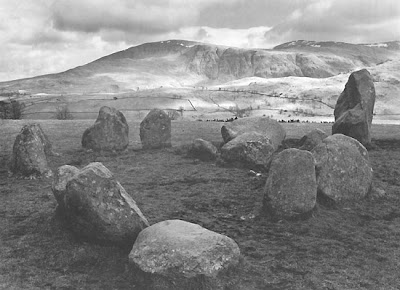 Inner Stone Circle, Castlerigg, Cumberland, England 1977
Caponigro's skill--to evoke a quiet sense of presence within the frame that both demands our attention and curiosity, while not insisting upon any partisan interpretation--clearly derives from his reaction to the pretense (noted earlier re: Minor White) of specific pointers. His titles are dry, but without connotation or suggestion. Landscapes may be "beautiful"--as the above image taken in England is--but they have something to tell us. But what? The message seems to be that, unlike the peremptory chance of the "captured" moment, the visual experience requires patience, and relaxation, and openness. We must be willing to allow the silence of a purely visual apprehension to enable us to absorb the relationships of things as they present themselves, on their own terms--their weights and situation, their placement(s), the forces which influence them, how time and decay and use have molded and shaped them.
What is: The residual evidence of the inertia of time. What time throws up on the shore of the crumbling present, the hiss and fission of foam, dragged back under by the inexorable inertia of the forgotten, the abandoned. Time leaves us: From the moment of our birth(s), we are leaving all this, in a slow, gradual elegy of image, sound, sensation. Photographs are the ghosts of that memorial, the gallery of fleeting moments. 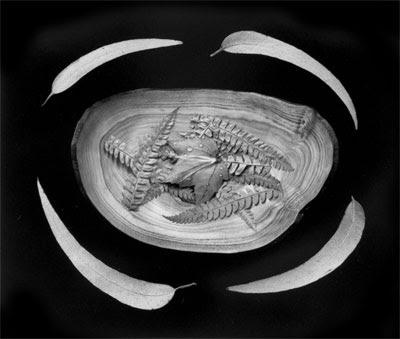 Eucalyptus and Fern 2004
Posted by Curtis Faville at 8:41 AM