The Discrete Delicacy of David Gitin 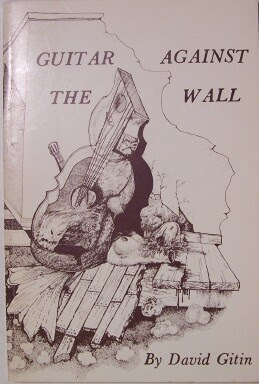 Back in the 1960's, there was a lot of interesting new poetry being written. Hah. Is that an understatement or a joke? A lot of little publishers, little magazines, underground stuff kept popping up. The mimeo revolution.

yes. yes indeed. for some reaso (I can't recall why) David and I connected for the first time a year or so ago via a cpl of emails (or maybe it was on/in facebook as "friends" which I wasn't part of then and have dropped it now so
I think a friend who knows him and his work most likely connected us...
however.. see this mag (1970) that he edited and or just email him
I got an issue of AMPHORA around here somwear:
...AMPHORA...

Hardy Boys, cotton candy, juke boxes—straight out of my 60s life too. I recall how particularly proud I was for having devoured the most Hardy Boys novels in a month: I may still hold that record in my grade 7 year!

Gitin today might just be read as "kitsch", the fate of anything that's appreciated in retrospect (Jameson)You're right to have pointed up the "Pop Art" associations as if the poet had foreseen that his verses might be seen this way.

The critique of "jukebox" is reminiscent of Walter Benjamin's view on art as "mechanical reproduction", the jukebox having lost its "aura" for us today.

Thanks for the tip, Ed.

Thanks for the review. I didn't find the examples compelling enough to want to try the book. The poem I liked very much was "Carpenter". That had some suggestiveness to it; and the feeling of a world larger than the poet. The rest (among the examples you gave) didn't do much for me.

But that's only my own impression. I can see how his poetry might appeal to others and wish him success.

Gitin's work is very approachable. It doesn't try to impress with complex, dense arguments, or wordplay.

He's non-traditional, without rhyme or the usual scanned patterns.

Each of his poems is unique.

This book is very old--having come out 37 years ago!--I doubt whether the author thinks about this book the same way now as he did when he first wrote the poems in it. But it's been a favorite of mine, and I thought it deserved a plug.

//It doesn't try to impress with complex, dense arguments, or wordplay. He's non-traditional, without rhyme or the usual scanned patterns. //

Complex, dense arguments, or wordplay are not requirements for me. Neither are rhyme or the usual scanned patterns. The others poems didn't engage me for other reasons.

However, I didn't realize the poems were 37 years old. I mistakenly interpreted your post. My bad.