Perhaps, not surprisingly, to my way of thinking, Billy Bob Thornton's Sling Blade [1996] reminded me of Jarmusch's Down By Law [1986] made just ten years before. Both films combined direction and screen writer, both were made in gritty black and white, and both had that verite edge to them, with low-life settings, and a persistent, lurking undertone of violence. Also, the central character in each--Thornton in Sling Blade, and Tom Waits in Down By Law--had deep, grumbling voices--in the case of Thornton's performance as Karl Childers, it was affected, a part of the portrait of the mentally disturbed ex-convict and murderer at the center of the film's action. Thornton isn't the first to have essayed the role of a kind of physical-mental freak--there have been many earlier attempts at this in the history of theatre and film, but few if them can have been as demanding, as uncomfortable, or, ultimately, as rewarding as this one. The performance required Thornton to protrude his lower jaw continuously during his scenes, in imitation of the retarded facial set of Childers. His voice modulation was easier to accomplish, but the whole task had very much the quality of a method acting exercise, in which the actor completely inhabits the mind of a lower order of behavior (not unlike John Malkovich's performance as Lenny in Of Mice and Men [1992]). I tend to think of performances like these as feats, or tours de force, in that they almost transcend the vehicle for which they're designed, like Anthony Hopkins's portrayal of Hannibal Lector. Ultimately, this becomes not an exercise in rote ventriloquism, but a study in gesture and verisimilitude. Thornton should undoubtedly have earned a Best Actor award for it, instead of the guy in Shine.
The film, in addition, featured the work of young Lucas Black, a child star just bursting with talent; this was his first important movie role, and it set the tone for a whole career. Fans may remember that he also was in All the Pretty Horses [2000] and Crazy in Alabama [1999]. As the young rural Huck Finn rendition, here, he's perfectly in character, his native Georgia drawl fits right in.
As a child, I had the occasion to know someone not completely unlike Karl Childers, someone whom I thought I understood, and felt a friendship with; in those days, I tended to take sides with underdogs, and underdogs is just what people like this inevitably become in the world, through rejection, contempt, and abuse. 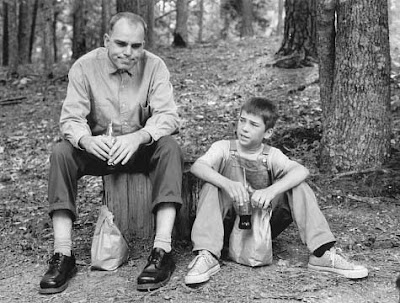 Thornton's film is a kind of morality play, in which a retarded killer is released back into the community, with all the suspicion and risk associated with that decision, who eventually prosecutes his own kind of "justice" by killing a deeply evil man, precipitating his permanent return to incarceration. Childers's affection and regard for the family which "adopts" him, is balanced by his inability to understand higher principles of forbearance. But Thornton's message seems clear: This is the Biblical style, where violence is done in the service of a greater good, by someone whose moral sense is right at that unsophisticated level of comprehension.
And unlike Steinbeck's Lenny (in Of Mice and Men), Karl doesn't kill Doyle Hargraves for the wrong reasons: The final act is almost a ceremonial execution, as Karl, grunting with concentration, quietly announces "I'm goin kill'ya."  We feel that Doyle deserves this, even if we cannot condone Karl's behavior. It's a classic good-comes-from-evil morality play.
I found the movie vastly entertaining, and Thornton's performance astonishing. Is the movie a cautionary reminder of the dangers of letting disordered souls into the world? Not really. Was it inevitable that Karl would "hurt" someone, without a logical motivation? Perhaps. But Thornton's message seems to be that understanding and care and persistent teaching can save such people from their own twisted, maimed inheritance. The movie works at that level too, quite amazing for a movie of such seemingly limited aims.
Posted by Curtis Faville at 10:53 AM

'both were made in gritty black and white'

the Slingblade I saw was in color.

Somehow, it seems like it ought to have been in black and white, no?

I think that that rich guy Ted Turner who has bought up our National Film Heritage... for a "song"

colorizes things so's he can sell (what he thinks people want) colorized versions of EVERYTHING...


next thing you'll see is a colorized version of...

It's a Wonderful Life

and Miricle on 34 th Street
and that Christmas favorite about the little girl whose mother doesn't believe in Santa until The US Post Office "proves" it!

Or Robin Hood in COLOR!

Malk. did pretty well, but as with many Ho-wood treatments of working class themes the actors seem to try too hard, or somethin' Overacting, maybe. (tho' Slingblade I haven't seen as of yet).

Of Mice and Men had a certain power, but...already dated. Maybe in the 30s that quaint Steinbeckian world existed--not so now. Imagine it or "Grapes" retrofitted with immigrant workers, massive agri-businesses, toxic pesticides, union battles, cops busting heads, the mafia, mamacitas out in the fields, etc.