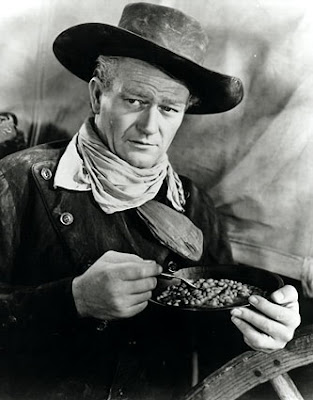 Red River [United Artists, 1948, filmed in 1946], directed by Howard Hawks, adapted to the screen by Borden Chase from his Saturday Evening Post story, is perhaps Hollywood's major effort at romanticizing the American West, the culmination of 20 years of Western-movie-making. There are many--serious critics among them--who seem to believe that The Searchers [Warner Brothers, 1956, John Ford directing] is John Wayne's premier performance, but I've never been able to understand, or appreciate, this opinion. John Ford's reputation for directing Westerns notwithstanding, Red River is certainly a more ambitious, lyrical and complex piece of cinema than anything Ford ever made.

Red River is the movie that the kids in Larry McMurtry's classic movie adaptation The Last Picture Show [1971, Columbia] screen to commemorate the closing of the local movie theater. No one knows more about the history of the Western genre than McMurtry, and the "last" picture show stands not only for the end of a whole era of Texas romantic nostalgia, but of the end of America's dream of the "olde West." 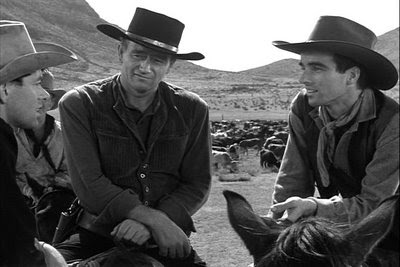 The attempt to portray the exploits of prairie cattle-ranchers as heroic and picturesque was well-established by the time of the film's production (in 1946), but this was the first instance, really, that sufficient means were employed to bring to full fruition a vision of the sweep and scope of landscape, the size and scale and grandeur of the first cattle drive from Texas [in 1865]. The inspired cinematography and musical score--a great one by Dmitri Tiomkin [High Noon ("Do Not Forsake Me, Oh My Darlin"), The Big Sky, Giant, The Unforgiven, The Friendly Persuasion, as well as the familiar TV shows Wild Wild West,  and Rawhide themes]--hold the sprawling concept together, unifying the action with a mythic trope.
Following the economic devastation of the Civil War, the market for beef in Texas had deteriorated. Texas had only become a state--was in fact "annexed" by the U.S.--in 1845--before seceding in 1861 as part of the Confederacy. The story, then, takes place right in the middle of a historical turning point, just as the "open range" (and the Mexican "presence") as a concept is being superseded by fixed boundaries and clear jurisdiction (The Compromise of 1850 reconfigured the State of Texas into its present shape). Dunson [John Wayne] and Groot [Walter Brennan] turn South from their westward-bound wagon train to settle in the Texas territory in 1851, and 15 years later begins the tortuous cattle drive--necessitated by the need to transport beef to markets in the North and East, connecting to mid-continental rail line routes--that is the ostensible focus of the narrative. The informal "adoption" of Matt Garth [Montgomery Clift] by Dunson contains all the classic step-relation tensions of illegitimacy, sexual competition, and disputed inheritance. Dunson has lost his sweetheard to an indian raid on the wagon-train he abandoned, and he's the bitter old grieving widower. Later, when Matt falls in love with Tess Millay [Joanne Dru]--in another indian  battle with a wagon-train--Tess offers to sleep with Dunson if he'll give up his vendetta against Matt (who's "stolen" the herd from Dunson in mid-journey).
During the drive, Wayne's portrayal of the hardened older Dunson is the best acting of his career. Only 39 at the time, Wayne's version of a man in his sixties is completely convincing, a leathery old patriarch, a law unto himself, whose meanness and cruelty drive him to acts of unreasonable violence and revenge. As the hardships pile up, and hired hands begin to rebel and leave, Matt finally takes over the drive from a wounded Dunson, who in turn vows to kill Garth when he catches up with him. The tension here seems to transcend their step-parent/foundling relationship: Matt is no longer the sulking young would-be gunfighter, but an adult with a will and purpose of his own, which Dunson refuses to acknowledge. Would the relationship be different had Matt been Dunson's real son? 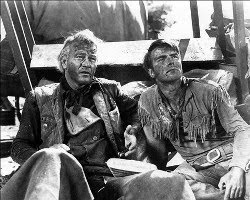 After the drive finally reaches Abilene, and the herd is sold, the two have their big showdown. In the final scene of the movie, Dunson [Wayne] is bearing down on Matt, preparatory to a gunfight. In the famous sequence, Wayne strides purposefully towards him (to the stentorian chanting music of Tiomkin) , but is interrupted by Cherry Valence [John Ireland], another gun-happy slinger hand whose thrown in with Matt. As Cherry draws on him Wayne wheels, fires, killing Valence, who manages to wound Wayne. Hardly missing a beat, Wayne keeps going, and finally faces Matt, who refuses to draw. Wayne fires several warning shots, but Matt holds his ground. Wayne slugs him a couple of times, then at last Matt hits back, knocking Wayne down. Just as things seem on the verge of tragedy, Tess [Dru] fires a pistol in the air and demands that they stop. In an atmosphere of synthesis and sublimation, as the two exhausted men lie bleeding and disheveled in the dirt, Dunson [Wayne] capitulates to fate, and, in one of cinema's most stirring moments ever, draws a new version of the Red River brand design in the sand, adding Matt's initial to his own on opposite sides of the line signifying the river symbol, concluding with the words "You earned it." 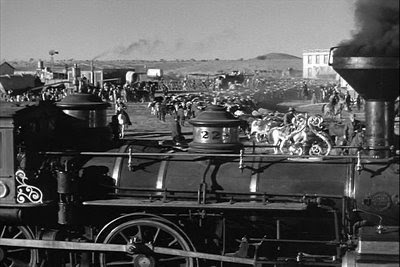 I can still remember clearly how powerfully that ending struck me when I first saw it in the movie theater as a boy. As the step-son of a much older than usual man, I wanted very much to be worthy of his regard and judgment. Though the terms of that conflict were different, the essential psychological outlines of our relationship were almost identical to those in the movie. I would never succeed in pleasing him sufficiently to deserve the "You earned it" encomium of approval which my oedipal demand required. That I perceived the dialectic in these terms goes a long way towards defining the psychic paradigm the movie explores. Boys wanting to be men; men wanting to be virile; and ultimately men wanting and needing love and confirmation but unwilling to ask for it.
Posted by Curtis Faville at 7:31 AM

this is
probably
the greatest cowboy movie
ever MADE!

when i am
tomorrow

I will read yur essay.