The Austere Hedonism of Luis Barragan 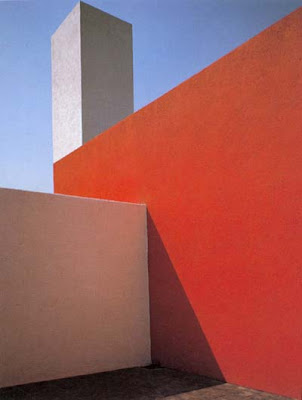 Creative architects often lavish their most innovative first efforts on their own properties. Lacking an inspired client, at the beginning of their careers, they are often obliged to be their own entrepreneur, out of necessity. Often, the clearest expression of an architect's vision is an early work, done with no restrictions or distractions of program. Luis Barragan is a special case. Self-trained, a native Mexican without access to high-end corporate clients, he nevertheless came under the influence of early Modernist figures and styles--including Corbusier, whom he came into contact with following study as an engineer, during the 1920's. 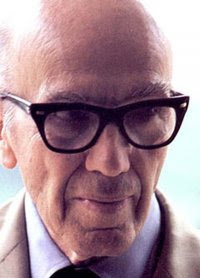 Mexico is a poor country, and this may explain in part why there were so few commissions for its country's greatest architectural genius. But Barragan's signature originality--the way he was able to interpret European Modernism, to adapt its superficial effects to his indigenous nativist cultural milieu--will always perhaps remain a mystery. 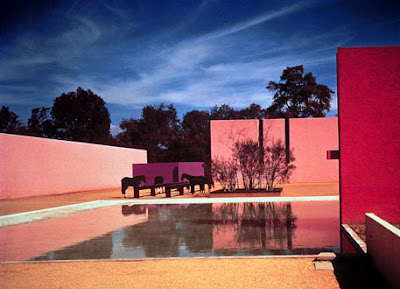 Barragan's minimalism--so-called, I would wager, because those who formed a cursory appreciation of its stunning and slightly unreal qualities could think of nothing better to call it--was the adaptation of a very few simple principles to the materials and setting of his own Central American architectural traditions. 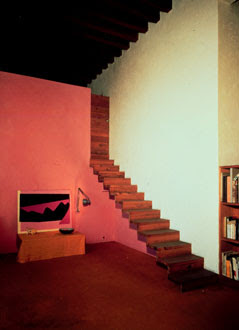 Recognition came late to Luis Barragan [1902-1988]. It wasn't until his 72nd year that the Museum of Modern Art in New York mounted a retrospective of his work. The Barragan house, which is the ostensible subject of this blog, was built in 1948, when he was in his mid-40's, and most of his surviving projects were constructed after that date-- 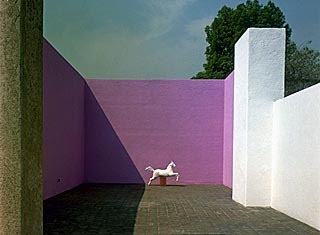 --which may account for the confident solidity and strength of his work. It looks and feels like the realization of a fully formed intellectual position, which has absorbed the best of the Modernist tradition--not just Corbusier and Gropius and Mies and late Wright and Kahn and Johnson and Loos and Neutra, but Gaudi and Portman too--and come out the other side with a purified distillation of a vision of space and color and passionate living that are uniquely his, as well as belonging to Mexico. 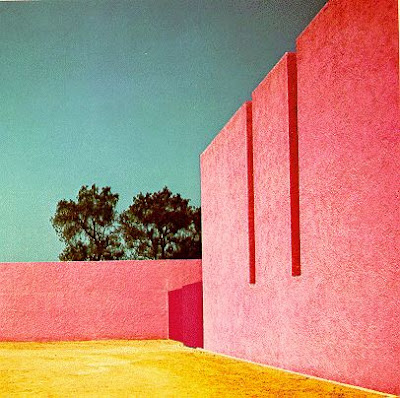 Earlier [post for April 8, 2009], I admired the color and joyful exuberance of Frida Kahlo's textile designs, which spoke to her Indian artistic roots. Barragan's application of the same qualities of bright pastel, broad, stark strokes, and a certain linear cubism, fall well within one's sense of the possibilities of a New World tradition of design, drawing on peasant traditions and simplicity, while incorporating some of the most sophisticated elements of Modernism's acutely abstract austerity.
Barragan's house, which has been photographed many times, from many angles, adopts the visual language of de Stael and Corbusier's surburban villas, as well as the heroic aspects of mathematical concision and elegance which characterize the best of the Modernist projects, applying it to stucco and walled interior courts and gardens in a way that is familiarly equatorial (in its semiotics).
The Barragan house is among the most revolutionary and beautiful man-made spaces in the world, and has inspired much interesting post-Modern interpretive dialogue.
Posted by Curtis Faville at 5:08 PM

I once interviewed architects in Seattle as to why they didn't build more surrealist buildings. They said they had to build according to code. The only room for innovation was doors and windows.

I didn't know of this architect. His work seems inspired by De Chirico?

FL Wright supposedly designed his LA houses to be affordable, progressive, environmentally copacetic as well as aesthetically pleasing, with a hint of the exotic, perhaps (as with the mayan-brick house in west LA). Not sure what they sold for when FLW had them built, but now worth 4 or 5 million shekels. That seems to be the case for a lot of "arty" architecture, LA or SF (Gehry's bizarre homes in LA also worth millions).

Wright's career was long and complicated. He seldom designed a house that was really cheap to build or to maintain, though he was very site sensitive, in his own way, and often ingenious. Not all his clients were happy with what he gave them. And there were often structural mistakes and failures that either extended construction times, or caused problems later.

Wright's audacious projects, such as Fallingwater, were very influential on many architects. Perhaps something like the Johnson Glass Company building might be cited as an influence on Barragan. I was being fairly general in my recitation of influences from Modernist icons.