Boss It's the Plane! The Plane! (William Garnett the aerial magician)

William Garnett [1916-2006] was that most unusual modern hybrid, the aerial art image photographer. Aerial photography has a long distinguished history as a form of documentation--geographical, military, agricultural, mapping, astronomical--but seldom did people imagine that images of the planet, seen from a considerable height--mostly possible only from airplanes--could be artistic. Flying home from service in the military, Garnett sat in the cock-pit with the pilot, and was amazed at what he was seeing, and decided right then and there to explore the possibilities of aerial image-making. The rest, as they say, is history.
Almost alone in a very uncrowded field, beginning in the 1950's, Garnett began to build up a portfolio of mostly black and white images, taken by him on solo flights in his shiny silver Cessna. He moved to Napa in 1958--ironic from my perspective, since that was where I grew up (from 1954 to 1968, when I removed to Berkeley to attend UC as an undergraduate)--earning money as a police photographer, of all things, in addition to other commercial work, eventually joining the College of Environmental Design in Berkeley in 1968. 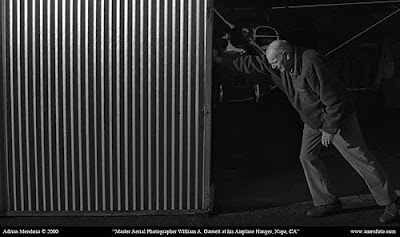 I think I first saw Garnett's work at the Vision Gallery in San Francisco in the late 1980's. In any case, I was so impressed by it at that point, that I invested in one of his original dunes prints (the 7th image going down in sequence here). Garnett, almost alone in his field, had long been recognized, though the general public wasn't aware of his work until the 1990's, when the UC Press published the book pictured below (William Garnett Aerial Photographs, Berkeley: [University of California Press, 1994]). Earlier, he'd published a collection of color images, The Extraordinary Landscape [Boston: Little, Brown, 1982], but those images were poorly reproduced, and the color reproduction technology employed gave little sense of the astounding precision and vision of his black and white work. Nathaniel Owings of SOM introduced his work in a book The American Aesthetic [New York: Harper & Row, 1969], but this seemed more like an idea book than a book focused on the images themselves. Wider appreciation had to await the UC Press book, published in Garnett's 78th year! Here, for the first time, a cross-section of his images showed how revolutionary and impressive his oeuvre had become.
Images of earth's surface provide a varied visual palette of textures, many highly abstract and formally weird. How astounded I was to learn that he'd made most of these images with 35 millimeter, or medium format cameras! Typically, Garnett would print these images at very large scale, 24x36 or larger. The incredible detail he was able to capture suggested enormous lenses, or high resolution flat plane lens acuity. But apparently not. 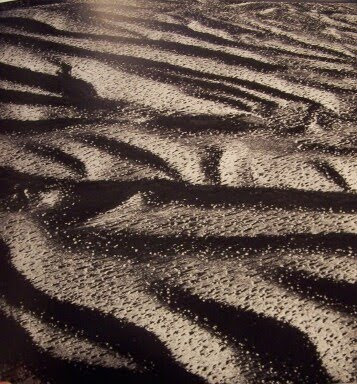 According to Garnett's account, he would discover a subject that appealed to him, set the plane on a circular path, lock the controls, and then lean out through the cockpit window with his camera, on the plane's tilt! For those of us who bitch about the inconveniences and hazards of large format photography, this strenuous and improbable technique is a cautionary reminder. 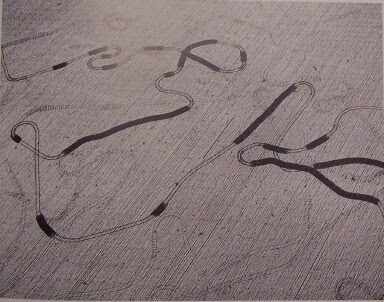 Often, on transcontinental jet flights, I've marveled at the extraordinary land forms of the American southwest--the stark plains, jagged mesas, sandpapery scrub, folded and plaited dunes, etc. But Garnett's aerial work typically was done at far lower altitudes than jet passenger vehicles fly. Ansel Adams constructed a special "camera car" for himself, in which the top of the vehicle was equipped with a plywood platform, which enabled him  to photograph from a point high enough off the ground, to avoid fronting foliage and clutter. But the secret fantasy of many landscape photographers has always been the potential viewpoint somewhere between being stuck on the ground, and being trapped inside a moving airplane. Video work from helicopters and small single-man craft is just beginning to be explored these days. Who knows how much more sophisticated we'll become in the years ahead, at enabling low level access to landscape views? 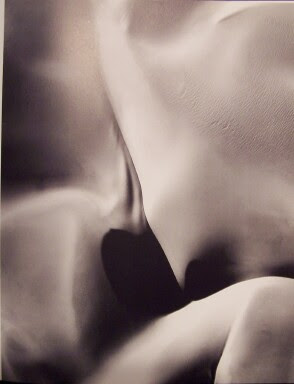 Garnett's studies frequently suggest a level of abstraction that bids fair for comparison with the most interesting of the Abstract Expressionists or post-Expressionist painters. Along with other land-based photographers like Brett Weston, his work suggests that imagined landscapes are no more interesting than the real world ("Reality is greater than our dreams"--Frederick Sommer). The problem here is that it's impossible to perceive the quality of detail in these images, unless one can view them at scale (in wall-sized prints). The images I've chosen here--mostly for their variety and range--can't be fully appreciated in these tiny photoshop versions. But it is possible to get a sense of their variation. 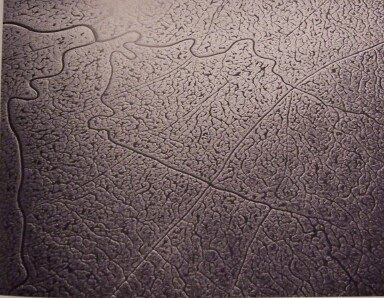 One peculiar effect is of scale. Occasionally, the images seem so unreal that it's hard imagine quite what one is looking at, or at what distance the image is seen. What's impressive is frequently the persistent regularity of lines, on the one hand, contrasted with the seductive irregularity of natural forms on the other. One thing I seem obsessively to do while driving long distances, is looking at precisely planted rows of trees or crops in agricultural landscapes, watching the coordinates line up, and re-align at strict intervals--the grid points shifting as one moves around or along the periphery. Something like this pleasure takes place in Garnett's images of planted fields. 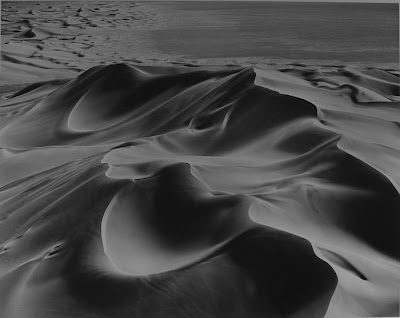 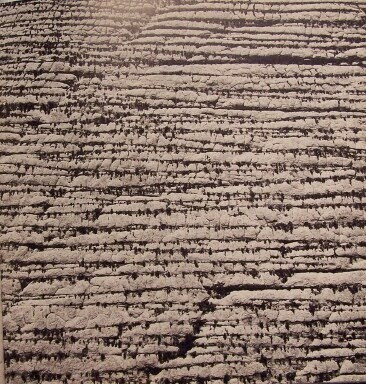 Frequently, the images suggest symbolic objects: Nudes, striated glass, floured dough, veins, tree or plant networks, liquid waves, cloth, etc. This suggestibility is precisely what Garnett is after, one imagines. The metaphorical suggestiveness of abstraction is one aspect of what drives our interest and curiosity in it. In painting, lyrical abstraction was considered a liberation from the symbolism of gratuitous pictorial reference(s), and photography joined the party beginning in the 1960's. Today, such kinds of distortion and "elegant gorp" (Brett Weston) are treated as fully entitled endeavors, from images blurred into unrecognizability, to lurid color reversals, collaged multiple exposures, and manipulations of all kinds--though tending away from the clear, vivid image focus which first drove photographic innovation in the 1930's and 1940's (i.e., the f64 Group).
Garnett may be seen as belonging squarely in the clear focus tradition, with the additional emphasis on earthscapes as abstract maps of structure, geologic forces, large scale sculptural alterations. And Garnett is not alone in this area: Think of Smithson's ambitious landscape excavations, Gohlke's aerial work at Mt. St. Helens, Gowin's studies of industrial and extraction sites, Burtynski's eerie surreal color studies of forms on the land. Garnett prefigures all these variant branches of man's larger awareness via our bird's-eye vantage, seeing not just visual inspiration but, ironically, a growing awareness of what our presence on the planet is actually doing. The first great psychological illumination to come from man's trip to the moon was the photographs of earth taken from far out in space. People were astonished at how self-contained, small, and fragile our small planet was! Aerial photography provides us with glimpses of truth, furnishing cautionary images of how complacent man has been in his exploitation and appropriation of the environment. 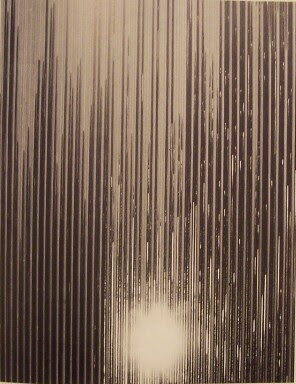 Man's footprint is large, and destructive, but his evident power over nature also may give us hope. Rather than being merely slaves or victims of accident and rapid change, we have the ability to augment and redeem. Nearly all of nature now is subject to man's whims, to his willful desires and ambitions. Animals are becoming extinct; raw materials are being used up; the soil, the water and the air are all being consumed and expended for our convenience.

How long can this rapid expansion into the environment, the wholesale chewing up and spitting out of our material inheritance, go on without devastating consequences? 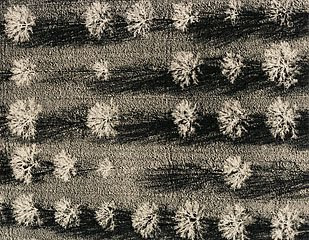 Thanks to artists like Garnett, we are able to see both the beauty of our landscape--and in a new way--and perceive how delicate and vulnerable it is. Land--landscape--doesn't exist merely to be used, as if it existed only as some kind of limitless "resource" for human manipulation; it existed long before we arrived, and doubtless will continue long after we've become extinct.
The photographs taken by the Mars Rover Mission vehicle, of limitless expanses of orange-red sand, lifeless, without movement, without agency, without purpose, are a grim confirmation that we're only one remote outpost of animated consciousness in the universe. It's unlikely that humankind will ever be less lonely than we are now.
Posted by Curtis Faville at 7:46 AM

Ever see that 10 or 12 part Planet Earth series on TV )or DVD)? Each episode ends (on teh DVDs at least) with a "Diaries" entry, concerning how a certain part of the episode was filmed. At least two have been fascinating looks at aeriel videography.

One involved the use of stationary cameras, initially developed for the military, permitting focused shots at great distances.

More interesting was the one about the contraption -- basically two lawn chairs fitted to a small hot-air balloon that allowed teh videographer to film at or just above treetop level. Taht made from stunning views of the baobab trees of Madagascar.

Anyway, back to aerial still photography. What say thee re: the "pop" king of aerial photo / coffee book sales, the late Robert Cameron?

the skeptic in me wonders if even aerial photography (like most types of photography since the 60s), with its purported "clear focus",hasn't been culturally (as well as aesthetically)coded, leading to the suspicion that photographs taken even high in the air also map out spheres of control and dominance over the earthscapes below(almost in the way the landscape paintings of Turner and Barrow in the eighteenth century both aestheticize and legitimize the prevailing land-based socio-political economies in England)

Both language and aerial images are representational with maybe language tipping more heavily in that direction. You describe Garnett's work at times as if we were viewing 'surrealist' or 'symbolic' works, revealing conflicting impulses and authorial intentions.Referring (as you do) to landscape points and coordinates seems to place the discussion of Garnett's spectacular visual portraits on a kind of grid, judging the world as if it were a place of competing (or serviceable) uses. In short, do we marvel at the beauty or the waste? Are sierras, mesas and dunes meant to be seen as blemishes or natural adornments.

It's hard for the postmodernist in me to separate the 'ideological' from the artistic in this way.

I'm certain that Garnett began fairly innocently, just wanting--as he is often quoted as saying--"to share this amazing beauty" he was seeing from his cockpit, with others.

Abstract Expressionism didn't gather steam until the late 1950's, and in the public consciousness, perhaps even a bit later. I think Garnett began to think of his abstract images in terms of their complex aesthetic potentials and references perhaps in the 1960's, and this then became a part of his program. I doubt whether he was of a philosophical or critical turn of mind (I also think this about Brett Weston, who always avoided talking seriously about the implications of his work). Like many "unconscious" artists (Harry Callahan comes immediately to mind) he just let his intuition guide his progress.

Artists who begin in innocent awe, then progress to complexity and visionary insight, often afford us the clearest examples of sensible careers. Garnett strikes me as one of these.

What we may have to say about the significance of his images probably goes well beyond the initial impetus of their inception(s). Which is fine. Criticism needn't be bound by the artist's first impulse. The artist can't take complete responsibility for the implications of his work, especially since it will--with any luck--outlive him.

I assume that posterity will regard everything we've done differently than we suspect. This almost always is what happens. Will a photographer like Garnett--with his special focus and subject-matter--eventually come to seem more important than Adams and Weston and Strand? I wouldn't bet against it.