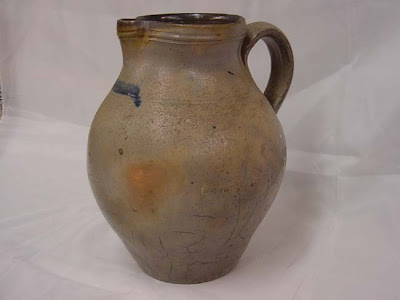 Anecdote of the Jar
I placed a jar in Tennessee,
And round it was, upon a hill.
It made the slovenly wilderness
Surround that hill.
The wilderness rose up to it,
And sprawled around, no longer wild.
The jar was round upon the ground
And tall and of a port in air.
It took dominion every where.
The jar was gray and bare.
It did not give of bird or bush,
Like nothing else in Tennessee.
This poem by Wallace Stevens has always intrigued me. It's one of his most popular, most quoted, and most discussed poems as well. It's in dozens of high school and college literature anthologies, because of its apparent simplicity, its efficient brevity of assertion.  To begin with, it isn't merely the record of a thing simply found, but an object which the speaker, the poet, has placed into an environment. Every landscape in the history of poetry is--at least to some degree--the classical landscape of the garden, not just any garden, but a man-made garden, and even the original Garden of Eden.
What is so intriguing about this very simple, and seemingly unambitious poem?
Well, to begin with, Stevens was a New Englander, who very much enjoyed visiting Florida. Stevens's poetry is filled with a lushness, an ornateness of phrase and image which is like the imaginative plumage of some exotic species of epicurean dandy. Much of his meditative verse is occupied with the opposition between intellectual refinement and sensual indulgence. Nature is a beautiful, but untamed, context, within which the mind--assaulted by sensation, virtually drunk on sights, smells, touches, colors, sounds, sensory perturbations of various kinds--twists and stretches, moans and hums with pleasure, delight, revulsion, in a sort of grand inebriation.
But Stevens was a businessman, an executive in a large insurance company, and he had a duty and a role to play in the world. He was no bohemian in his outward existence, so his poetry--and his thinking about art--got compartmentalized into the larger respectable identity he created for himself and his family. Rather like Charles Ives--another cultured New Englander--Stevens harbored a dazzling creative imagination behind his dour upper-middle class exterior. That "slovenly wilderness" is classic Stevens. Who would call the wilderness "slovenly" except a lapsed moralist, who saw in Nature (with a capital N) the wild, untamed, dangerous, seductive sensuality of sin! Or, at least, in aesthetic terms, a place of disorganization, chaos, disorder, confusion, unformed or undisciplined by the hand of man or god. (Science, of course, reveals to us more and more, as time goes by, the inherent, implacable and ruthless efficient order of nature, rather than its randomness, its accidental dissimilarities and inequities. And Stevens is very much concerned with weighing and testing these dichotomies.)
The poem sets up the classical Metaphysical dichotomy between Nature and Man-made Form, and asks us to imagine what the effect the existence of a man-made object might imply within the context of a "wild" landscape. The jar "civilizes" the nature in which it rests. Simply by existing, by maintaining its structural integrity, the jar influences the rest of the universe. The existence of a single created, molded, formed object (which didn't exist before it was made) affects the totality of structure, the philosophical vacuum of the universe--the "natural" non-human set of laws and material of which the "universe" is composed. So the poem is a philosophical proposition in which the introduction of a plain, aesthetically neutral object--"gray and bare"--whose roundness, plain formality of shape, which derives from nothing "in" nature--"giving nothing of bird or bush"--establishes an aesthetic-ethical superiority--a "dominion" taken from nature, separate from it, superior to it, and resistant to incorporation, inclusion, decay, and wildness. Not the physical jar--which, in due course, will crumble and disappear as form--but the idea, the blueprint of its form, the hand of the maker, the mind of the creator.
This notion of an aesthetic purity, an inviolable ideal formality was very much on my mind in my early days as a writer. An early poem of mine from the 1970's, here, sets out an idealized formality which I quite liked at the time:

Descartes
The tulips are sublime mechanisms
Pink and yellow wafers on hinges--
Nothing that can be thought
Matches the simplicity of their essences
Which reproduce themselves
With the subtlest variations
Upon an ideal conception
That does not exist
Except in
Bluprint.


Descartes is considered the "Father of Geometry" (a subject in which I excelled, at least until things got too complex in first year Calculus), and famously coined the phrase "I think; therefore I am." The "Cartesian" notion of an idealized universal structural paradigm has had untold influence on the course of philosophical thinking over the three and a half centuries since Descartes' time, and is still attractive. The implication of his line of thinking, that self-consciousness--accurately described and reflexively confirming--can comprehend the universe, is in large part responsible for freeing human thought from much superstition, and liberating scientific inquiry from confining religious doctrine(s).
This kind of rationalism is very tempting, but it has been brought into serious question by post-Einsteinian physics and cosmology.
So my attempt in the poem was to caricature Cartesian rationality whilst making a beautiful object, whose fragility and uncertain fixity were merely passing indulgences. "Blueprint" was both the colorful "beautiful" object and the metaphor for the rational "plan" from which all living things (or all corporeal existence) derive. A-"religious", but not denying the possibility of an intelligent design, i.e., the poet's!
Posted by Curtis Faville at 8:00 AM

besides being the originator of "analytical geometry" Descartes (or rather Cartesian "dualism"), because of his inability to keep rationality and world separate (even in thought), is also the sole "father" of a view of Nature that's done the most to tear it loose from Culture (what you envisage as the place of "Man-made Form"), blamed by a lot eco-thinkers for the pillage-and-rape rationality of Western industrial civilization.

Descartes, as you've aptly illustrated through the "sublime mechanisms" image, was afraid of the chaos in nature and substituted for a true darwinian "nature of things" a "simple machine metaphor" (to quote eco-philosopher Donald Worster)to tame the world along purely mathematical terms.

I think Stevens's devotion to a "lush aesthetics" may have saved him from the same Cartesian accusation. And I agree the great poet (being no slouch) did "weigh and test" his distinctions very carefully,so that he was able to give integrity to the jar as both 'structure' (artifact) and effective Attic symbol. The 'blue guitar' is another fine example. I also see here clearly the influence of Keats's "Ode on a Grecian Urn".

Both a good reading, and good poem, from you today, Curtis, for which thanks. If I had to pick my favourite English poets, Stevens would be in the top five.

You wrote "gray and bear," when the second adjective should be "bare," and then later on you misspelled "Einsteinian."

I do that all the time in my posts, but this indicates you must have dashed this one.

Why is the poem set in Tennessee?

Is that the absolute wilderness, and the notion that even it can be tamed by New England's Puritanical rationalism? Has anyone ever tracked down the original jar?

Was the poem based on an autobiographical experience, or not?

He must have spoken about this in an interview some place.

I like to hold out for the odd duck arguments.

I am not sure that global warming exists (it's been 20 all week, and this is likely to last another whole week at least).

I haven't been around for a billion years, so I don't know what's happening really in terms of evolutionary change.

Cartesian rationality may have limits, yet Descartes did preserve the human subject--and Reason. Anglo empiricists (and later, Darwinists) on the other hand viewed a person as more or less a bundle of sensations which may or may not related to a real world, piled on top of hamburger. Descartes also invented analyical geometry (ie the coordinate system), and was near to establishing calculus. Locke and Hume, especially, are not without insights, but sophisticated nurses for the most part. Tho' Hume was a bit of a belle-lettrist, I have read.....

Charles Ives' musick I get at times: a complex wit, at times dark, or metaphysical perhaps. Stevens I usually don't get--don't mean a thang if it ain't got dat swing....do do da da...etc.

Thanks, Kirby, corrections made!

There's no question that the universe has an intelligent design--the only problem is positing a creator (or designer). Why does there need to be a creator?--the universe, in all its wonder and complexity, just IS, has ALWAYS BEEN, and will ALWAYS BE.

The human mind can't conceive of infinity--either of spatial dimension or of extent (time). That doesn't mean that there's a "higher power"--it just means that things are more complex than our minds are capable of comprehending. This bothers a lot of people; they get worried that there aren't easily understood answers and explanations. But it doesn't matter whether they're confident, or comfortable, or not. The universe doesn't care if you understand it, and neither should we. Caring is just a conceit of consciousness.

Stevens's poem strikes one as a case, a philosophical proposition, rather than the description of an event. I doubt very much whether or not Stevens is talking about seeing an actual pot in a field, or in a forest.

The pot is symbolic, it stands for a principle. It's an example of something. It's a universal "pot" (in the Platonic sense), not a specific pot. There's nothing unique about it. Its only use (purpose) in the poem is as a man-made object. It could have been--instead of a Greek amphora--a plastic bleach bottle, or a Coke bottle. But that would have distracted from its generic quality. It's nothing special, as an objet d'art. It lacks associations.

Stevens' juicy jungle stuff--the Idea of Order at Key West and Slumdaymornin', even-- sorta entertains me, at times. He probably read some PB Shelley (including the vatic, real stuff like Alastor) at times. And I would agree he's a bit of a ........non-believer...like PBS.

Tho' other WS writings seem sort of bor-reeng and indulgent...

especially the (as I call it) The Mud-Luscious,

all go wayyyyyyyyyyy back
into "our" past and into

just "check out" and "into"

however
2010 is my year to re-disconnect from all the blogging...