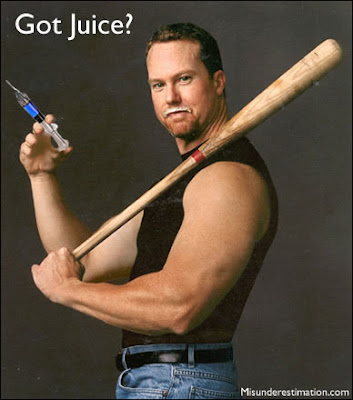 Mark McGwire's "confession" yesterday on television--widely reported this morning in the media--that he did indeed take "performance-enhancing" steroid drugs during his stellar pro baseball career didn't surprise anyone. The only possible surprise was that the St. Louis Cardinals, with whom he'd just signed a new contract as a team batting coach, presumably demanded that he perform this duty as a condition of being hired. Did they think it made them seem more ethically clean? That would hardly wash, since McGwire was a big-time steroids user on their watch, from 1997 through 2001.
In his statement, McGwire claims that he began using steroids in the 1989-90 season, at "someone's" suggestion, to facilitate healing from his various injuries. That's a bold-faced lie. McGwire played six full seasons (1987-1992) without significant injuries. It was only in 1993, after several years of drug use, that his injuries began to pile up. He wasn't driven to use drugs by injuries, the drugs caused his injuries!
Then, from 1996 through 1999, he resumed full-time play, and it was then, pumped up to unbelievable proportions by the drugs, that he built up those power numbers which are the basis of his reputation as a star player.
McGwire was never a total hitter: His numbers show that he had a good eye, but he seldom hit for impressive average, or produced runs or RBI's at an impressive pace. He was big, and slow. His home runs typically were huge "pop-ups" since he seldom hit the ball squarely. His steep upper-cut swing was designed to produce those flies, and as such, an increase in his upper body strength (facilitated by the drugs) could add those extra 15-25 feet of distance that would clear most major league park fences. Many of his homers were "cheapies" landing just beyond the edge of the fence(s).
This "admission" begins to look more and more like a self-serving strategy on the part of major league baseball generally. It can claim to have "cleaned up" the sport by getting McGwire, one of a handful of high profile players of whom drug use was strongly suspected, to confess publicly. But this admission is an anti-climax. Everyone knew McGwire took steroids, just as we all know Barry Bonds did.
The difference is that Bonds was forced to take the fall for his use, because the Federal prosecutors felt Bonds would be a good sacrificial victim. Bonds was cheeky, an "uppity" Black athlete, cocky and manipulative. If they could "get" Bonds, major league baseball could hold him up as the convicted poster boy, while the other users, like McGwire, could have their cases quietly laid to rest.
McGwire was always reputedly something of a primadonna, just as Bonds has always been. But his "image" as Mr. Redheaded Nice Guy, embracing his son at home plate when he broke Ruth's record, shouldn't have fooled anyone. It's a clear instance of the discrimination which still plagues professional sports.
If Bonds is denied the Hall, or his stats sprout asterisks, then McGwire should share the shame.
This "confession" is sheer bullshit.
Posted by Curtis Faville at 8:34 AM

His home runs typically were huge "pop-ups" since he seldom hit the ball squarely.

That's fairly accurate. Canseco probably had a larger helping of 'Roids than Mac.
For pro. athletes, 'Roids are generally the norm (and for most muscle boys. Many hicks deal with an inferiority complex with 'Roids and pumping iron).

A few years after they retire, they can generate some extra revenue by the "say it ain't so" stories.

You want some power drives, check out some of Manny R's homers---in playoffs 2008 he hit a few record drives (a few just off foul)--like 450 + still rising. Chingada. I don't really like Mannywood, but that boy hits the f-ing ball.

sure is/are steller... I am switching over to wrestling and football and basketball .. at least those pro athletes are
upstanding role models for our brain-dead populace!