BAG BALM - Another Product Endorsement from the Crypt 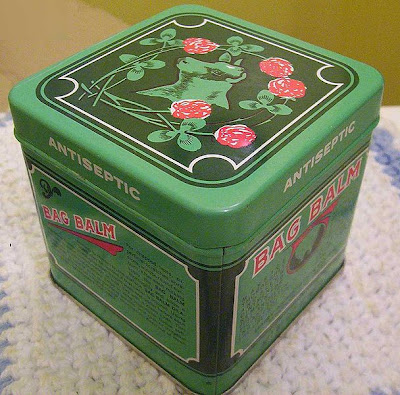 This unencrypted blog message is to recommend a product that has been on the market--essentially unchanged--for over a century in America. I don't think the Chinese have bought it yet.
The familiar green can was unknown to me until about 5 years ago, when my wife brought the tin home, and told me it could be used for a multitude of purposes.
I've never lived or worked on a farm, never had the opportunity to experience milking cows, though my stepfather, Harry Faville, grew up on a farm in Wisconsin, and told me all about it. Given the death of the family farm in America, and the rise of "scientific agriculture" there are far fewer people than there used to be, in America, who milk cows by hand. Still, that wouldn't suggest that cows' udders are any less likely to develop sores or cankers or abrasions. Bag Balm@ was originally invented as a salve for udder tissue, but farmers are famously inventive and handy, and other uses, both animal and human, were eventually discovered for this high Gothic American down home product. When Bag Balm@ was introduced, people still used horses to pull wagons, got their dry goods in general stores, and products like this would have been stocked, among other places, on the shelves of livery stables.
Today, over a hundred years later, it's being used by people for much the same purpose. Ever since I was a child, Chapstick@ product dispensers have cheated customers of the last half inch of waxy balm from their screw-up-top cylinders. I tried using the stuff on my lips, and decided that I'd never have to buy another Chapstick@ as long as I lived. In addition, it works wonders for those little razor cuts that tend to bleed freely on the underside of my chin or neck. No problem with Bag Balm@: just put a touch on it and the wound coagulates immediately. That first can my wife brought home 6-7 years ago, is only half used and I expect it to last longer than I will, unless I buy a milking cow.
When I was a boy, we guys who played baseball would use a product called Glovolium@ to lubricate the pockets of our gloves. When you rubbed it in into the leather, it made it malleable, and kept it fresh. Hell, I bet you could use Bag Balm@ for the same purpose, though I haven't tried it yet.
Probably isn't suited for sexual enhancement, but I'd wager it would do just fine for certain irritations in unmentionable places. I haven't looked into the chemistry--the FDA only certifies Bag Balm@ for use on animals--but it wouldn't surprise me if the formula wasn't much different than Preparation H@!
Anyway, Bag Balm@. Give it a try if you haven't yet. A little bit of Americana surviving into the 21st Century.
Posted by Curtis Faville at 3:41 PM

get it in China Town, NYC

put a dab on your fore-head
and breath right!

cloaest stuff we got in Amerika is Vick's Vapo Rub

which is dumbed-down crap!

something about kids putting it in their noses
and " getting addicted"!

here is the (last) Tiger Balm that I have used:

I came upon it via my original muse

who lived just out-side of China Town in NYC

when i had my stroke the needles in my foot saved my ass!

THanks for the advice, Ed.

Never heard of this stuff, but I'd say it sounds Chinese. Yet another product from Beijing!

It's amazing how everything comes from that place.

Probably has lead in it.

I'd try some but I'd be willing to bet that there's no such thing in the whole county (size of Rhode Island).

but similar salves go wayyyyyyy back into ancient
Asain/Chinese times..

however due to our every-present government dumbing things down..

the amount of Camphor in the mis has been lowered to under 5 %!

Why? 'acuse wedon't want our "kiddies"

"getting hooked on Vicks"

they recently tried to ban the stuff and people over 50 rushed to buy it up.

instead of banning it

they (the gov't) forced a lowereing of the % camphor in the product..

now, it is not so effective.

and, do check out the
food stalls and litrtle eateries...

China/Chinese is an OLD OLD CULTURE!

the present "stuff" is just a passing fantasy in the total scheme of things!

my friend (and muse) can trace in the writing-down of the records back her ancestors/family
TWENTY-ONE generations!

these revolutions making a mess out of everybodhi's best of

now to set a shovel into the 23 inches of snow here...put another log in the stove and watch the snow melt and the fire cook my left-over tofu and mixed veggies1 maybe by May!

dab a bit of Tiger Balm up my nose!


(look up camphor and

do drop all them (seemingly) biased/angry attitudes.... not good for The Heart!

Tiger balm was originally from India, ah believe--Hindoo magick. Then spread around the east mysterious.

It's probably listed as one of the Devil's devices in the Big Book of Fundamentalist Propriety. Best to smear some extra-hot on the toilet seats at like some evangelical church-warehouse, or Bible college, and then watch the church ladies and men squirm. Heavens to Betsy