A Matter of Taste - How We Sense Flavor

Like most people, I think I took the phenomenon of taste for granted for most of the first half of my life. As a child, growing up in a household comprised of two Midwestern parents who'd never been very adventurous in their eating habits, I tended to regard spicy or unusual flavors with suspicion, and even revulsion. There were certain foods--and food flavors--which I found intolerable! My stepfather, who had traveled around the world while working as a deck-hand in the merchant shipping business during the 1920's, had developed a strong distaste for highly spiced foods, especially garlic and peppers. My mother had grown up in a poor household during the Depression, and, like many of her generation, welcomed the convenience food revolution of the 1950's, preferring canned and frozen food alternatives to fresh. For my part, I had a severely restricted range of acceptable flavors, and was usually unable to consume certain foods or flavors. I can recall distinctly being unable to eat dairy cream, spinach, asparagus, brussel sprouts, mushrooms, fruitcake, peppers, avocado, liver, fish, creamed corn, beets, artichokes, and several other things which I can't recall at the moment.
I remember distinctly being unable to eat Campbell's Cream of Mushroom Soup, and being punished by being made to sit in front of the bowl at the table for hours after meal-time, forbidden to play, until I "ate my lunch." Both the flavor and the texture of mushrooms literally made me spontaneously retch (a horrible sensation). My parents somehow thought my resistance was deliberate, and irrational, and that by "forcing" me to eat the offending food, I would "get over" my revulsion. My reaction to certain flavors and textures in foods was thought to be a kind of immaturity, or childish unreasonableness, in refusing to "try new things" or to "act more grown up" about eating. Like most kids, I loved sweets, and wanted my foods to be bland and predictably consistent in texture or sensation. I liked hamburger and mashed potato, ice cream and cookies, chocolate milk and sliced apples, chicken legs and watermelon. My parents would be shocked, I imagine, to learn how broad and cosmopolitan my tastes have become as an adult--surprised, and perhaps even vindicated in their campaign to enhance my childhood appetite.
But it turns out that my behavior in childhood was completely normal. Research into the behavior of tasting has shown that children generally have much more sensitive--though much less sophisticated--taste than adults generally do. As people age, their taste sensitivity changes, growing less keen. Also, those who smoke or consume alcohol in large amounts, or have other environmental or vocational exposures or stresses, may also lose taste sensitivity. Both of my parents, for instance, smoked heavily, so it's quite likely that when they ate cream of mushroom soup, it didn't have nearly as intense a flavor as it did to my immature taste buds. They were literally experiencing something different than I was, or at least experiencing it differently. Or were they?
Most people are familiar with the general knowledge that human taste is composed simply of four simple flavor sensations: Sweet, sour, salty and bitter. Certain other secondary sensations have been associated with piquancy and savoriness, but these may simply be another sensation such as heat or slipperiness, i.e., not true "flavors." Thinking about these childhood memories got me wondering: How the devil does taste work, and how do people feel so many contradictory and complex sensations about food? Food is cultural, taste is a physiological process describable in purely scientific terms, but where do these separate spheres of apprehension and empirical data intersect? 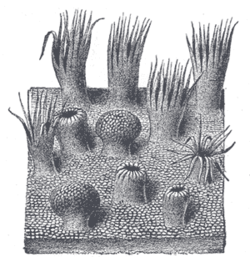 It turns out that we perceive the sensation of taste through the interaction of certain chemicals which are present in what we eat, with taste receptors on our tongue--the "taste buds." At the molecular level, what this means is that the chemical structure of taste-producing substances actually comes into structural interaction with the "fungiform papillae" of the buds, producing the "sensation" of a certain flavor which is then transmitted to the brain through the nerve tree--incredibly, then taste is actually a physical process like two sets of Tinker Toy structures mating! But taste isn't simply the physical inter-reaction perceived by the tongue. Taste involves the olfactory sense (smell) as well. Attempts to categorize the range of smells apparently hasn't yet been conclusively accomplished--I read somewhere that there are "eight distinctly different" types of odor, any combination of which might produce a myriad of variations of smell(s). When we eat something, we are also simultaneously smelling it, so taste is a combination of both tasting and smelling, working together to produce a complex array of effects.
How do we describe flavors? Some people seem much more sensitive to taste and smell, and still others seem to possess a highly sophisticated aptitude in perceiving and describing such sensations. There are, in fact, so-called "super taster" people, whose sensitivity to taste and/or smell is many times finer and more intense than normal. Human animals, as a matter of fact, are fairly low on the scale of smell sense compared to some other creatures.
The ability to describe smells with a fine sense of distinction has always intrigued me. My wife, for instance, has a much greater ability to describe the flavors of a given substance, than I do. I don't mean she tastes more different things, just that the separate flavors seem to summon up their descriptive signifiers more readily in her brain than in mine, or that she is able to sort them into hierarchies more easily than I can. Is this something one is born with, or is it a learned ability?  Probably both.
As a single malt scotch, and wine and beer, connoisseur, I am frequently reading taste descriptions. I often find these quite ingenious, and usually accurate, though how I react to a certain described flavor often differs from the sentiment of another taster. Single malt scotch taste descriptives may include such unlikely components as "leathery," "charcoal," "smashed bugs," "woody," "soapy," "phenolic," "fresh mown hay," "slaty," "briny," "buttery," "peppery," "floral," and so forth. Put all the fruit and vegetable flavors into this mix and shake it vigorously. What exactly do I taste when I sip a little Kistler Chardonnay, or some 16 year Lagavulin, or some Orval Trappist Ale? A description for a complex single malt may say something like "nice forward warmth, strong caramel, burnt almond with orange zest, and a lingering Crackerjax evanescence." These descriptions sometimes seem like little poems, tiny epiphanic moments--which seems perfectly appropriate. Tasting for pleasure, or curiosity, after all, is one of life's great delights, and deserves to be appreciated just as any other physical or mental sensation which brings enjoyment.
I just wish I were more adept at identifying and describing the flavors I sense in food and drink. Some people can take one bite of something and immediately describe the four or five spice components which are present. Me? I'm lucky if I can name more than one!
Posted by Curtis Faville at 10:11 AM

At the molecular level, what this means is that the chemical structure of taste-producing substances actually comes into structural interaction with the "fungiform papillae" of the buds, producing the "sensation" of a certain flavor which is then transmitted to the brain through the nerve tree--incredibly, then taste is actually a physical process like two sets of Tinker Toy structures mating!

In other words, the innate bio-chemical parameters of taste are givens, and thus govern our perceptions in a sense. Alter those parameters--the papillae structure--slightly and sour could be sweet--that is, in English. A few shots of novacaine, or cocaine, and we have little or no taste sensation....

Defining, or translating taste can be an issue as well: we could probably get by translating say, sugary, to de-azucar in spanish. With more subtle flavors there could be problems. Telling someone "it tastes like aged porto" would only make sense to....porto drinkers, probably not to a teetotaler, or someone in western china....Or, to take another example, telling a blind person "the cliffs are vermillion" would be meaningless...

Sort of obvious, but shows that with many adjectivals, we need criteria which derive from sensation itself (,ie something like Locke's secondary qualities, which he felt were essentially undefinable...though secretly substituting vinegar for merlot, we could probably get similar reactions from people...yuck! )....

can't find those Swanson tv dinners in the aluminum trays anywhere! (they now come in some other kind of (poison) tray...

the chicken and the mystery-meat (meat-loaf, Salisbury steak) were the first ones.. we got a little freezer in the store in order to sell these new products about 1950...

the first food put in a can (the seams soldered shut using lead-solder? PEACHES! next came Pork and Beans! then SPAM

anyway main reason we got so many diseases... those aluminum trays... we used to save them and make our own "tv dinners"

think I's open a can of Fruit Cocktail and look over things..

so so much SALT and grease in evrything... who still can taste anything?

It always amazes me that some people (e.g. your wife) can "describe" flavors which others of us cannot. We can "taste" them but can't find the right descriptor to convey our experience.

But then there's "leathery." And "dirty sock." Not words I would ever use to describe a wine I liked!