The Prince of Monaco Was Sick of English Ladies

The title of this blog post comprises the first two lines of a longish poem I want to appreciate here. A poem of 28 stanzas in five sections. A poem in a manner now considered out of fashion. A poem about royalty, which begins in flagrant insolence, but proceeds to submerge, like a bathyscaphe descending slowly into uncharted depths.
The poem appears in Simpson's Pulitzer Prize winning collection At the End of the Open Road [Wesleyan University Press, 1963], and is in some respects rather unlike the other poems in that book, though typical of his earlier style.
Simpson was interested in the tectonic migration of cultural feeling from East to West, from Europe to America, and beyond--as well as what that movement might suggest to us in our unfolding present. The title of the poem--Moving the Walls--does indeed suggest a transportation. It is full of exotic and diverting detail, as if the accretion of cultural privilege could be expressed as a kind of taxonomic accumulation of objects, vouchsafed from history.
Moving the Walls
The Prince of Monaco
Was sick of English ladies.
The Prince had a yacht
And her name was Hirondelle.
She was cousin to the yacht of the Kaiser
And niece to the yacht of the Tsar.
And the Prince was interested in the sea--
That is, oceanography.
So he furnished the yacht with instruments
And with instruments of brass,
Burners and sinks and instruments
Of the most delicate glass.
There was also a whaleboat
And a whole crew of harpooners.
There was a helmet and suit of armor
For the wars of the ocean floor.
The Hirondelle trembled like a fern,
And the crew stood at attention,
And they piped the Captain aboard.
2
Cloud-sailed, the Hirondelle
Pursued the horizon.
At night she skimmed
The phosphorescent surges.
And now they are on the Pacific,
The bottomless sea.
And out of the deep they have drawn
The whale. Leviathan, with a hook.
They have captured the giant squid
That has ten arms, claws like a cat's, a beak like a parrot's,
And a large malevolent eye.
They stepped from the whaleboat into shoals,
The crests of sunken mountains.
In nets they gathered
Plankton and weeds and crabs that looked astonished.
And there were nights, O Prince,
When you stretched your hands and feet
In the leaves of the pomegranate tree!
And all went into the log.
The various sea trophies.
Were written down in the log.
The darkening sky, the storm,
And tranquil days--
All, all went into the log.
3
The Prince returned, a hero of sorts.
He returned to his former life,
To the lights of the Grand Hotel,
And the Russian ladies with their eternal cigarettes.
Then he built a museum.
The wheel of the Hirondelle is there,
And also the laboratory, the strange heart of the ship
Uprooted, leaving red holes
In the deck that vanished in smoke.
Here are the trophies:
A walking stick made from the backbone of a shark;
Tortoiseshell combs, and fans of mother-of-pearl,
Corals that faded,
Losing the changing hues of sea and sky;
Sea shells under glass
That are as dull as buttons
Sewn on garments by girls who have faded.
The Philippine Island are a box
And the smile of a lady in a mantilla.
A walrus stuffed with straw
Faces the diving helmet.
They remember Verdun and Passchendaele,
The mud-clouded wars of the ocean floor.
So all that oceanography, after all,
Was only a pawnshop.
For they brought home the tooth of the whale
And said "Look!
It is only a doorstop, after all."
For Leviathan does not exist,
And the sea is no mystery.
For a shark is a walking stick.
And this we call the life of reason.
4
Idiots!
We too are all for reducing
The universe to human dimensions.
As if we could know what is human!
Just a few dippers of sea water
And a fair wind home . . .
Then surely we won't be destroyed.
A strange idea, if you consider
The dust of those settlements--
The parlors where no one lives;
The splinter that wounds the foot-sole
On its way to the double bed;
And Leviathan over all,
The cloud shaped like a weasel or a whale,
Leviathan rising above the roof tops.
5
When men wanted the golden fleece
It was not wool they wanted.
They were the trophies that they sailed toward.
They were the sea and the wind
That hurled them over
Into the sea. They were the fishes
That stripped their thin bones. And they rose
In the night in new constellations.
They left no wreckage.
Nothing is floating on the surface.
For they yielded themselves
To the currents that moved from within.
They are mightily changed
In the corollas, the branched sea-heaven.
And you, my country,
These days your walls are moving,
These nights we are branching among the stars.
I say, but my mind is doubtful.
Are there any at sea?
If so, they have not whispered lately.
____________________ 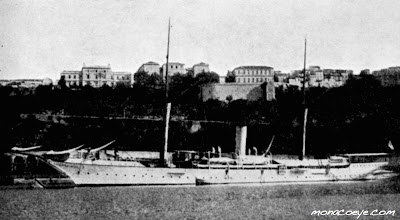 Hirondelle II was Albert's fourth and final explorer ship which he had built in 1911.
His fastest, largest ship, it was even equipped with wireless telegraph.
Whenever the Prince spent time in Monaco during WWI he stayed on board the yacht in the harbour!
After the war the ship stayed in Monaco harbour to his death in 1922.
A year later she sailed to England to be sold. She passed into American hands, spent many years berthed in New York, then Rhode Island.
She ended her days ingloriously as a pontoon in the Panama canal!

Prince Albert was something of a pioneer in deep-sea sonic measurements and also pulled up a great number of wierd animals from the depths.
Many a ghostly specimen can still be found preserved in yellowing formaldehyde-filled specimen jars in the Oceanographic Museum, which he founded in 1906.


Photo credit: By kind permission of NOAA Rice Library of the NOAA Centers for Coastal Ocean Science
Image ID: ship4641, NOAA Ship Collection
The HIRONDELLE II. Plate III, figure 13. In: "Results of the Scientific Campaigns of the Prince of Monaco." Vol. 84.
Here is a slightly more flattering portrait of the yacht-- 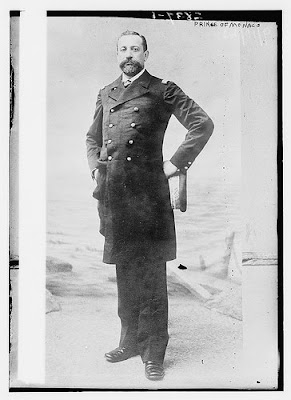 --looking every bit as pompous and foppish as Simpson's poem about him would suggest.
19th Century royalty was swept up in the excitement of Victorian science, and occasionally availed itself of the opportunities for exploration, research and discovery. It was a noble calling, like yacht racing, or building monuments to celebrate the holy lineage, or chasing English ladies. Albert, of course, was the grandfather of Prince Rainier--yes, that Prince Rainier, the one who wooed and married the American actress Grace Kelly, and made her his Princess! Princess Grace died at age 52 in a tragic automobile accident. In the years since, their children have led lives of mischievous indulgence, marrying and divorcing repeatedly, and having many children, the majority out of wedlock. The privileges of nobility continue into the 21st Century.
The poem employs a style which I would describe as dramatic prose. It's deliberately stagey, in a way which suggests broad comedy, or burlesque. It satirizes the arrogance and presumption of old-fashioned royalty, which is made to seem overly precious, affected, and supercilious. If this was science, it was a science of recreation, a pretext for displaying wealth, of glorifying one's freedom and means, of enhancing one's official vanity. It is precisely this sort of complacent extravagance which Simpson associates with the worst of the "old world's" tradition, its hypocritical and ponderous airs. Nevertheless, it forms a dramatic backdrop, a kind of tapestry of excess, in itself an entertainment. In the modern world, we view such folly--however well-meaning and pious--as slightly ridiculous. We've lost the sense of pomp and splendour--the emperor's new clothes--which no one takes seriously any more.
The catalog of objects in the 2nd and 3rd sections comprise the stale artifacts, the trophies of privilege. These were not specimens of a scientific expedition, like Darwin's voyage on the Beagle, but talismans of fashion.
"When men wanted the golden fleece/It was not wool they wanted." The sense of true adventure cannot be copied or faked. "They were the trophies that they sailed toward./They were the sea and the wind/That hurled them over/Into the sea. They were the fishes/That stripped their thin bones. And they rose/In the night in new constellations." Men dream of a life of heroic engagement, in which risk and enactment are unlimited by the cautions and anxieties of mere mortality. "They left no wreckage./Nothing is floating on the surface./For they yielded themselves/To the currents that moved from within." The dreams of ancient heroes were moved by their own currents, but they left no evidence of this ("wreckage"). We assigned men's names like deities to the heavens, but there are no material souvenirs of spiritual conquest from the age of mythical beings. They survive as "a murmur of serious life."
Yet, Simpson demurs, "you, my country,/These days your walls are moving,/These nights we are branching among the stars.//I say, but my mind is doubtful./Are there any at sea?/If so, they have not whispered lately." Do we still hear the sea in the conch? The call of far-off adventure, across oceans, continents, the very stars? Can we tell which is the genuine, which the fraud? Are we like impotent princes on a sea of excelsior? 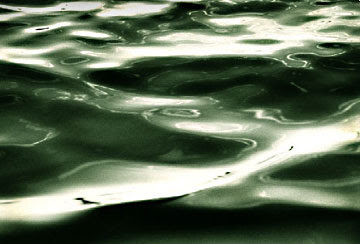 Posted by Curtis Faville at 4:08 PM

Curtis! This is very interesting.
I have long been interested in finding poems and or any art which is more or less out of fashion but which still elicits interest in various ways. You've done an

job here. I like silliman hillyer's Nemo poems, and love reading like say a biography of Paul Scarron.. anything. this was really interesting and I wish more people would

example
exegesis (whatever it is)
and research elements

sort of idea.
it makes a nice package.

I enjoy sections of it --the Leviathan imagery seems intriguing, as y'all say. Burlesque-like slightly, or circus-like.

First he alludes to Leviathan as in creature of the deep, giant squid...later he suggests Leviathan as in the State, like a Hobbesian sense perhaps--the corrupt, monarchistic state--thereby suggesting some revolutionary alternative?? Socialist, or .....nationalist.

Politicize when necessary being my motto.

They reminded me of Henry Jean-Marie Levet's poems. I translated those for Jacket about a decade ago. I wonder if he'd read those?

Like most 20th century vers libre
types, Simpson does patch together a decent collage, has the curio shoppe and clever connotations. The syntax is fairly ordinary, however, metrics---well, metrics are absent, really. Then, Ezra Pound or Williams or Rimzbaud, someone offed metrics, supposedly and converted anglo into....chinese (tho' at least EP had worked through the tradition, knew what he was rejecting, unlike a few dozen boxcars of poetic decorators, from the 20s to present....). Why not write in pictographs? Or just ...zen watercolors, with some hothip haikus.

(anglo's barely capable of like a saxon-germanic like resonance--requires a meister like say Frost, or maybe 5% of Yeats, Kelley-sheats. Even francais and italo-espanol don't really suit poesy so well; they are journalistic tongues, fast, will do for novels, or manifestos--not meant to be....etched, like latinate, greek, or, maybe a few belches of hoch deutsch into marble).

(that said appreciate your allowance of dissent, sir. S-man, or Kirby O, other sites don't allow even moderate contrarianism. Like with S-man post re poetesses. Merely say something like "what a pretty gapped-tooth okie gal poetess", and never appears. A small graphic of Perseus and the Medusa. maybe?? Das ist Verboten.....)