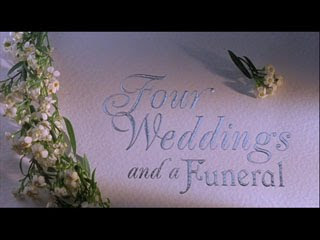 Four Weddings and a Funeral [United Kingdom, PolyGram, 1994] is that most unusual and rare type of film, a serious romantic comedy for grown-ups, that almost completely works, both on the level of casual humor, and on the level of effective drama.
Made in England ostensibly for an American audience, it nevertheless manages to be just English enough, perhaps, not to embarrass British audiences. The romantic relationship between British and American characters is an old trope, going all the way back to Henry James and Edith Wharton, so there is the very real risk of remaking predictable jokes, and turning the respective nationals into caricatures of their historic-literary models.
I'm not sure why Andie MacDowell was chosen to play the American ingenue, unless it was because she looked so horsey (with that signature gummy smile) audiences might associate her with the Wild West. In any case, she was chosen as a prospective foil to play against all that British reserve and tight-lipped propriety. Indeed, the narrative itself is constructed around the reluctance of the male lead Charles [Hugh Grant], to commit to the idea of marriage, which is the central underlying question in the movie: Is the institution of marriage still possible in our age of infidelity and uncertainty, of expedient liaisons and half-hearted sex? Oddly, perhaps, the writers decided to organize the story around a group of English characters (something that was tried, with much less success, with Grant again, in Notting Hill [1999]), with the typical ragtag bomber-crew of misfits. Charles rooms platonically with a kooky scamp named Scarlett ("like Scarlett in Gone With the Wind, but much less trouble!"), and is friends with Tom and his sister Fiona [Kristin Scott Thomas] (of a family rich beyond description), Gareth [Simon Callow] and his lover Matthew, and Charles's younger brother David (played by deaf actor and dancer David Bower).
Aside from being unable to get out of bed on time in the morning, Charles's biggest problem is that he's become a "serial monogamist" (which is how "Duck-face" one of his previous longer-term girlfriends Henrietta [Anna Chancellor] describes him at one point in the movie). Everyone else in the movie seems to romanticize marriage, and can't understand Charles's reluctance (expressed succinctly in his speech during the reception of Wedding #1--"I know I couldn't do it"). 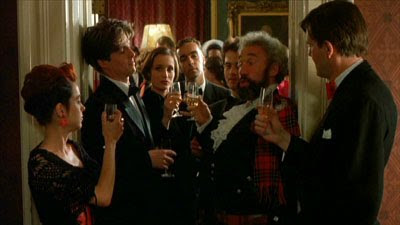 But we know that the whole point of the movie is that he will do it at some point. Someone, somehow, will be break through that resistance and seduce him into unconditional commitment, and conjugal bliss.
When that someone shows up on the scene, during this very same wedding party, Charles pursues her with the same mixture of guarded interest and slightly embarrassed lustfulness that has worked so well in his past affairs. But Carrie [Andie MacDowell] is every bit as fast and loose as he is, in addition to being a good deal more uninhibited (even amusedly boastful about her past conquests), than Charles is.
But before Charles's infatuation can yet grow into full-fledged love, Carrie decides (on a whim) to marry a jaded older Scots back-bencher Hamish Banks. To further complicate matters, Fiona confesses to Charles that, unbeknownst to him, she has been in love with him for years. This is handled with the utmost taste and control, Scott Thomas's ravishing severity and forbearance the absolute height of intelligent agony. It's almost as if the writer and director want us to believe that Charles's great chance has eluded him, that his misguided and foolish investment in the American Carrie has been the biggest mistake of his life. 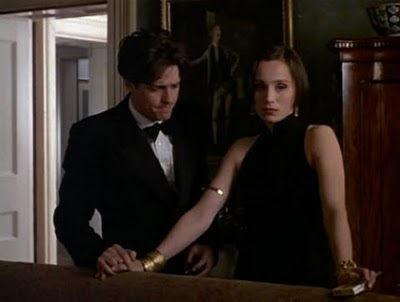 But love (naturally) is blind, and irrational, which is what makes it such a creative (and destructive) force in human relations. Charles's foppish charm and awkward good intentions may get him into trouble, but it's his hesitation, his uncertainty about the "correct choices" in life that may yet save him from turning into a coat-hanger.
Like many movies that explore the possibility of love, Four Weddings and a Funeral is about the possibility of an energetic inspiration, through difference and strangeness and the unexpected. The improbability, the surprise and delight of finding another who, against considerable odds, can give us faith in ourselves, and in the potential of our own realization and fulfillment. That possibility may include comfort, harmony, and shared purpose, but at its best it may nurture in us an appreciation for unlikeness, the exotic, of what is, ultimately, not us but some wholly alien quality that finds its counterpart in some dormant part of our nature. 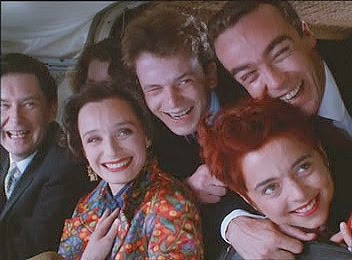 What Carrie and Charles have to discover through their engagement with each other challenges everything they believe about themselves--their view of the world, their habitual perception of reality, all the presumptions of accumulated experience, their whole background and uniqueness as human beings. MacDowell's and Grant's parody of this process nevertheless does capture something of the awkwardness of opposites discovering an antiphonic harmony, the dance of intrigue that is the prelude to true love. 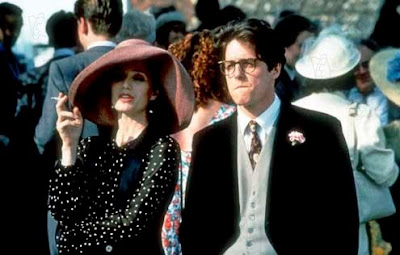 Though we may wish that Charles could but guess how lovely it might be to love Fiona, with her money, her charm, the comfort of their common Englishness to guide their every move, we know that this isn't what the movie-makers have in mind (just as we know the Charles's failed attempt to marry Henrietta ["Duckface"] is eternally doomed). We know that the message of Four Weddings is that the attraction of extreme opposites--despite the pitfalls and hazards involved--carries a greater magic, even if the hokey dramatic representation of it falls short, doesn't overcome our suspension of disbelief.
The other unities--or marriages--between Scarlett and Chester, Gareth and Matthew, Bernard and Lydia, Tom and Deirdre, David and Serena--are all constructed as improbabilities (attraction of opposites) as well, along the same lines. Love is represented as an irrational force causing deviations and confusion in the lives of those it touches, uniting true opposites, surprising and delighting its hosts. Following its dictates, the characters may experience pain, dislocation, and agonies, but these must be endured in order that the demands of their respective emotional needs are met.
The Funeral, following Gareth's untimely death of heart attack at Carrie's wedding to Hamish, sets up a counterbalancing undertone of grief amidst all this conjugal bliss, of pairing and bountiful increase. Gareth, a florid "magnificent bugger" who is the intellectual soul of this little group of friends, had declared that their number must cease being mere witnesses and celebrants, must "go forth and conjugate" themselves. This command placed the institution of marriage on a higher plane than mere friendship; the members of the group are, in a sense, a kind of extended cult, sustaining each other with faithful dedication and support. But this cannot go on forever--deeper levels of betrothal are required to enable each to ripen into emotional fruition.
The riddle of that equation is expressed in MacDowell's line at the end of the movie, when, in the pouring rain, following Charles's wrenching failed attempt at a "sensible" marriage (to Henrietta), Carrie asks him if he would consider "not marrying" [her]. This contradiction incorporates the modern paradigm of "open marriage"--the rejection of the traditional institution--not based on this problematic brand of love--in favor of an emancipated, transactional contract that allows each party to enter into it without preconditions or any pre-nuptial reservation(s). We're expected to regard the ending of the movie as a kind of triumph of love over stodgy, complacent respectability.
The film was a major success at the box office, and jump-started the careers of Grant and Scott Thomas--though audiences could have done with fewer reprises, of Grant's string of third-rate leading-man comedies which were made in the succeeding decades; rather than expanding his range, he tended to peter it out, and now has probably exhausted his welcome on the silver screen. Scott Thomas on the other hand, blossomed into a genuine major talent, notably in The English Patient [1996], for which she was nominated for Best Actress, losing out to Frances McDormand [in Fargo]. 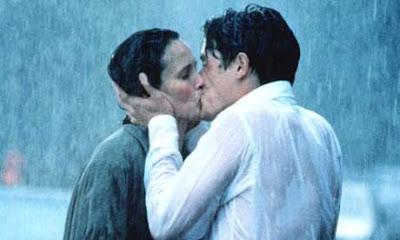 You have really schmaltzy taste in movies.

What an icky film!

I find it wondrous that you can have such bad taste in one area, and such good taste in other areas: especially photography and architecture.

""As I've said before here in my statement of blog policy, using selective moderation to control debate is a dishonest way of presenting issues, and Ron shouldn't be doing this in the interests of controlling his agenda.""

An important point. Silliman seems to have a small clique of favorites who are allowed to post. Others may get through once in a while, but after being censored probably make a nasty comment or two (understandably), and then are relegated to troll-status. And that's how most blogs, including "leftist" blogs such as d-Kos operate these days. First, the outsider is moderated (polite term for censored), then he becomes upset, responds, and is banned.

Note that Silliman does not censor much for content--Olson, a conservative, war supporter, biblethumper and fan of FoxNews appears regularly. Instead, S-man censors for what he takes to be mechanics, or tone or something (ie, be super-civil and PC, even if you admire Glenn Beck, and you get it) . Imagine a unknown Bukowski or beat trying to log on--he'd never make it...

You will note that I declare at the outset that the movie does NOT succeed. And, unless I'm mistaken, nowhere in the blog do I heap praise on it. It does, rather unusually, approach its audience on a fairly high level--at least as far as American audiences go. It's certainly schmaltzy, but what romantic comedy isn't? What about Tracy and Hepburn? Those are considered about the best, and they're terribly corner in places.

What would you offer as a superior example of the genre?

politeness/PC ...
the last refuge of the mediocre

Curtis, you ask good questions even though I was incredibly impolite, for which I'm sorry.

I liked the film called Serendipity with -- Cusack and -- who's the British woman?

I don't like the two characters in Four Weddings, I think.

That is, I think Hugh Grant is a sick duck, and the woman is very boring and not pretty.

He will only let my content through if I look a little crazy, or do not attack any of his sacred cows.

No one can say anything against Obama on that blog, for instance, or against any of his homies in the Language School. At least not directly. He has a lot of other shibboliths.

But he's the most open-minded member of the Language school, and the only one that I think can be reached through debate. In five or six years he's actually acknowledged a point I've made on at least one occasion.

(the occasion was when he cited a poll by one group and he actually had the numbers wrong. I couldn't believe that I got a concession. I think it's the only time it happened, but it's not like dealing with Stalin or Kim Jong-Il -- imagine a concession from one of THOSE guys!)

In the old free fire days on his blog we'd regularly hit 100 comments, and it was fun, but some of the commenters were just flame-meisters, and that gets old, too.

What does Curtis think of the film Serendipity?

Haven't seen Serendipity. But I like Cusack though. He was in Midnight in the Garden of Good and Evil, which I plan to blog about someday.

You create good material for community.

Let me introduce other material that may be good for our community.