The Coppertone Years & The Bathing Beauty - A Summer Cocktail

When I was a kid growing up in the 1950's, a tan skin was considered next to godliness. People who tanned easily, people who had a natural tan complexion, were considered lucky. A tan meant you had absorbed lots of healthy vitamin D, sure to be salutary to your health, and it was considered gross to be "fish-belly" white, unable to attain a natural tan without either rubbing dye into your skin, or suffering through a series of sunburns trying to attain one. It was also proof of one's access to leisure. Shut-ins and working stiffs didn't have the opportunity to frolic in the sun; tanning meant vacations, country-clubs, golf, beach time galore.
As a Northern European genetic type, I was naturally quite fair, and was made to suffer through the slings and arrows of outrageous teenaged opprobrium for not looking spiffily tan by early Summer each year. I loathed swimming parties, and envied other classmates whose skin tanned easily. A tan skin was like a proof of one's social acceptance.
Tan was sexy. 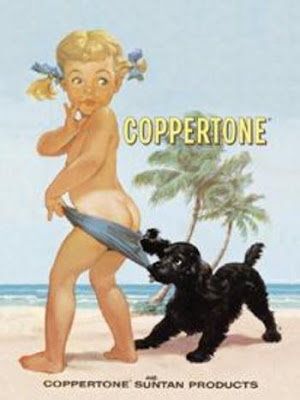 In the intervening decades of course, we were to learn how dangerous tanning is. I can still remember "tanning salons"--maybe a few even still exist--but eventually it was discovered that UV rays--the blue end of the spectrum of panchromatic light--are quite harmful to human skin, especially to those genetic types with less natural melanin (the chemical that makes skin darker). The increase in bad skin cancers of various kinds, and the thinning of the ozone layer around the earth which has exacerbated them, has drastically changed how society thinks about tanning, exposure to sunlight, and how we view the tan look. Tanning--excess exposure to the sun's rays--can cause your skin to age prematurely--unlike the claim in the magazine/billboard ad shown below ("Beautiful tan today. Young looking skin tomorrow.").
I can recall how "tan lines"--paler parts of a tanned body covered up during tanning--were thought somehow to be cute, slightly inconvenient, badges of honor, especially among women. The bathing suit craze, which really got going in the 1960's, with the advent of the bikini, prioritized tanning in a big way.
The "Coppertone years" are thankfully long gone. Today, suntan lotion is rated for degree of blockage of UV rays, and people are much more cautious than they once were about exposure. The fair look, once so despised and reviled, has made a comeback. It's okay to be really white, if that's how you are naturally. Those heavy, dark tans no longer signify health, but instead perhaps an involuntary necessity to be outdoors more than is good for one. Lifeguards sitting in their chairs constantly rubbing themselves with goo. Older people with little bandages on their foreheads after minor surgery to remove moles and neoplasms from their skin. Those hip "Kool-Ray" sunglasses, which made everything look mildly blue, are also long-gone, replaced by brown and orange coated glass which blocks the UV rays from entering the eyes. 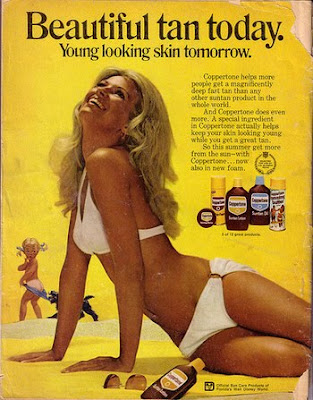 As a partially nostalgic tribute to the Coppertone Years, here's a Summer Cocktail, The Bathing Beauty, to celebrate the coming warm season.
Recipe (by proportion)
5 Parts bourbon
1 part Macadamia Nut Liqueur
1 Part Creme de Cacao
1 Part fresh-squeezed lemon juice
Stirred nicely and served up. It has a smooth, warm sweetness to it that reminds me of those lovely brown-tinted girls who once seemed so sexy.
Posted by Curtis Faville at 6:29 PM

she is visiting her 90-year old parents here..
she now lives in Carmel

well
her mother's dad (the family was from Baltimore)

had a pharmacy in East Baltimore AN
INVENTED NOXZEMA ...


the company that he started was eventually sold to Procter and Gamble
in exchange for stock...

the stock is yet in the Family in a trust and is worth $280 million!

the family lives on the annual dividends about $12 mil...

google "who invented Noxema" or some such..

when she returns tomorrow to revisit ....(she really "digs" 3-d pieces

I will mix her and me up

a batch of (your)


... I'm on the way to the Booze Store for some Buddha Bourbon!

my x-neighbor's mother is a Baltimore Bunting...

here is about her dad and Noxema:

Booze is Babylon (at least hard liquor)--though the realization of that fact required years, or even decades for some of us. So are most things, really, including blogging. Actually I respect some of those urban muslims who smash in neighborhood liquor stores....there are some decent arguments in favor of restricting hard liquor, especially to...plebes

it only takes one drunk driver to ruin a life...driving north on 5 while some insane drunk in a monte carlo heads south-- the wrong way in traffic at high speed...some might start to think along muslim , or at least methodist lines (tho' osiris forbid not mormonic)

Tho' a Bitburger pils now and then...voonderbar. ..and/or occasional sniffer of courvosier wit' a decent maduro