The Coming E-Book Revolution has Arrived

A couple of years ago, when the so-called "e-books" were only a rumor, people joked about how they would never take hold. Who would read books on a portable display screen? It seemed a serious miscalculation on the part of the media marketing industry--a dead-end idea that would disappear into thin air. Books were still convenient--who would trade them for a gadget that had to be powered and re-loaded all the time? 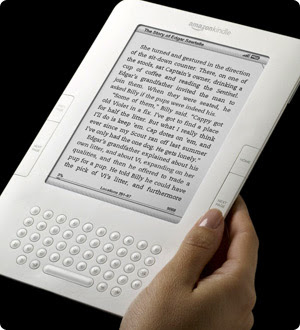 Well, guess what, folks, the skeptics were wrong. Amazon, which markets the Kindle e-reader shown above, announced recently that it was selling e-books (software text files) at the rate of 143 to 100 hardcover books. "I think the thing that's compelling to most people is it sounds like the beginning of the end," says Joseph Janes, an associate professor at the Information School at the University of Washington.
What Professor Janes means, of course, is the beginning of the end of traditional book publishing as we know it.
The computer revolution, which has had such a devastating effect on current media like television, radio, periodicals, the telephone technologies, now stands poised to perform the coup de grace to the material text publishing industry.
The internet has shown that it is more powerful than the stand-alone new or used bookstore at satisfying the broad market for books. The retail new and used bookstore business has been in steep decline for the last decade and a half, and shows no signs of rejuvenation.
In the academic sphere, classes are now conducted via closed circuit transmission, and lecture notes and class materials are routinely transmitted between instructors and students; even tests and theses are exchanged in this way.
In the field of technical reference and manuals, in compendiums and atlases and data-files, digital storage and retrieval materials have been shown to be particularly well-suited to efficient application, eliminating the need for hardcopy versions.
A number of questions remain to be answered, but given the technology of dissemination, it is certain that matters of copyright ownership, control of distribution, and access will all be addressed and solved before long. In the music industry, attempts were made to halt the progress of the elaboration of access among the general population, but it's been obvious, almost from the beginning, that trying to control the exchange of data is a losing battle.
In the used and rare book market--which thrives on the notion of a premium to scarcity and desirability of the physical artifact (as with the art market)--the dissolution of the book as an ongoing receptacle of text (content) as a market commodity platform, promises to have a dampening effect on the attraction of books as things, whether disposable, or collectible. The value we place on things which are considered obsolete, or are passing into obsolescence, declines in proportion to how useless we think they are to us in the present--books might come to be regarded as charming curiosities, like typewriters or phonographs. Physical books have been around for hundreds of years, because nothing, until now, had appeared which could seriously challenge their convenience, permanence and portability.
One aspect of concern is the ephemeral nature of electronic storage and retrieval systems. As the technology of the chip industry moves forward, in successive iterations (versions or "languages"), the data stored in obsolescing languages or hardware may be at risk. Material books offer certain advantages in this regard, since they aren't susceptible to being scrambled or rendered inaccessible due to aging display mechanisms.
A book is a thing. It exists in time and space, and has substantial durability, given modest precautions for its care and handling. No such protections exist for electronic data contained in plastic and mediated through light projection systems.
As material books begin to decline, thought must be given to how we expect to preserve what we now possess of material texts. Our culture is largely contained, transmitted and perpetuated via the universe of print. If we cede the material media to the electronic, we need to consider the fragility and jeopardy of our cultural artifacts. Allowing media marketing people to dictate these policies is a recipe for disaster.
When Robert Grenier and I signed our contract with Stanford University Press, to edit the Collected Poems of Larry Eigner for publication, we were obliged to include a clause allowing the Press to arrange for eventual digital publication. Though we understood the value, even the necessity, of anticipating this alternative media option of publication, we also felt the need to establish a material text of the work, to insure its continued existence, as a benchmark and accurate record. Going forward, 7 years after that contract was finalized, now that the edition exists, our feeling about the need for that material edition seems even more crucial than it did then.
Posted by Curtis Faville at 3:07 PM

Yes, e-literacy has arrived! Good riddance to the tyranny of paper, and the despicable elitist academic regimes it's bolstered. The e-book, if nothing else, promises to be the impetus that's needed for a true democratization of letters.

Curtis, check out Prof. Striphas's site: he's one of the most knowledgeable people I've encountered out there on the topic of the e-book.

will I be able to get an unexpurgated copy of Farenheit 451?

the BOOK. Not the MOVIE. ?
with the
flick-of-a-finger??