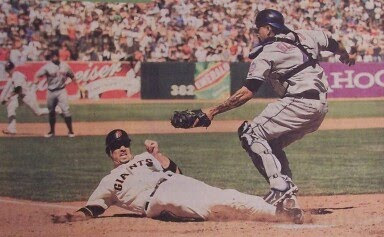 The technology of officiating is moving steadily, though reluctantly, towards increasing efficiency and accuracy of calls in professional sports.
The National Football League now routinely uses challenges to permit the use of instant reply to fine tune calls made under the pressure of the moment. Each head coach has a limited number of challenges. No one seems to question the wisdom of permitting some remedy, especially on plays where literally inches can determine the outcome of a game. No one--and football officials are no less human than the rest of us--can be expected to get every detail right, in the heat of the moment, when 22 player are swirling around them.
Professional baseball offers some difficult problems for replay challenges. The calling of balls and strikes has traditionally been thought beyond challenge, because there are so many close calls in every game, that to try to set limits on which calls to challenge would be very difficult, and would take away from umpires an authority which might unsettle the delicate balance between the players' natural sentiments, and the umpires' ability to manage the game.
Calls regarding tags on the bases seem particularly well-suited to challenge, since a slowed down sequence on replay can reveal subtle details about an action which cannot be seen in real time, especially if the viewer (the umpire) is at the wrong angle to see them. I don't think there is any doubt that a significant proportion--perhaps 30% of all base path calls--are wrong. There is even general acknowledgment in the media that umpires routinely "give" calls to shortstops and second-basemen on "pass-by" plays at second base because they want to discourage injuries to these fielders in cases where standing on the base would put them at risk from runners coming in high and hard to intimidate them.
Traditionally, the strike zone has been subject to a wide latitude of interpretation throughout the history of the game. It was once thought that American League umpires routinely had a "higher strike" zone than National League umpires, who would call lower strikes than their counterparts. This may well have been true. But the greater difficulty involves the vast difference in the application of the defined zone, from umpire to umpire. The strike zone is officially defined horizontally as the width of home plate, and vertically between the player's knees and the middle of the trunk (or chest). In practice, few umpires call strikes above the player's belt, a clear violation of the rules. In addition, based on the television replays now in general use, umpires clearly are inconsistent about other aspects of the zone.
Yesterday, the Giants beat the New York Mets in the bottom half of the ninth inning, with Travis Ishikawa sliding safely under the tag of Mets' catcher Henry Blanco, as reported by camera shots like the one shown above. Even Blanco admitted that Ishikawa was safe. But home plate umpire Cuzzi, who had been having problems throughout the game, missed the call, and the Giants ended up officially losing the game, simply because the umpire got the call wrong. Games decided this way leave a sour taste in everyone's mouth, even the team benefitting from the gaff.
Instant reply is coming to baseball, and not a moment too soon. It also seems plausible to imagine that a sensitized holographic strike zone may someday be instituted, eliminating, in effect, the need for an umpire to call balls and strikes, except for swing judgments and dropped third strikes.
Posted by Curtis Faville at 7:08 AM

While demanding greater coordination and technique than bassetball, soccer or football, baseball's still fairly primitive, and ...boring frankly, even compared to, say, high-level tennis (the tennis business ain't great, but the top players are ...real athletes, not just thugs...tho' granted a few pitchers must have great technique...) .

Pro-sports represent a fairly recent development, historically speaking. Perhaps an egghead (like yrself Sir F!) might interpret them as a resurgence of a pagan-like hysteria for gladiator events..if not blood sport (also seen in the craze for pro boxing, rasslin' etc). Gibbon at some point says something like that--when sports hysteria returns (along with...porno), the Empire's in danger. I'm not quite to Gibbon's POV, but something to keep in mind.

Interestingly, quite a few "progressives" aka yankees (not the NY sort, but Bawstun) opposed the rise of college athletics (and pro) around the turn of the century, as with Charles Eliot (TSE's great uncle, ah believe): Contra-athletics.

RASSLIN'? Lemme tell ya about rasslin.

Baseball has often been described as a thinking man's game.

What fascinates me about it is the extraordinarily tight nature of the distances and speeds. A well-placed bunt will only work if the runner has real speed. A grounder to the short-stop will generally result in an out, but the slightest delay in fielding it can cost an out. Stealing bases depends upon the sheerest fractions of a second, and movements of the tag and slide. The slightest edge, by the runner, or by the pitcher's wind-up, can affect this timing. Hitting home runs involves impacts along the cylinder of the bat in increments of centimeters--the difference between a routine fly and a 360 foot blast. A miscalculation by the batter of the speed of the pitch can usually cause a miss, or poor contact.

The game is wreathed in a myrias of statistical measures. Every event is categorized. Manager and players all use this information in calculating odds, leverage--"playing the percentages".

I played baseball--but I'd still be fascinated if I'd never done so. Certain aspects of the game--throwing hard as pitchers do--is very stressful on the body. The casualty rate for major league pitchers is really very high--few of them have careers unmarked by medical issues.

I've never thought of baseball as a "gladiatorial" sport. Football, maybe. Basketball has morphed into a different sport than originally conceived. It's a much faster and rougher sport than the way it used to be played, and most of the ordinary rules are routinely broken (double dribbling, shoving, body-blocking, dunk-hanging, etc.).

Word above should be "myriad".

Baseball may be the most demanding sport of any US pro sport, taken as a whole (in terms of skill, technique, finesse etc...) but that doesn't redeem the corporate aspects. The salaries are outrageous as are the ego's. The stadium construction involves massive slushbuckets and rackets as well. The owners' incomes and lifestyles are also outrageous.

Really, reading the LA papers you'd think the entire economy depended on how the Dodgers and Angels were doing. I wager some downtown brokers base their trades on the pennant race (Dodgers lose, and your Chevron stock did too).

Pro sports have become a type of monopoly really, generally exploiting the working class. That may seem like a bit of a generalization or overly didactic but ...that's the way it is. Any authentic progressive should oppose pro-sports of any and all types--not that I think much will change, until there are either brownshirts or communists--or both-- marching in the streets (as could happen, sooner than you think).