Lincecum in a Funk at the Worst Possible Time

The Giants had a terrific July, rising up from fourth place to within a game and a half of the division leading Padres. They accomplished this, despite not enjoying the best contribution from their vaunted "Ace" Tim Lincecum, winner of the previous two Cy Young Awards in 2008 and 2009. This last weekend, the Giants dropped two of three to the boys from San Diego, whose pitching corps--both starting and relieving--rivals that of any other team in the Bigs. Signally, Lincecum had another poor start on Sunday, giving up 8 hits, 3 walks and yielding 6 runs (5 of them earned). Timmy's last 10 starts have resulted in a ho-hum 4.91 ERA, during which span he was only 3-5, giving up 69 hits in 58 2/3's innings, 8 of them home runs. His ratio of strike-outs to batters faced is still respectable, but he's clearly not the same pitcher he was last year, or even at the beginning of this year. 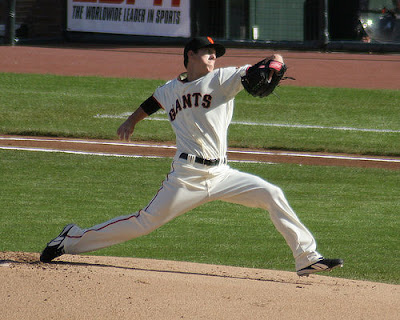 His velocity is down, hovering around 90, instead of above 95. He apparently is having trouble controlling his pitches, so he's experimenting with pitching from the stretch full-time. He throws a lot of pitches in the dirt, which would suggest his release point is off.
All of this couldn't have happened at a worse time. The last two years, when the Giants clearly didn't have the talent to contend in their division, Lincecum's performance was a bright spot on the roster. With a power team, he might have won 24 games, and ended up pitching in the Series. The team's recent success has put them right into the thick of things, and this is the point in any given year, that the ultimate success of any team in the standings will be decided.
But there's a deeper question here, one that has bothered me going all the way back to his rookie year. He's listed at 5'11" weight 170 lbs., but somehow he's always seemed fragile. His arm motion, a rather extreme whipping action, would appear to put great stress on his shoulder, if not his elbow too. His velocity has usually been high, for his size. The contemporary wisdom on handling him has been to give him five days of rest between starts, and take him out by the 5th inning if things aren't looking up. Could it be that after two full years, and one-half of another, he's beginning to get worn out?
I speculated in a previous post that his career might be abbreviated by a lack of strength or stamina. Ron Guidry, a pitcher with about the exact build of Lincecum, had a good career, which didn't start until he was 26 in 1977 (Lincecum is only 26 now, and already has two Cy Youngs under his belt). Guidry got a CY in his 27th year, going 25-3 with 248 strike-outs and a 1.74 ERA--impressive stats for any pitcher in the history of the game. Yet Guidry's career was at an end less than 10 years later, at only 36-37. Don Gullett, another lefty of about the same build, had a very short career, which ended at only 27 after only nine years. Koufax, only a bit bigger in stature, and perhaps, for a brief period, the greatest left-handed hurler, for those wonderful four years at his prime, in history, ended his career at age 30 after three Cy Youngs.
The common thread here is the fragility of the body. Very hard throwing left-handers, especially those of slighter build, with big wind-mill pitching motions, generally don't wear well. I speculated before that Lincecum might only be good for 4-5 seasons, while a more balanced hurler, like Matt Cain, might expect to pitch until he's 40, giving you 230 innings, winning 13-17 games, year in, year out. Which kind of pitcher is worth more to a team, I inquired previously in rhetorical fashion? Obviously, on a winning team, every player is crucial to its success. Championship teams rarely have underperformers at any position. Continuity may be important at being regularly competitive, but it means nothing in any given year, unless everything comes together. That's a definition of mediocrity. Teams which always "contend" but never win pennants or championships (like the Giants) are frustrating for their fans, who would rather see a winner once in a while, than route for losers or also-rans year after year, decade after decade. Since coming to San Francisco in 1958, the Giants have never won it all.
What's most frustrating of all is that the Giants have actually made up important ground this year--in improving their power and team average--and they had what on paper looked like one of the solidest starting staffs in either league, and a great closer in Brian Wilson. After very good starts early, Cain and Zito have declined, though Zito still looks the best he has since coming over from the Athletics in 2007. Sanchez continues to be a puzzle, sometimes pitching like an Ace, at other times sinking into mediocrity in the middle innings, as if he were losing his grip or his concentration (all the tools, but no steering wheel).
At this critical juncture in the season, the starting corps needs to become more dependable. It's unlikely, even with their improved offensive potential (particularly Buster Posey, who may become the next Johnny Bench), it's unrealistic to expect them to score more than 4.5 runs regularly. With a team ERA of about 3.5, there isn't much room for error. If the Panda were to go on a tear, and Huff and Uribe started hitting better in the clutch, it just might work. Potentially, this is a great line-up: Rowand and Sanchez are having sub-par years, but either one might catch fire. Huff and Burrell seem revitalized in their new surroundings. Imagine how good this line-up could be, if it all came together at the same time:
Torres  .310 with 100 runs scored
Sanchez  .320 with 80 runs scord
Huff  .300 with 30 homers
Posey  .325 with 20 homers and 115 RBI's
Sandoval  .320 with 100 RBI's
Burrell  .280 with 20 homers
Rowand  .275 with 20 homers
Uribe  .280 with 20 homers and 85 RBI's
&
Ishikawa and Schierholtz coming off the bench.
But this is the stuff of dreams. Before the champagne must come the sweat and concentration.
Our immediate concern is Lincecum, and what seems to be happening to him. Is this just a temporary setback, a little wrinkle on the road to Cooperstown, or the beginning of a rapid decline in an abbreviated career marked by injuries to a dangerously fragile body? There are no public reports of medical issues...yet. But it wouldn't surprise me if Lincecum didn't finish the year out. If that happens, we can kiss a division crown, or a wild-card spot goodbye.
At the least, they've been "competitive" so far this year. But after 53 years, it's beginning to seem like next year will never come.
Posted by Curtis Faville at 4:19 PM

this kids parents should go to jail!

The fragility of pitchers is due to their constant use of the rotator cuff.

Most players only make one play or two per inning.

Pitchers are constantly using their bodies, and their minds can get thrown off, too.

Some good pitchers only last a year. I forget the name of the one whom Tom Clark lauded. He had only one good year, and then became a farmer.

Died last year, I think, and Silliman had a quick note on him, or someone did.

Or maybe it was in a book I was teaching about athletics and poetry. That's it, Fredrich, Heydrick, something like that.

In Seattle I was doing a temp job and a woman there's husband was an ace rookie for the Tigers. He lasted two seasons, then tore his rotator cuff.

Was then a point man on the garbage run through a wealthy neighborhood that abutted a crummier one.

It would be nice for the artificial intelligence folks to come up with a robot pitcher who could outdo Koufax and co. But AI can only do binary decisions.

Pitchers have to keep six or seven pitches in mind. They have to think about the sweet spot for any given batter. They have to watch three bases for stealers.

AI will never be able to come up with so many variables.

Just reading about the death of Bobby Thompson and the "shot heard round the world". Interesting that both the Dodgers and the Giants moved to the west coast shortly thereafter to make room for the Mets. My favorite Giant was always Juan Marichal, whose Lefty Grove leg kick was more entertaining to watch than a Koufax curveball, a headfirst slide into second by Maury Wills or a trademark basket catch by the say hey kid.

How many talented kids and their families only tolerate public education because it provides access to organized sports? How many capable coaches endure certification as teachers in order to coach?

Craig, Marichal was also my favorite player of all time. He was in Cooperstown last year to sign stuff. He looked pretty good.

The local big town is called Oneonta, and they had a team there for thirty years -- triple A, or maybe just single A, called the Tigers. The owner was 95 and sold it to another team on the stipulation they remain at least two years. They immediately left, and we thought we'd be without baseball.

But another team stepped in. It's not a pro league but something called Collegiate Baseball. These kids are from colleges all over. One was from Virginia Tech and another from UCLA. They had about twenty pitchers, and just one fielder for each position.

The pitchers could all throw about 85 mph.

What's the fastest anyone can throw? Can some regularly throw over 100 mph accurately?

I watched a game this summer with the Collegiate Team and thought they were about as good as the single A team they replaced. I'm not an aficionado, but the only thing I didn't see was a homerun. The fence is about 390 on the corners. In the middle it's a bit deeper I think -- 420 perhaps.

The field is shaped like a parachute rather than like a perfect semi-circle with home plate as the axis.

It was a lovely night. all my neighbors had gone there for a birthday party, and the young men signed baseballs and programs, and were very pleasant. College boys.

They said that they got free room and board and a small stipend which amounted to board.

all of them were hoping to make it to the majors, they said, or they wouldn't waste a summer like that.

To my knowledge, Nolan Ryan--who played for the Astros, Angels, Rangers and Mets during his career, was the fastest, often throwing pitches over 100 miles per hour. He has the most career no-hitters (seven), and the most career strike-outs in the history of the game.

You didn't want to get beaned by a Ryan fastball.

Marichal's leg kick was pure poetry. There have been other pitchers with distracting wind-ups. Luis Tiant had a weird one--turning his back on the hitter, and then spinning slowly back to his release point.

They should pay all 'em of the bums, whether greats, or not like a base salary--50 grand a year or so.

The Dodgers are nearly bankrupt from coughing Manny R's 45 million (and Mannywood's now closed, due to MR's injuries). Not to say McCourt's alimony to his ex-Ho.


For an interesting read, CF check out the book on DiMaggio's mafia connections. Don't recall the writer...(some material on my blog). The yankee clipper actually hired Frankie Costello--the Prime Minister of Murder, Inc--to do his accounting work for him. Nothin' but bad joss. Yet that was hardly anomalous. Pro-baseball (not to say NFL, NBA, etc) was tied to the Mob from the start (as I was reminded a few weeks ago whilst re-perusing...F Scott's Great Gatsby...recall the pal of Gatsby, Wolfstein, or 'heim or somethin' who "fixed the world series"..was it 1919 or so...
that was REAL sir. F Scott knew the score on pro schports...)

but boxing is the worst, a human rights abuse