Yesterday, the 49ers were trounced by the Kansas City Chiefs, a team they were picked to beat. They were outplayed, and outcoached, in every facet of the game. Aside from a touchdown scored in the last five seconds, they failed to reach the end zone.
Last week, they played well against the Saints, and but for a few small breaks, they might actually have beaten them. But the pattern, the overwhelming evidence, now, seen in retrospect, of Smith's five plus years with the team, is that Smith isn't the quarterback to lead this team into contention. In fact, he never was. I've spoken about this before, but looking into the history, another disturbing trend becomes evident: Smith is a coach-killer. 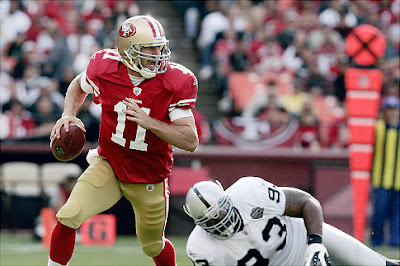 KC usually plays well. Im a lukewarm supporter -fan of the Broncos (Elway era at least) and KC always was tough. Then AFC west's probably one of the toughest divisions, tho', apart from the Chiefs, they all seem to be sucking as much as a liberal bureaucracy sucks, as Miss Fiorina might say.