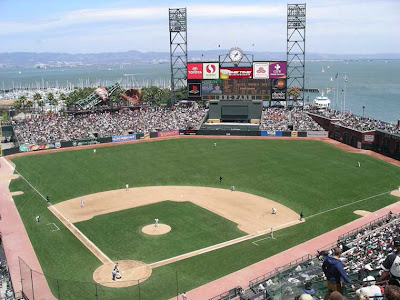 This has been a weird year for the Giants. When it began, the rap was that they had great pitching, and would have to scratch for every run, using heads-up base-running, bunts, and great defense to win close, low-scoring games.
The great pitching has come through, though it's been spotty at times. Cain, Zito and Lincecum started out fine, but Sanchez was uneven. Then Lincecum went into a funk (in August), and Zito went into a nose-dive too. Over the last month, the staff's ERA has been unbelievably low, with opponents batting well under .200 collectively.
Meanwhile, the hitting has been feast or famine. SF's power, suspect in the beginning, was bolstered with the acquisition of Pat Burrell (18 homers as a Giant), and the mid-season addition of Buster Posey (SF's rookie-of-the-year candidate). Huff, overjoyed at joining a winner, and Juan (monster-swing) Uribe, have both supplied plenty of yard. At the same time, Sandoval and Rowand have both had off years, and Sanchez, Renteria and Torres have all had significant injuries. If any two of these five (except for Torres) had had good or better years, the Giants would probably have been 10 games ahead by now. At least three games were stolen by bad umpire calls, and the strike zone has never been flakier. (Can anyone recall another year in which most home plate umpires seemed chronically uneven, not having a clue as to what was, and what wasn't a strike?)
Last night, Cain served up two gopher balls to Gonzalez and Stairs, and that pretty much sealed our fate, despite a late rally. This afternoon, we give the ball to Zito. I'm apprehensive. Zito's had flashes of brilliance--the old Zito, mixing his big round-house curve with a deceptive fast ball--but he's been unreliable in important games, walking batters and giving up the occasional clutch double or home run.
Given last night's result, it wouldn't surprise me if the Padres, desperately trying to salvage what had been, until three weeks ago, a great season, sweep us, forcing a one-game play-off in San Diego. The Giants have been heart-breakers this season, but whose team hasn't?
The Phillies had been up and down most of the way, until a late-season surge put them out of reach. Among the three contending teams in the National League, any combination of outcomes is possible. Even the Giants--currently ahead of both San Diego and Atlanta--could end up losing both the division and the Wild Card, if they were to lose three more. After leading by three with three to play, that would be tragic indeed. If San Diego were to win all final four games, it would go down in the annals as one of the great upsets in the history of the game.
The Padres and the Giants have similar kinds of teams. Both have great pitching, with unreliable offenses, though the Giants have surprised everyone with the home run numbers. San Diego has only Gonzalez as a legitimate threat. Nevertheless, the Giants have only scored 31 more runs for the whole year. (The Phillies, for instance, have scored 758 to the Giants 692.)
Which brings us to off-season speculations. Most people think that the Giants would go down zip in the playoffs. But Atlanta and Cincinnati don't stack up particularly well against San Francisco, and I've heard rumors that Philadelphia is more worried about the Giants than they are of any of their other three possible foes. Great pitching almost always wins out against great hitting in a short series, and three or four games of great pitching is always a possibility given a staff like ours. The question is, which guys show up? Those capable of one-hitting you through 7 or 8 innings, or the ones who lose focus by the third? In the play-offs, it's about who responds best to pressure. The Phillies have been there before, so the smart money's on them.
But in a short series....
We'll see today which Zito shows up. 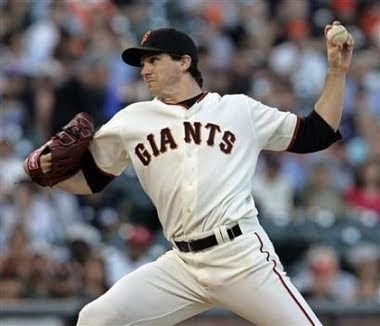 ___________________
Addendum:
Post-game review. Just as I feared, Zito wasn't up to the task, and ended up giving the game away, beginning with two unearned runs in the first inning, courtesy of walks. He was pulled in the beginning of the fourth, after walking the opposing pitcher. Not to take anything away from Stauffer, who pitched masterfully before being relieved after 7 1/3 impressive innings. The Giants could still have given the Pads fits, if they'd managed to get just one more hit in the ninth off Bell, but Guillen grounded into a double play before Ford, pinch-running for Sandoval at first, could steal second. I'd have given Guillen the take sign, and sent Ford on the first pitch, but Bochy was already in the club-house, having been summarily tossed for arguing the strike zone. Which brings me to my final frustrating snipe: Umpiring this year has fallen to what seems like an all-time low, with dozens of terrible calls, and a strike zone that wanders and wobbles around like a jack on a spring. There were two missed base-line calls which were sheer howlers, the second apparently as "reparations" for the first.  The home plate umpire called at least a dozens balls 6 inches off the outside corner strikes, culminating in a third-strike call that had Buster Posey standing dazed and incredulous in the bottom of the 7th. 30 seconds after Posey hit the dug-out, Bochy was bounding onto the field to get in the face of Mike Everitt, who promptly thumbed him 3 seconds later. Everitt should be given the heave-ho, or simply sent back to the minors for three more years of "seasoning." A little less pepper might be indicated. Maybe the guy has hemorrhoids.
_____________
Post-Addendum:
As everyone by now knows, the Giants defeated San Diego on Sunday, behind Jonathan Sanchez, whose 3-hit pitching over 5 innings, followed by five lights-out relievers culminating in Wilson's n0-hit ninth, bringing the curtain down on the Padres once-optimistic season. These two teams, which seemed so much alike, finally were defined by their starting pitching, and raw power, as the Giants hit 162 homers (slugging percentage .408--compared to the Phillies 166 homers, and .413  slugging percentage--both the Phillies and Giants trailed the Reds in both categories), against the Padres 132 homers and .371 slugging percentage. The acquisition of Huff and Burrell, and the blossoming of Torres and rookie catcher Buster Posey, had the greatest impact on the potential of this team, which was already a contender on paper from the beginning of the season, based on the quality of its starting arms.
The Giants will probably be fairly matched against the Braves, in their first post-season series, but if the Phillies stay on their late season roll, it's doubtful they can get by them to reach the World Series. Next year, however, given no great fall-off in their offensive production, they could easily run away with the National League. Imagine what three 20 game winners (Lincecum, Cain and Sanchez) could do for this team, and Bumgarner just a few wins behind these three. They'd be like Atlanta was, when it had Glavine, Maddux, Smoltz and Company.
The Giants entertain Atlanta on Thursday evening at AT&T park, with Lincecum on the mound. I give the Giants an even chance to take the series, especially if they win game one in nine innings. Posey is the odd-on favorite to win Rookie of the Year honors; voting is completed, the playoffs won't factor into that judgment.
Posted by Curtis Faville at 6:39 AM

LA's finito for this year-- that's probably due to the McCourt fiasco as much as to playing--tho' Manny R. again was out with injuries (the bum collects his 20 mil.+ per annum either way).

So many a Dodgerios fan then turns to SD, however boring (they got a few decent pitchers but not much for hitting, Gwynn overrated), rather than the Giants, one of those Fog City mobster teams ('niners, raiders, A's etc.--), or the Anaheim pussies. The last time I rooted for SF was when like Matt Williams still was around, or was it Will Clark. That was a team.
Zito's a pretty good pitcher tho'. Sans sluggers tho the grand old game's pretty bor-reeng IMHO. Nothin' like a Manny HR swat down center field, heading up as it crosses the fence.

The Giants 'll probably take the wild card...but I doubt survive the playoffs

And looked the wrong Zito showed up--and if you think the SD hitting sucks, try the Fog Town bums.

Down to the wire--my shekels are on the Pads for NL west (tho Giants still can take wild card).

Such a beautiful azure bay and harbor--besmirched by that large capitalist-gladiator arena. Poor design/planning IHMO. ah wager the old californios would agree. At least Candlestick was up on the hill a way