John Taggard [1942] is a rough contemporary of mine. Though he was born five years earlier, his first book, To Construct a Clock [Elizabeth Press], wasn't published until 1971, at about the point that I was finishing up at the Iowa Writer's Workshop. I never met Taggart face to face, but followed his work from those early days.
But Taggart's work had already, by that point, achieved a finish and clarity that I felt I could only dream of. It was apparent that we shared an interest in the American Gothic Modernist poem, centered around the Objectivists, Williams, and the nodes of Black Mountain (Creeley, Blackburn) and Corman's Origin (Snyder, Bronk, Enslin) circle--an interest as an application to further inquiry. It seemed optimistic to believe that Zukofsky and Creeley had not exhausted the possibilities of the clinically spare lyric, and that more might be done.
Of the poets interested in the "difficult" lyricism of Zukofsky or Oppen, Taggart had by far the best shot at making something of the attempt, having a fine philosophical turn of mind (rather perhaps like Michael Palmer's), and a wide reading in literature and allied arts.
Now, almost 40 years later, the full narrative of the development of Taggart's oeuvre can be measured and appraised, as his new Is Music: Selected Poems has just been published by Copper Canyon [2010]. Taggart's early preoccupation with the Objectivist's primary tenets of clarity, objectivity, sincerity, and intelligence was reverent, though occasionally ironic as well.
The "rediscovery" of the Objectivists during the 1960's caused a reappraisal of the value and purpose of the poetry of the 1920's and 1930's, arcing over the period beginning with the Second World War and the appearance of Allen's New American Poetry anthology in 1960, signaling a renewal of interest in abandoned inheritances: Sheeler, Stein, Weston, Satie, the Group Theatre, etc.
Amongst the rhetorical extravagances of 1950's American poetic styles, a bold departure was suggested by Oppen's three books of the 1960's: The Materials [1962], This in Which [1965], and Of Being Numerous [1968]. It may have seemed that, almost overnight, the possibility of an Objectivists' renaissance was at hand. No one, in my view, has any better claim to being the avatar of such a revitalization than John Taggart. 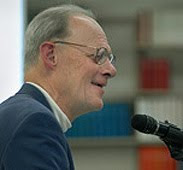 Seriality may be imagined as a metaphor for the building of a poem, a piece of music, or the inherent shape of a material object, its crystalline elemental interlocking structure. The Metaphysicals (Donne, Herbert, Marvell &c.) were preoccupied with congruent or dissonant cognition (discordia concours--the combination of dissimilar images, or of occult resemblances in things apparently unlike), with elaborate conceits and poised dilemmas. Taggart's earlier application of the principle of metaphysical conundra to the clear physical delivery of the Objectivists, was bound up with the confinements and logical dead-ends of language as philosophical inquiry. The later style privileges music as the queue for the apprehension of meaning. As in Zukofsky, speech and song define the limits of pitch and tempo through the demarcation of staff, bar and tonal notation. In Renaissance musical composition, construction of familiar tropes, of phrase and combination, enunciation and rhetorical dialectic, produces repetitions and balanced renditions. In jazz--a major interest of Taggart's--free variation in real time allows the aleatorical indeterminate, of alternate selection and accidentals. The poem's outcome then may be undetermined at its start--
Pastourelle 7
Mud along the edge of the creek
creek or small river
and how during the summer
low water and increased edge of mud rank smell
in the heat
many rocks exposed slick to touch
the problem is not finding a rock there are
many
the problem is not turning
into a rock
the problem is a problem of how
far how far can I throw myself and how far can I
throw myself again.
If the problem in Taggart's earlier verse was how to contain thought, in language, to restrain its slippery, wayward tendency to smear sense, to wander off point, the later style embraces indulgence. The problem isn't in finding a rock, or in not turning into a rock, but of how to throw oneself forward. This forwardness is the central driving motive in much of the verse published since 1980. Combined, again, with his interest in seriality, in poetic sequences in which intertwining thematic threads are woven out of musical strands of nested phrases, this produces a poetry of diverting pleasure--
As color considered as a car a pink Cadillac
customized
the whole thing taken apart/stripped down to the essential torse/torso
where the car came from the luxe calme and volupté junkyard
where the job gets down where else it can only be
Rothko's body shop
a long job it takes a careful kind of character you have to know what you're doing
careful and serious
twenty-three coats of pink is serious
one after or on another one coat which is lightly sanded/hand-rubbed another
coat lightly sanded/hand-rubbed
twenty-three coats
a long job it takes time for a coat to dry
you have to take a break take your time step back sit down have a smoke
you have to think about it
Along the staff of percolating vowels, a process of inquiry and gestural play is carried out, through phrases whose constantly shifting syntactic relationships are teased into new arrangements, resistant positions, surprising antinomies. Again, this later example, from There Are Birds [2008] suggests to me the work of Michael Palmer--but I think these two writers probably came from different places to arrive at a similar destination. 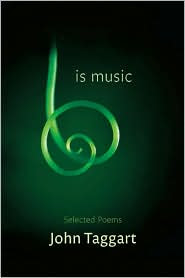 Taggart's music is music.
__________
* For a fascinating discussion of The Pyramid is a Pure Crystal, see Caitlin Murray's Losing Count and Not Caring with John Taggart's "Pyramid Canon" at Impossible Objects blogsite (http://impossibleobjects.wordpress.com/2010/03/14/losing-count-and-not-caring-with-john-taggartss-pyramid-canon/).
Posted by Curtis Faville at 7:41 AM

To Construct a Clock

That's what the writing you posted here reminds me of--like a room of clocks, ticking away, synchronized precisely...crystal, machine like. Aka formalism. the musick of metronomes...

maybe he could have written about someone smashing in the clocks. Or at least making them melt, or spin backwards, making an eerie muzak..........:]

the octahedron's sort of cool tho'...imagine with like naked ladies, and maybe neon lites on each side

yr stupid Anny, not to humorless, and a cowardly little hallmark puto

I piss on TS Eliots grave (sorry Sir F, dat's how I feel. Beckett said something like that...and one gets a whiff of the TSE precious here )

I have been enjoying your blog very much. I'm happy that you liked my discussion of Taggart's The Pyramid is a Pure Crystal. Thinking about the poem as a octahedron is fascinating.

Your Taggart piece is terrific.

I told Silliman about it and that's why he posted a link.