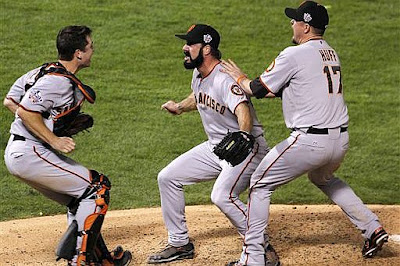 Great pitching, and a few good performances (ie, Huff), but ... not real exciting ball--the Giants are like superb techies, not sluggers or heroes. And the Rangers sort of fell apart.

Recall the last few SD-SF playoff matches. Had the Padres' hitting not been slightly off, they would have taken it, and then defeated the Texass creampuffs as well. For that matter, had Manny R. not been out with an injury (and the McCourt fiasco...not happened), the Dodgers might have taken it as well (and not sure of final tally, but IM pretty sure that LA won more against SF). Congrats, sort of.