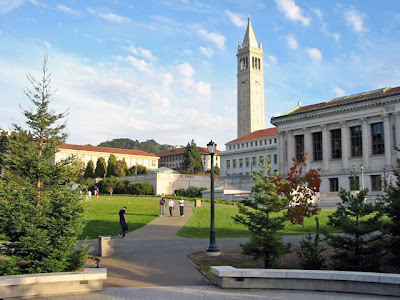 It was reported today in the San Francisco Chronicle that the University of California had announced at a meeting of the Regents in San Diego that it was giving 4 million dollars in incentive pay and bonuses to employees of its system. In several cases, executives saw pay increases of as much as $41, 205 per annum. Most of the money was concentrated (as one would expect) at the top end of the pyramid. None of those qualifying for these benefits have anything to do with the actual business of teaching or maintaining the facilities of the UC campuses--at least insofar as I can tell.

State funding to the UC system has been falling precipitously over the last several years, as state revenues continue to decline. California has been in a severe budget crunch, borrowing heavily and cutting expenditures where it thinks it can. Increases in student tuition, cuts in curricula have become a commonplace at each annual system-wide budge cycle. In this atmosphere of restraint and scarcity of resource, you would think that the executive pay would be frozen. But nothing of the kind has been occurring. Each year, the regents authorize hefty raises and "incentive" bonuses to the highest paid executives in the UC system, insisting that in order to be competitive in the executive market, it must pay equivalent amounts to hold or attract qualified talent to important management positions.

How is it that in hard times, a university system--based upon the quality of its instruction, and its research facilities, is busily shrinking itself, while its historical mandate, to educate citizens of its jurisdiction (the state) as a public duty, is suffering--can choose to pay its non-teaching executives huge presents of pay and merit bonuses?

In private industry, governing boards are free (within the law) to pay executives obscene amounts of compensation--even during lean times--even when the corporation or company itself may be failing, or even going bankrupt. That's "private" after all and people are free to pay whom they wish, for reasons that only they (and supposedly their shareholders) may be able to justify. But a publicly run bureaucracy--particularly with respect to non-union executive employee positions--depends primarily upon public funding. The University of California is not a profit-making enterprise. There can be no rewards for management which cuts costs while revenues are falling, because the responsibility for seeing to the management of the system must share equally in the health or sickness of the system as a whole.

Historically, top-heavy bureaucracies such as the UC system are self-protective and expansive in character. They can always justify increasing their staffs and starting new departments, but they jealously guard their vital interests as parasitic dependents upon the organization. Though they take no part in the actual running of the departments and classes that constitute the institution, they think of what they do as crucial to the health of the system they inhabit.

One of the bonuses this year goes to Grace Crickette, UC's chief risk officer, who, according to a UCSF spokesperson, "has saved the university over $100 million by driving down the cost of workers' compensation," and negotiating better terms with insurance companies; and the raises "are a small price to pay for people working at the highest level." In other words, Ms. Crickette's great contribution to the University of California's function as a major educational institution, has been to cut staffing, and reduce insurance coverages. Executives will often cite their cost-cutting efficiency as a measure of their importance to an organization; after all, they save money by laying off unnecessary employees, streamlining and downsizing. I suppose you could even make a case for simply off-shoring the UC system, starting campuses in Beijing or Delhi, in order to improve profits. Since the primary beneficiaries of the UC system are now the executives who run it from the top, if they could make themselves more important by actually reducing the activity (teaching) of their "company" then we would owe them more and more, whilst fewer and fewer teachers, teaching fewer and fewer citizens of their state, were being paid less and less, each fiscal year.

The tendency to reward people for finding ways to wring economies out of quality organizations, flies in the face of every priority the public university tradition stands for. The natural tendency of a governing board to reward its chief executives with more and more unreasonable pay and benefits, is regressive and insupportable in a publicly run and funded educational institution. There is no justification whatever in thinking that the product (excellent teaching and research) depends to any significant degree upon the competitiveness of its relatively honorary executive positions. Mr. Yudof provides nothing to the university except as a figurehead who shakes hands and makes empty speeches. And that would be true for most of the other "executives" who occupy chairs underneath him, but above the actual instructional activity of the colleges.

No one in a position of authority in the UC system deserves to be paid more than $175,000 per year. These public relations and mid-level MBA's learn in business school that the first duty in your portfolio is in making yourself promotable, in improving your chances for promotion. In other words, their primary product is selling themselves, and what their job description consists of, so that it always appears that they--and their "product"--are absolutely crucial to the health of the business they're pursuing. It is people like this who suck the life-blood out of an organization, confiscating its value and profit--earned or produced by others (in this case, the teachers and researchers)--for their own benefit and self-aggrandizement.

If there were any decency among the UC Regents, in these times, they would cut UC executive pay by 15% across the board. Anyone who cried foul could be summarily fired. There would be many more candidates lining up to replace them. In our present depressed employment market, we can be sure of that! And many of them would be Chinese and Indian and Canadian and Japanese and Indonesian and English too!

The present crop of overpaid "executives" should also have their housing and parking and cadillac health plan subsidies eliminated too. And their retirement benefits should be cut, by at least 50%, and they should make substantial contributions to these benefits, out of their own salaries. How much more honorable would it be to see these same fat-cats taking public transportation, renting apartments near campus, and visiting the Kaiser hospital emergency rooms. How much more caring and concerned would these executive parasites be if they shared some of the burden they plan to impose on the students and professors!

THE REGENTS OF THE UNIVERSITY OF CALIFORNIA

PRESIDENT OF THE UNIVERSITY OF CALIFORNIA Mark G. Yudof

PRESIDENT FOR INVESTMENTS AND ACTING TREASURER OF THE REGENTS Marie N. Berggren

SECRETARY AND CHIEF OF STAFF TO THE REGENTS Diane M. Griffiths

Posted by Curtis Faville at 8:36 AM

so,
where ARE the students, their parents and The Taxpayers?

why aren't they trowing bricks through these
...Administrators' windows?

striking? dropping out? refusing to pay via credit-cards/loans...

the system not only in CA /Uc but everywhere else
is corrupt! ... but "legal"

Now, this is corruption, venality and human garbage in high places.

The UC Regents rank with some of the sleaziest criminals in the world. It's not a university system--it's a corporate-stalinist Mob. And Schwarzenegger's appointments--mostly finance cronies from Wachovia-- made problems worse.

Probe into UC Berkeley spending identifies $3,000,000 expenditure used to do the work of Chancellor Birgeneau ($500,000 salary) Provost Breslauer ($400,000 salary) and many vice chancellors.
It is time to make public employees do the work of their jobs and use the saved millions for California students.

where IS
Mario Savio

now that we/you need him?

UC-Co could also use a few more Denise Dentons