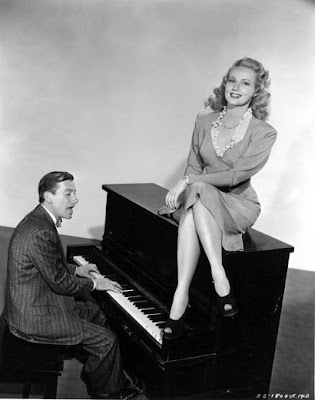 What is it about girls sitting on pianos? Is it the vibration of the notes transmitted up through their butts into their romantic hearts, making them sensual and pliable? Or is it by way of the piano, and through it, to the pianist, that the woman's ineffable influence is transmitted?
Hoagy Carmichael often seemed inspired by the romance implied by the presence of a beautiful woman, as he famously was, by Hollywood, which appropriated his sultry, suave persona to bring some lyrical titillation to the adaptation of Hemingway's To Have and Have Not [1944], the Bogart-Bacall vehicle which memorialized the talented couple's real life romance (they married a year later). Carmichael's all time classic, though, Stardust, is not about passion, but passion lost, seen through a rosy glass of nostalgia, its effortless strum of notes sliding up and down the keyboard like a string of perfect pearls. The song he and Bacall sang in the little Caribbean club which was the setting for the movie, was Am I Blue? It wasn't a tune Carmichael had written, but it could have been; Bacall's deep-throated rendition sounded almost butch (which is probably what made Bacall seem so soft-tough). 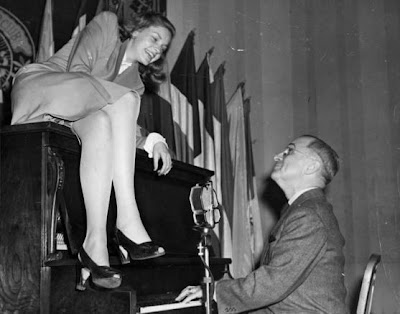 Or maybe, it's that with a lady sitting at eye level, you might hope to catch a better view of her legs. What could be more inspiring than that?, as Harry Truman gazes with rapt amazement at his accompanist in this National Press Club Canteen encounter from February 1945.
Stardust has been recorded by so many people, and rendered in so many versions, it's almost become our jazz National Anthem. This one by Dave Brubeck has a lovely streamlined sound, as if Alec Wilder were riding in a 1960 Caddy Convertible. And if you want a taste of Wilder, try Sinatra doing I'll Be Around--for my money probably the teariest of the Torchies. 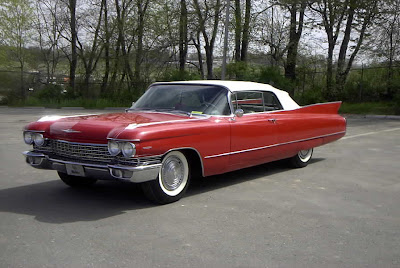 America's romance with the automobile also used to be associated with sex, though these days it all seems to be about danger and speed and incognito pizzazz. The radio was our conduit to the ancient heavenly connection to the starry dynamo in the machinery of night. Today you're lucky if you can navigate through the thicket of smash-mouth conservative talk and-in-your-face hip hop jive (what my wife and I refer to as "FOONK-cha music").
Carmichael was an Indiana kid, and his hybrid drawl seemed the perfect spin on the melding of country blues, up-river jazz and Tin Pan wit that became his signature style. His lyrics always seemed to sound better with a cigarette or a toothpick dangling from his lower lip, and the slow-world of Southern livin', tarnished dreams and forsaken romantic love was the perfect antidote to the Depression Era hardships which made everyone feel lost.
If easy-goingness were a commodity, you could sell it all day and never run out of the action; and that's what Carmichael seemed to capture in his melodies, all capitulation and small-town tinsel, sweet as maple hash. Hoagy once said he'd wasted his talent, because he had more music in him than he could exhaust, and considering his portfolio, that sounds plausible. Riverboat Shuffle, Washboard Blues, Georgia on My Mind, Rockin' Chair, Up a Lazy River, In the Still of the Night, The Nearness of You, Small Fry, Two Sleepy People, Skylark, Old Music Master, Ole Buttermilk Sky, In the Cool, Cool, Cool of the Evening, and the inimitable Hong Kong Blues. That happens in the same movie as the Bacall duet, which only goes to prove. . .well, what does it prove? That talent is where you find it, maybe. Certainly those were better days for American film and music, despite what we might like to think about our scintillating present. Hard times often produce good art, but the market is fickle. In a black and white world, things may seem simpler, and a good tune may save a dreary day, or maybe even a week.
But composing is a lonely craft, except for collaborating on lyrics. And for me, music has never been much of a social thing. I like to listen to music the old-fashioned way, just me and the record player (or CD player). Like Jon Carroll, I like the music to be "over there" while I'm sitting here. And I don't need to be waving my arms around or doing calisthenics to augment my appreciation. For me, music is the re-creation of an experience, an animated memory rewound on command, just for my pleasure. There's no top 20, or top 50, but the favorites make you breathe deeply. They're like memory's request song. That's my queue. 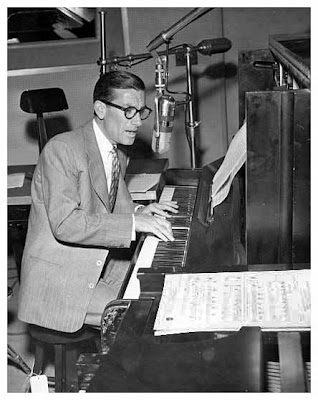 Stardust has been recorded by so many people, and rendered in so many versions, it's almost become our jazz National Anthem. This one by Dave Brubeck has a lovely streamlined sound, as if Alec Wilder were riding in a 1960 Caddy Convertible.

Brubeck's version might be the definitive Stardust--as least musically speaking.

Speaking of 50s jazz, did you hear the news of Kerouac's letter to Brando?

No "republican catholics" there but wild-eyed hipsters headin' into the American night.

Brubeck's version sounds very much of its time, an "updating" (with familiar Brubeck chord changes) of the original material. Many other arrangers and artists have been inspired to play with it, which is one of its strengths. The first time I heard it, with Carmichael singing the lyrics, it seemed excessively "romantic"--almost Victorian--in its poetic conceits. But it grows on you. The chords are jazz chords, and the pirouettes are awkward (like the National Anthem), and not easily enunciated.

How abstract can you make an interpretation and still have it be recognized? It's a question in far-out jazz.