Creeley's Away -- again and again then

Creeley's Away [1976] comes right at the end of his middle period, which begins with the publication of Pieces in 1968-69, continues with 1234567890 [1971], St. Martin's [1971], A Day Book [1972], Listen [1972], His Idea [1973], and Thirty Things [1974], and concludes with Hello [1976] and Presences [1976]. It was a time of convulsive change in American culture, as it was a time of change for Creeley himself, as his 20 year marriage to Bobbie Louise Hawkins ended that year. The deconstruction of his earlier style (in For Love [1962]), presaged in Words [1967], was complete, the process comprising a record of self-analysis and personal transformation, common to many artists of his generation during the period of the 1960's and '70's.
I've always been moved by a group of poems in Away, iconic works which signify for me the distillate of Creeley's thinking about consciousness, isolation, and the self-reflexive nature of the act of writing. Whereas the poems in St. Martin's, His Idea and Thirty Things seem like recreations or ironic conceptual takes, the poems in Away feel much closer to the bone, necessary invocations of perceptual disorientation and emotional dilemma. As the relationship with Bobbie wound down, there was an exhaustion, a clearing away of presumptions, of shared understandings, leaving him, for the first time perhaps, since the late 1940's, in a position of ultimate loneliness and clarity. It probably wasn't a happy time, but it produced some of his best poems. 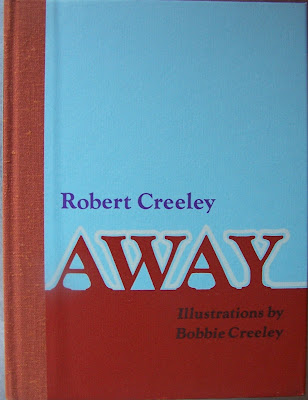 The ones I'm thinking of--the four quoted here--share a certain directness and coherence. The emptiness of the "room" of his life now echoes with a resonant attention, allowing him to focus on that isolation as a literal fact of perception.
SOUND
Hearing a car pass--
that insistent distance
from here to there,
sitting here.
Sunlight
shines through the green leaves,
patterns of light and dark,
shimmering.
But so quiet
now the car's gone,
sounds of myself smoking,
my head writing.
The grudging, methodical pressure of the advance of incremental perception, recorded in the simplest terms, is peaceful, but alienating. The emotional desperation of the loss of the Other, a respondent to the nervous, habitual process of speaking, marking event and observation with exaggerated calm, magnifies his emptiness. The subtly private noises, sound of breathing, scratch of pencil on paper, soft swish of automobile tires passing by in street, dappling of leaf-light through window, a measure of distance ("from here to there"), mind taking what's given, nothing left of it.
HERE
No one
else in the room
except you.
.
Mind's a form
of taking
it all.
.
And the room
opens
and closes.
The divisions of the poem's progress, marking the gradual movement of thought watching thought in a contraction of attention, to a vanishing point. The mind as room, opening, closing, measuring its dimension, as of eyes what's seen, of ears what's heard, fingers what's felt, the envelope of consciousness like a definition of what is. The unavoidable. What we're in.
FUNNY
Raining here
in little pieces
of rain.
Wet, brother,
behind the ears.
I love your hands.
And you too,
rain.
You insist on rain
because you are
no less than water,
no more than wet.
The starved self spontaneously conjures sensuality, rain the symbol of a consuming baptism of immersion in a larger "community" of feeling--is wishful thinking. Who is "the brother" we crave? A common humanity? A longed-for attachment.
OUT
Let me walk to you
backwards
down a long street.
.
Here is the rain again.
I hear it
in my ear here.
.
What fun
to be done
if not already
done.
.
We were going
out.
The reversal of intention implied by walking backwards (through time and space) to a place one had been before. But to what point? Like putting a question-mark at the end of a long sentence to emphasize the upturned tone of voice. And once again the rain chills the ear-lobe and returns the mind to its familiar body consciousness, the sphere of its own knowing, consumed by segments of task, worked across a distance, dropping markers. To accomplish what? Finally flipped over into departure, the sardonic flattening of potential, pulling the rug out from under, what fun. Ha ha. To be done with something that long, memorable, finally painful, hurtful, wasted, gone, dead.
Such clarity may be gruesomely intense--but yield up amazing sequences of apprehension. Which is where we came in. Inside these poems are voids of time and space, folded up time saved in little boxes of retention. They will stay there, and be there again, someday. Then we'll read them again, in that time.
Posted by Curtis Faville at 9:28 AM

But to what point?

Little or none, AFAICT. Cold, abstract...dull. I jus' don't perceive the genius in Cree, or most beat poets (Lamantia had some wild visions, howevah). In ...countercultural terms someone like Brautigan had a rather superior and copacetic vision IMHE. Or paraphrasing Duke El: it don't mean a thing if it ain't got that swing. :]

Maybe it's like what van Deren Coke said about black and white photography--"either you get it, or you don't."

For me, these poems make me feel like my brain is turning inside out.

Whereas Brautigan usually feels like a charlatan, or a salesman coining hip pitches.

Maybe there was some entertainment to BrautiganSpeak (in his writing as well as "poems"),and a bit of humor . Unlike Creeley--about as entertaining as like a funeral home director, CF.

If he were a comic poet, I suppose you'd say he was trivial, and not serious enough.

Actually there's a lot of humor in his earlier poems--in For Love.

Actually, Creeley was a miniaturist--as was Chopin--never could write a decent long piece, unless you count the Ballads--good stuff there.

Creeley would be the last poet in the world I'd say had any "bullshit" in the mix. He's all business--never a wasted word.