I was never much of an athlete as a child or teenager. But I made the high school baseball team, yet didn't letter. In my junior year, the coach emphasized winning, and played only the seniors. In my senior year, few of the previous year's players returned, so he instituted a "re-building" program, and played all the juniors. By year's end, I still hadn't gotten in enough innings to qualify for a letter, so I quit. Mr. Sugiyama, wherever you are, that's embittered me for almost fifty years. You did me wrong. Although I played a lot of "sand-lot" basketball, touch football, and some tennis, I was never very good at any of them. If I'd played on teams instead of pick-up hoops, I might have become a decent forward, but I never had any training. Serious basketball always seemed almost "violent" to me, a lot of struggling and shoving and blocking going on--so I tended not to feel comfortable at it.
One sport I did excel at was table-tennis, or ping-pong. We had a ping-pong table in the barn, and there was a lot of playing in the neighborhood. The next door neighbor, Mr. Parker, was a devotee, and pushed us all to compete harder. In those days, we all held the racket in the "Western" fashion--as a "handshake"--and the speed of play was relatively slow. Occasionally, we'd smash one, but in general we just tried to keep the opponent moving from side to side and back and forth, in order to force defensive errors. We served "illegally"--hiding the ball in our hand instead of tossing it in the air as the rules stipulate. I was pretty good, then, but not in a professional sense.
When I got to college, in the late 1960's, my first dormitory roommate was a skinny little guy, but he was a better player than I was, at least at first. When he washed out after his freshman semester, I traded roommates, and began to compete with other guys in the rec room under the cafeteria complex. These were Chinese boys, who'd come to America to study engineering. They were quiet, didn't speak much English, and kept pretty much to themselves. But they loved ping-pong, and they were very good at it. 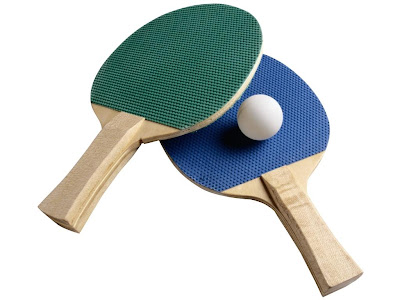 When I first tried playing against them, I was usually skunked 7-0. They were impatient with me, because I was an inferior player, held the paddle incorrectly (they held it in the correct manner, with the paddle pointing down from their fingers), and served illegally. But I was determined. I tried holding the paddle their way, and serving by tossing the ball up, but it was slow going. But I kept at it. By the second year, I was making strides. I'd still get beaten badly, 21-5, or 11-1, etc. But I was managing to keep the volleys going some, and I was increasing the "english" (or spins). Eventually I was able to put a little pressure on them. There were three guys who regularly played in the evenings, and one, a shorter fellow, who was the best.
One evening, he challenged me to a five game set. He beat me the first game 11-1, but I stayed with him in the second game, carrying a lead at match-point. We traded leads for five rounds, before I beat him with a wicked back-spin shot which twisted off the edge of his paddle. It was the first time I had ever beaten any of them, and it really surprised me. And them too. After than, I was more accepted, and we became friendlier with each other. I'd passed a test, and was allowed to be considered an equal on their turf. 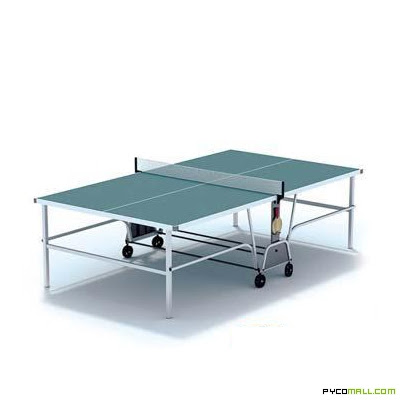 Years later, I bought a table for our family, and my son took it up. He probably had more potential than I ever had had. He had a natural finesse. He could juggle balls, was a hacky-sack champion, and a star little league pitcher. But he lacked determination, and didn't play after he left home in the late 1980's. The old table is still in our garage, folded up and covered with dust. My wife now has tunnel carpal syndrome from too much mousing (she's a software engineer). I tell her the best thing she could do would be to play a few rounds of ping-pong, but we never do. She used to be pretty good herself, though didn't like to move her feet very much.
Competitive ping-pong is not the casual diversion. You have to be fit, have lightning reflexes, excellent eyesight, and great manual dexterity. Things happen very fast. Once you get over the shock of the speed of play, you can concentrate on building a little subtlety into your shots. That's when it gets really fun. There have been attempts recently to change some aspects of the traditional game: Making the ball bigger, shortening the games by reducing the point totals, and the design of rackets keeps on changing. I remember when the pimpled rubber paddles came onto the market. They were expensive, but you could put a lot more english on the ball with them, than you could with the older "sand-paper" paddles.
At one point, I made a larger than normal sized paddle for myself out of ply-wood. This trick was tried by professional tennis players, a decade or two later. I'm not sure a larger paddle gives you any advantage, but it does increase the area of impact. I'm not sure what percentage of errors occurs as a result of edge-hits or sheer misses, but it can't be great.
Table-tennis is now a world class sport, and has been an Olympic competition since 1988. Unlike some contests, it's really more fun to play than to watch. I don't get much stimulation from watching good players, but put a paddle in my hand, and I'm in heaven.

1952 or 3 I won a doubles ping-pong tournament
at The Merrick Boys' Club... my partner was a young nun from the other side of the building which was for the girls and was called The Christ Child House


so
about a week or so after this tournament this priest
comes to visit my parents at the store and wanted to know
"which church do y'all attend?"

"we don't go doc church, we go to a synagogue"

"I never met any Jews before. My lord was Jewish!""

then he wanted to know why I went to the Boys Club..

"I have a crush on Sister XXXXX"

team sports is not much more than a tool for teaching warfare .... and how to "murder 'them' !

ping-pong, swimming, running, biking .... the way to stay
away from the Herd !

My dad was a sports instructor at the local college so I was born throwing baseballs, kicking soccer balls, playing badminton, etc. I was naturally good at all of these and always lettered in every sport I tried. They came easily, but I would have preferred to read and play board games. I did play ping pong with Asians at the U. of Washington but they weren't very good for some reason. These kids were from Macau. They invited me to play, and just couldn't play. It was like being with Jewish people who couldn't argue or hadn't read much.

Much more amazing was the badminton I played with Asians and Scandinavians. My dad was big on badminton and wrote a book on it. You can still find it but you have to dig. It's for kinesiology majors and has stuff about how to align your biceps and quadroceps when preparing to smash. I learned nothing from it.

At the U. of Washington I did play top Olympic athletes from Norway and China in Badminton and I know what you mean about getting better. At first I was lucky to get 15-1 (I had to try unbelievable dinks to try to get a point) but after two years I actually beat a German player.

However, I bragged about it, and no one liked me after that. I was still allowed to play, but only one Ethiopian guy ever liked me. This was because we played for five dollar bills and he'd spot me thirteen points and usually still win.

In Finland I was in a lot of tournaments. This is in my novel, Temping. I love badminton.

Racquet sports aren't taken as seriously here as they ought to be.

If I could delete one sport, it would be American football. Totally overrated. I do like the long bomb (I love the arc and the twirl of the ball as it goes 60 yrds. down the field) and don't mind the military aspects (we have to be fit to fight off the Chinese who are getting ready to invade).

It's just that I was always too small to play football. I weighed 90 pounds in ninth grade. I culd catch, but then I'd get hit by a 250 lb. goon and I'd be semi-conscious for minutes.

Now that women and men can play intercollegiate sports we are developing a new breed of hirmen.

I thought I knew how to play ping pong until I started school at U of Houston. The student union had a hall with about twenty tables. I was in the Honors Program and the office secretary was a recent graduate. She also played table tennis and had narrowly missed out on a slot on the Ping Pong Diplomacy team that went to China with Nixon.

I'd never seen a sponge paddle before or played anyone who used a pen grip. Consequently I had never seen a loop forehand. She could stand ten feet back from the table and return a slam with so much topspin that the bounce would go over your head. The only conceivable way to return it was in the first foot or two after the bounce.