Arthur Szyk (pronounced "shick") was one of the premier illustrator/illuminators of the 20th Century. The name doesn't ring a bell nowadays with the general public, because our cultural memory is about as short as the attention span of most people holding a TV clicker. I.e., about 15 seconds or less. I wouldn't have known about him myself if I hadn't happened upon a book at a library book sale, The New Order [New York: G.P. Putnam's Sons, 1941]. Just a quick glance through the book, which is comprised primarily of color and black and white "cartoon" illustrations, told me it was anti-fascist propaganda, devoted to harsh caricatures of German, Italian, Japanese and Russian political and military figures. 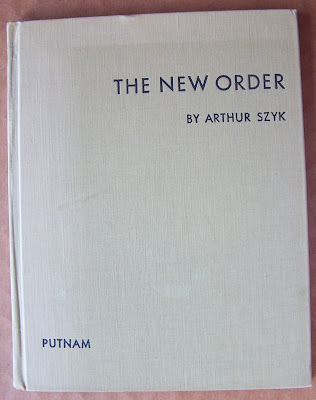 Political newspaper caricature is a dying art, perhaps because our periodical media are dying. Newspapers, magazines, posters--all the paper texts are giving way to electronic media--television, internet and movies. Cartoon art as such appears to be thriving, though in different formats: Manga and graphic narratives have wide appeal, apparently, though those seem to be concentrated within a slim segment of the youth market. 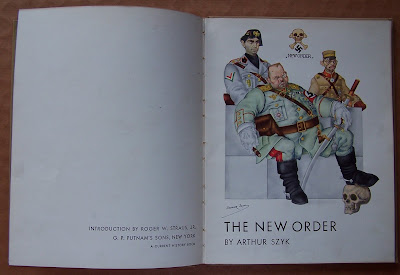 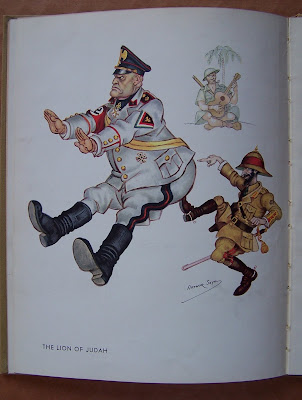 But political cartoons are a dying breed. Once upon a time, they exerted a powerful influence on the public consciousness, and artists could make respectable livings from them, mixed in with their other commercial work. Occasionally, a cartoonist might bridge the gap between commercial illustration, and pure art, or serious art. The former Abstract Expressionist Philip Guston, for instance, turned to crude symbolic cartoon imagery in the latter part of his career, and even was sometimes savagely political. 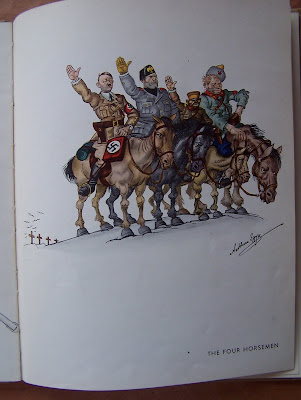 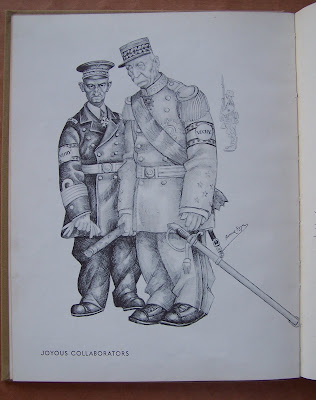 The cartoon artist/illustrator Arthur Szyk was born a Polish Jew in Lodz, Poland in 1894. An artistic prodigy, he got into trouble in school for his political views (anti-Czarist, pro-Zionist, pro-Polish sketches (my kind of guy!)). He was already studying art in Paris at age 15. As a Pole, Szyk was a Russian subject, and he was conscripted into the Russian Army during WWI, and served on the front lines, but managed to escape in 1915. In the Polish-Soviet war (1919-20), he served as artistic director of the Propaganda Department of the Polish army, and fought as a guerilla to defend Jews in his homeland. 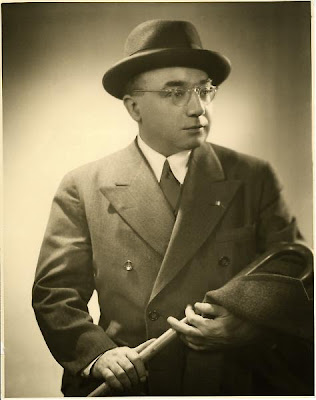 Artistically, Szyk was drawn to Medieval manuscript illumination, a style which influenced much of his later work. Intellectually, he had a rebellious turn of mind, and drew political caricatures while still a child. He was also committed to his Jewish identity, and even visited Palestine in 1914.
Szyk married and moved to Paris in 1921, where he was to live and work for the next 16 years, during which time, aside from his commercial work, he produced illustrations for Jewish Holy Books, and Jewish cultural exposés; and also remained devoted to Polish nationalist causes as well. He was even commissioned to create a series of 38 watercolor pictures about George Washington for the Library of Congress in 1930, for which he received a medal from the U.S. Government. It was during this time, as well, that he produced his magnum opus, an illuminated Haggadah, a familiar Jewish text that sets forth the order of the Passover Seder. It was published in London in 1940. In 1939, a selection of Szyk's paintings, illustrating the contribution of Poles to American history, was shown at the New York World's Fair. 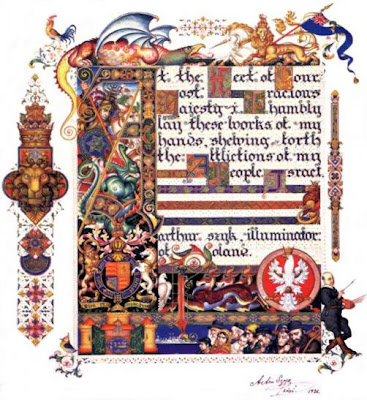 Szyk had produced anti-fascist cartoons and drawings in the 1930's, but these were not particularly well-received, as Britain had an official policy of appeasement at that point. It wasn't until after the outbreak of hostilities in 1939 in Europe that his work began to be used as anti-Axis propaganda in American periodicals. The book I've referenced, The New Order, was published just after Szyk arrived in America, in 1941. Szyk spent the war years in New York, turning out florid--or what some might call inflammatory--political propaganda against the German, Italian and Japanese fascist governments. These caricatures appeared throughout the American media, in magazines, newspapers, postcards, stamps, in religious and military publications, on posters. He also produced commercial illustration for Coca Cola and U.S. Steel, while showing his work in art galleries as well. Szyk was a one-man propaganda machine. Hitler even put a price on his head.
Looking at examples of these highly charged, and very politically incorrect images today, one is reminded of how partisan war propaganda can be. Nations typically build up negative sentiment about a political or military enemy as a prelude or rallying-cry to participation in armed conflict or to create support for hostile actions. It's much more difficult to engage in open warfare with another people or nation, unless you've already decided in your mind beforehand that they somehow "deserve" to suffer and die. 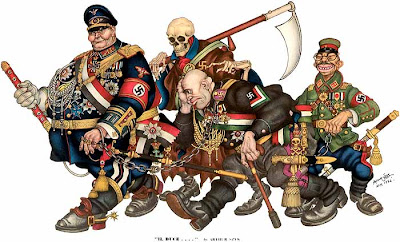 This is one of the ironies of the modern world--that we must summon up the most primitive emotions and sentiments to justify actions or policies which really have rational pretexts, even when it is precisely those emotional caricatures (or characterizations) of feelings about people that drive our pursuit of a better world. It has been expressed in many ways by many thinkers, that hatred and distrust are the obverse of mutual understanding and tolerance, but where hatred becomes institutionalized or hardens into folk myth and tradition, it's nearly impossible to deconstruct. After the war, Americans went to considerable lengths to resuscitate the devastated nations of Europe (the Marshall Plan). Germans and Italians and Austrians, who had once been our bitter enemies, now would be regarded as our partners in a new world of cooperation and reconstruction. 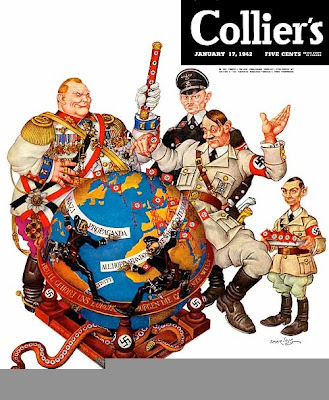 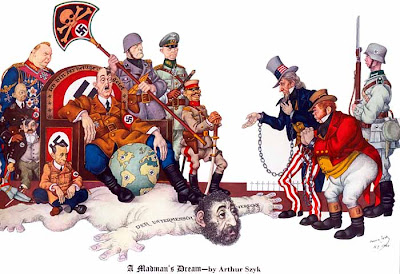 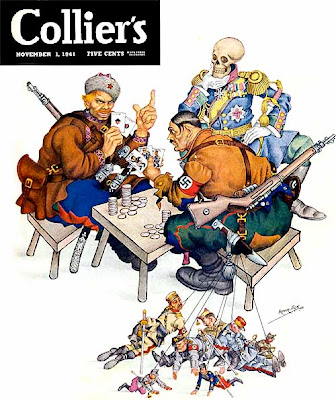 Szyk's style of illustration seems to belong to another time and place. But political cartooning is still a powerful tool, as the controversies in the Dutch media over anti-Muslim and anti-Zionist cartoons have shown. During the late 1940's, he continued his work of book illumination, and religious book illustration, and spent his last years in New Canaan, Connecticut, where he died in 1951. Ironically, Szyk was interrogated by the House Un-American Activities Committee, for his supposed left-leaning participation in anti-faschist organizations. 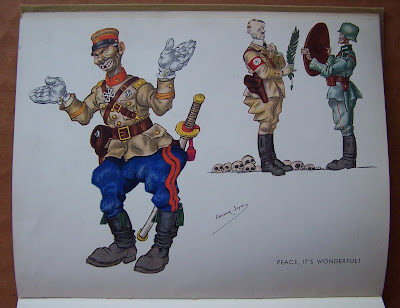 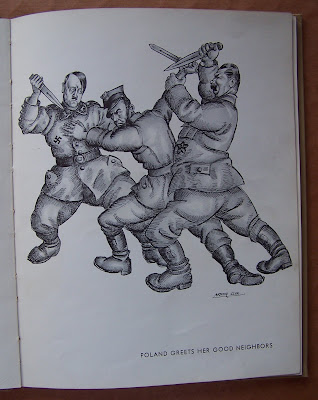 Szyk's reputation fell into decline for 40 years, but has recently been revived with a series of exhibitions in the United States. And there were even shows in Germany and Poland. Goodness knows what citizens of those countries today think of them. The changing tides of ideology and political convenience make strange bedfellows of us all. The world of Szyk's childhood was erased forever by the events of WWI, the suppression not just of Poland, but of all ethnic Jews, the rise of fascism, WWII, and then the early years of the Cold War. Szyk's political work had a political purpose. When that purpose was altered, he moved on. He was loyal to his commitments as he saw them, and gained great success and fame in his time as a result. He is honored today as an avatar of justice and freedom, but the means he employed was a pure skill, applicable to a range of motives. Nazi cartoonists undoubtedly had a field day with Churchill and Roosevelt and de Gaulle, and the images they made, however effective, or biased and bigoted, we don't appreciate today. Art and politics is a queer mixture, the fruits of which may swing both ways.
In my post of May 14th, 2011, I made the point that government has no business in supporting forms of art. "In fascistic, or monarchical, or communistic societies, artistic control is from the top down. In a democracy, in which the arts (and religion, and business) are intended to be separate from governance, there can be no official patronage." The question raised by the art of Arthur Szyk is pertinent to this issue. Can the purpose to which any political art is put be separated from the raw skill and ability of the artist's talent? Szyk apparently felt that art and politics are united in a common thread: "Art is not my aim, it is my means . . . I am but a Jew praying in art." Our tendency now is to regard such assertions as expedient. Certainly Szyk understood that how any artist chooses to employ his skills and abilities is a matter of context, not of pure ideology. If that were not so, then the underlying meaning of all art would dissolve in a hodge-podge of ephemeral distraction. We can look at great religious art of the Middle Ages today and appreciate its beauty and truth without accepting any of the precepts upon which its depiction of subject matter rests. The same criteria must be applied to all art.
Posted by Curtis Faville at 10:39 AM

Szyk drew the Reichmarshall with a certain flair eh --as in Goering, a protestant...and at least 1/4 jew hisself. Historically speaking Goering and Himmler often wielded as much power as Der Fuhrer (and made as many costly blunders, ie the Battle of Britain).
These days it's rare to find an "artist" who can draw even competent cartoons (Szyk, or R.Crumb)--Dilbert being the de facto norm