Reading the Anne Carson Interview in Paris Review No. 171, Fall 2004 this last weekend, I was moved to wonder, as I had in the past, just why her work has received so much favorable attention, and why so many people who should know better have been praising her work, and lionizing her as the feminist's answer to John Ashbery.
Perhaps it is her grounding in classical Greek literature. Tradition-bound critics and poets invariably admire writing which bears the stamp of classical literary tropes, even if (or when) it may be so unlike its putative models that it's unrecognizable in that context as literature at all. Classical fall-back is always the salve for anxiety about the new, especially when the work is so resistant to comprehension or explanation that even its Author is at a loss to account for it. Leavened with liberal doses of straight "translation" doesn't hurt either, particularly when it's of Euripides, Aeschylus, or Sappho.
What is it about Canadians that makes them so bland--so vanilla and inert and obtuse? I've always liked Roderick Haig-Brown (though he was born in Great Britain), but I can't think of any other Canadians who do it for me. I tried to like Margaret Atwood's poetry. No luck. I don't think of Leonard Cohen as a poet, but a song-writer who strayed out of his metier. I once heard Michael Ondaatje read a couple of interesting poems. Wiki lists about 650 names, but I've only heard of about eight of them. This is going to irritate lots of people, but it's a fact that most American readers are completely unaware of the vast majority of Canadian poets. We seem separated by an invisible wall at the border. When I've traveled to Canada, I've sensed a strong undercurrent of distrust, even of contempt, for America and Americans. I would like to believe that that's a misapprehension based on bad publicity, our confused foreign policy, or what the world thinks of us based on the art we export abroad. But I think it's also a symptom of a huge inferiority complex, which is almost racial in its intensity. Canadians have a "clean" country, things have a superficial sense of order, there's a kind of cottage industry of presumptuous propriety which they do nothing to conceal. "We're superior," they seem to be saying, "and if you don't like it, that's tough." The evidence for this supposed superiority being their refusal to succumb to the chaotic tendencies and excesses of their big blustery neighbor to the south. Or perhaps it's a lingering vanity that having once been part of the British Commonwealth, they're a tad more sophisticated than us obstreperous Colonials. 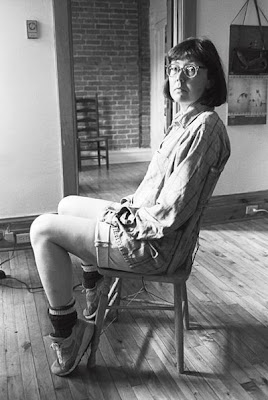 Carson makes a case for herself as a maladjusted teen and young adult. She describes herself as a cold fish, sexually ambiguous--perhaps even a-sexual--who developed an obsession for the Greek language while still in middle school. Like many of her contemporary academics, she's spent much of her adult life teaching in America. And her American audience--the audience for her work--seems better suited to the kind of writing she's published in her life--than her native country-folk. She's in that sense more "American" than Canadian, though those aspects of her character which are revealed in her work, seem more deeply Canadian.
Occasionally, one encounters the work of a writer whose impulse to abstraction and discontinuity is so primordial that one is left without any kind of mooring or guidepost even to attempt to describe it. The first fact to comprehend about Carson's work is that nearly all of it is based on Greek models, or tropes. Her fascination with the Greek language has led her to a lifelong attempt to understand ancient Greek civilization--its ways of thinking, its imagery, its worldview and religious iconography. All of these she imagines for herself in an eccentric way, freely incorporating details (both real and imagined) from her life, as well as surrealistic events and imagery, in such a way as to produce hybrid prose cribs as of some larger formal structure. The inadequacy of these fragments and disorganized sequences is excused with the claim that she neither has the interest nor the skill to make them more organized than they are, and that this disorganization embodies a vision of a sort of archeological incunabula, as if we could read her as we read Sappho, with a full knowledge of her incompleteness and fragmentary status. In addition, her defensive position with respect to feminist projections of history and meaning leads her into many peculiar gendered thematic dilemmas.
Adopting classical models is a very traditional choice. Writers have been translating and "adapting" Greek dramatic works and poems for centuries. Robinson Jeffers spent a good deal of his career either re-writing Greek drama, or trying to write new kinds of poetic-dramatic works based on vaguely contemporary subject-matter. Countless writers try their hand at adapting Homer--Christopher Logue comes to mind. Pope did the whole of the Iliad, and a major part of the Odyssey. But Carson, in her own work, is quite at odds with any literal use of Greek literature. In her own work, Greek literature is like a fantasy world, which bears aresemblance to accepted historical research and surmise, but which exists primarily to furnish her with a context and a pretext for the presentation of very abstract and difficult speculative meta-fictions. Again, none of this is new territory. John Gardner, for instance, used classical literary prototypes in his fictions. But Carson's employment of it is different in that she feels no obligation to historical accuracy or to artistic truth: Her post-modern license permits her to excuse any kind of excess, as if the difficulty and confusion her work projects were self-evidently finished and perfect. This notion of disjunct artifice has become tiresomely familiar to readers of post-Modern verse--as if the casual failure to make sense were somehow a victory over power and fate. It certainly may be a victory over common sense, when critics who should know better praise work which they can't interpret, either because its referents are so obscure that the work becomes opaque, or because they simply can't figure it out. Put up a persiflage of disconnected event, obscure reference, and clever disorganization, and you have the makings of a post-Modernist blockbuster. 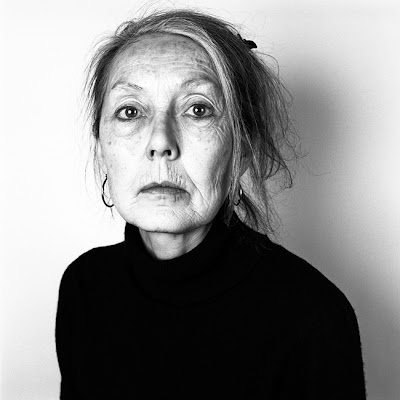 "What is it about Canadians that makes them so bland--so vanilla and inert and obtuse?"

I think I have the answer, Curtis: it's the Literacy by Bureaucracy system under which people write and publish. Ours is a 'nanny state' in which entitlement trumps quality and real innovativeness. Carson like Karen Houle, Christian Bok, Frank Davey, etc etc and the rest of the academic-poets can't really look beyond a few catch-phrases culled from their own specialities. Without their lecture notes--and generous Canada Council grants!-- they'd have nothing to say.

The last time anything interesting happened in literary Canada (the Simon Fraser 'Tish' movement) the Americans were largely responsible for it. I too find mainstream Canadian writers a generally lethargic and uninteresting bunch who don't have the stomach for real literary discussion. It's why about 95% of my own online correspondences are with the Americans. I can't think of a single Canadian writer who's commanded the same respect and audience appeal as, e.g. Ron Silliman. Not one.

Good post, Curtis: your honesty's refreshing. I'd almost hope for reactions from the Canadians but, well--as you say--they just seem too bland for it.

And we are to take the "awareness" of American readers as some kind of guide to literary value? Give me a break....

Nevertheless you are right about Carson. She's an anemic bore and not at all representative of the best in Canadian poetry. The answer to Ashbery? As if Ashbery could inspire an answer....

Of course my remark had nothing in it of specific praise or repudiation. Merely a confession of ignorance, not just for me, but for my countrymen.

I once cosidered emigrating, but thought better of it. Are clean sidewalks worth 60 inches of rain? Wrong question.

bpNichol's someone I've thought to look up, but whose books we rarely see down here. In the 1970's, a few Coach House books turned up, but nothing these days.

I definitely did not see what was supposed to be so hot about Atwood--never have.

If you think this post was bad, read the next one--I'll lose readers by the bushell-full, if I ever had readers in the first place. Oh well, have to get these things off one's chest.

Did I forget to mention Robertson Davies? Crucial omission!