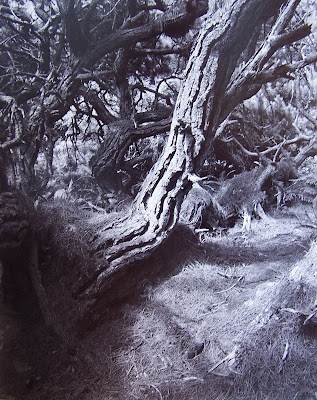 Mendocino Coast 1986 [Silver Gelatin Print, 8x10 Contact Print]
In the 19th Century, Romantic poets idolized Nature (with a capital N), thinking to invest it with generative and salubrious meanings for humankind. The Industrial Revolution set man at odds with nature, as scientific advances promised an actual perfection of human life through the taming and subduing of a raw cosmos. But science also brought destruction, and the deeper apprehensions of our real place in the universal scheme, one in which we were but one minute piece in a gigantic puzzle, beyond our ability to control or even to comprehend. And the production system was dehumanizing, putting man into a subsidiary position with respect to work, and the fruits of labor.
An idealized Nature has been at the heart of a number of pantheistic visions of the world, and of man's place in it. In the East as in the West, men of discernment have sought to find in a steady, careful observation and consideration of natural phenomena, a consoling interconnection between our higher mental faculties, and the diversity and persistence, the fragility and strength, the mystery and simplicity, and the complexity and unpredictability of the natural world. Nature was the expression of primary structure and force. But our sense of it, beyond the intuitive, was limited by our ability to codify our understanding through language, and to find adequate means to synthesize and summarize our knowledge. Higher kinds of language, such as mathematics and symbolic logic, might provide more accurate versions, but tended towards the formulaic. Formulae are human shorthand models of principle, and can be so difficult to understand that the real audience for them is tiny.
On the intuitive level, where our complex brains perceive and comprehend phenomena on a non-rational or supra-rational platform, language fails completely to provide us with a handle on our sensations. Brain research suggests that our consciousness is a very complex affair in which the suspended self is surrounded by millions of impressions and memories and incoming flows of data, constantly in flux and continuously adjusting to influences of many different kinds. In other words, being in our brains, which is literally where human consciousness resides (in a body), constitutes an (internal) environment at least as complicated as anything we "perceive" in the "external world." The mind is an analogue for the world's density and buzz, which is what enables us to sense its mysterious qualities.
I'm not religious, but what religion habitually attempts to address is, at least in principle, the same problems faced by higher physics and mathematics. Organized religion often serves the purpose of providing less curious and inquiring minds with convenient forms of universal definition, since the average person has neither the need nor the desire to know more about the meaning of life beyond a few simple prayers (or mantras), and a consolation for death and suffering.
Nature by and large isn't comforting and helpful, as the Romantics liked to imagine. It's cold, and empty, and immense, and filled with danger and competing agency. Life perseveres in its various manifestations through aggression, defense, and busy reproduction. One may assign happy significances to bravery, careful planning, and love, but these fictions beg the case.
Light falling on a gnarled trunk in a quiet corner of a coastal forest on a sunny day in Spring may suggest in its quotidian aspect a restfulness and inviting shelter, but all of the forces which determine the formal unfolding of time, of life evolving and subsisting, are present, because those principles apply everywhere. Man isn't separate from nature, though he may like to believe that at times. We can construct a sense of our custodial husbandry of the natural world, based on an altruistic vision of a perfectible human paradise. But that's not what ecology, as a purposeful pursuit, reveals. Responsible attitudes toward the environment are mediations between what is, and what ought to be.
Nature once seemed limitless and foreboding. We now find that that sense of it, a provisional reaction in the face of its extent and power, may have been truer than the one we now pretend, of having superior leverage over the natural world. No matter how efficient our manipulations, no matter how far our understanding of the universe may penetrate, we're still dwarfed by its larger significance. Acceptance and capitulation may be spiritually convenient, but they're only makeshift strategies.
We still have to get up in the morning and hunt for a meal, if only by opening the icebox. The universe itself is one very big icebox, just how big we don't really know. 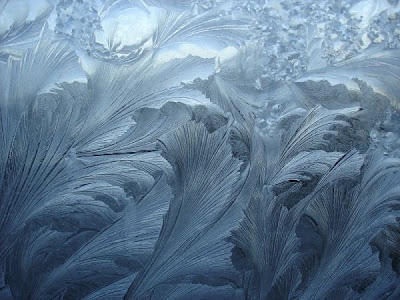 "[O]ur brain, which is literally where human consciousness resides..."

Well, I have an alternative proposition, put forward here. In a nutshell: "The idea that no creature possesses consciousness. There is only an ability to process and display consciousness. We receive consciousness the way radios receive signals: how well we receive it depends on how finely tuned we are organically; the same with how well we display it." As a poet, this explains (for me) the sense I often have when writing that the poem is arriving from the outside. Not from an angel, not from Mars, but just maybe from a dimension of Nature itself. No deity required, needless to say....

I was actually thinking some about Jack Spicer when I was writing this. Spicer, as you may know, believed in some version of the divine inspiration (external) as an explanation for poetic creativity.

I wouldn't disagree about the possibility of what you describe. What are brains, after all, but ganglia of the universal afflatus concentrated in a small space? Brains "interpret" the universe by explaining itself to itself. I sort of said that--"the mind is an analogue for the world's density and buzz, which is what enables us to sense its mysterious qualities."

Scale is relative too. We don't know how "big" we are in relation to anything. We can see bigness, but smallness is more elusive. Are there universes at the sub-particle level? We can only guess. How can we measure time? How long is an hour, if you take away the sun and the moon. What can we use to measure it?