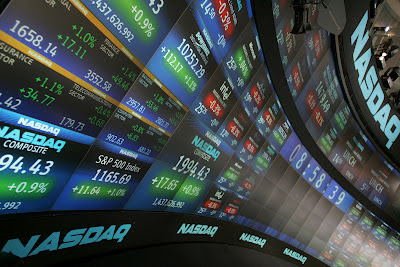 Capitalism is an amazing idea. That people could create wealth by raising capital as investment to tap into the common economic power of society, and bring about enhancements of the quality of human life. It's really a 19th century idea by now, of course, since the sophistications of the manipulation of paper have become so baroque that the simplicity of the original model is too ornate to have much concrete significance.
But initial public offerings still appear to possess the kind of purity of capitalist drive we like to think demonstrates the true entrepreneurial spirit. And occasionally, the public does get to share in the premium of value which accompanies a successful corporate venture.
Yet too often in our present anxious investment environment, the excitement we associate with a promising venture is nothing more than manufactured hype, foisted off on a public looking desperately for fast, easy gains.
Today's Facebook IPO was listed at $38.00, opened at $42.05, then fell back to earth at the close (finishing at $38.23). The word on the Street was that its underwriters had had to buy back shares to prevent its initial guaranteed price from falling below the original ask. Pretty embarrassing for one of the most highly touted offerings in market history.
The problem, of course, is that despite Facebook's huge worldwide pull, there don't seem to be any clever ideas about how the site can actually generate cash. The internet is an amazing venue, and some retail promotion has developed, such as Amazon and e.Bay. But if the only way of "selling" air (or web-) time is to rent access, or to interface advertising copy between users and their activity, there's serious doubt about how capital can be generated. And that means that exaggerated projections about Facebook's profitability may have been oversold to a skeptical investment community. Personally, I wasn't motivated to participate, especially given the market's vulnerability at this point in history, with European banks teetering on the edge of crisis, and America's Federal deficit reaching critical mass.
Can the kids figure out a way to turn hand-helds into money machines? It remains to be seen. We've seen how internet (or "Dot Com) capital ventures have foundered on dreamy predictions of a paradise of synergistic interactivity in which all our business is transacted on the vast stream of electronic data. But creating wealth out of energy impulses which is run on a largely free access float is proving to be a challenge. We all want the internet to be free and unfettered, but if corporations have their way, that may change soon.
In any case, in the spirit of hope and progress and change, here is a new concoction from behind the mahogany counter. Here's wealth and prosperity and a brighter future for us all.
As usual, this recipe is by proportion:
4 parts Tanqueray No 10
1 part Creme de Violette
1 part Parfait d'Amour
1 dash tangerine zest
Juice of one wedge of fresh lemon
Shaken and served up in a chilled cocktail glass. No garnish.
_________________
Note: The Compass Rose blog will be silent for the next 10 days while I segue over to the Owens Valley, on the Eastern side of the Sierra Nevada Mountains, to do a little fly-fishing, at Hot Creek, the Owens River, and perhaps the Walker (over the border in Nevada). Wish me luck!
Posted by Curtis Faville at 9:08 PM

Happy Travels and Good Luck! Just back from a vacation to Virginia and North Carolina myself, I highly encourage everyone to indulge in the refreshing experience of a vacation. National parks and beautiful gardens, forests, rivers and farms inspire deeper breathing and clearer thinking. Have a great time!

and here's to one more (probably) over exuberant dot.com bubble. I love the enthusiasm of the young but hate to see them "crash", again.

Nice
I love your adjective usage :)
hope you had a great vacation!