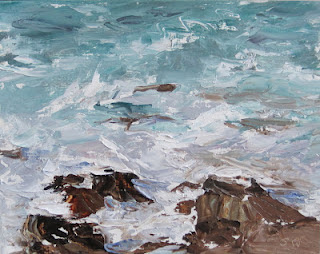 Ocean Waters in Rockport
My old friend from high school, Sunny (Hindes) West, who lives in Ipswich, Massachusetts, is a plein air painter who maintains a website here, recently posted her latest effort above, accompanied by the following comment: "I especially love the colors and excitement where ocean waters reach the rocks on shore. I tried to capture that energy and excitement by painting this scene loosely with thick paint from a palette knife."
Jeux de vagues ("play of waves") is the name given to the second movement of Claude Debussy's symphonic poem La Mer [1905], a work which might be called, or considered to be, a true three movement symphony in the 19th Century sense, but for the fact that the early Impressionists (of whom Debussy is undoubtedly the preeminent figure, in music) were at least as interested in "programmatic" applications, as they were in "pure" music conceptions.
As Sunny says, the "excitement and energy" of the collision of water and shore produces wondrous, expressive images. In photography, this involves not the construction of moments of such excitement, but timing and calculation. Waves, and the spray and thrust of water, occur quickly, boisterously. A photographer has to be ready. The moment you click the shutter is a combination of anticipation and exact timing, and you usually don't get a second chance. No wave is ever precisely the same, though certain points of impact may be potentially promising.
The photograph below was taken at Point Reyes National Seashore Park, beside McClure's Beach, in 1986, with a 4x5 camera using Tri-X film [320 ISO]. The tumultuous flux which occurs here offers dozens of different possible angles and views. What especially appealed to me about this vantage was the replication of rocky diagonals creating dramatic V-shapes, which, contrasted against the impetuous, effervescent foam, criss-crossing wave-currents, pull the eye forward and back and across the composition. In the distance, a wave crashes against a big protruding boulder, as the wet hiss of receding water distracts you at your very feet. I'd had to climb up gingerly to a vantage that barely permitted the placement of my wooden tripod with steel spiked points. Spray and mist dampened the dark-cloth and my camera bag. I stood there with my camera pointed and adjusted for near and far focus for several minutes, watching the play of the waves, and gauging the interaction between the sequence of great and small wave actions. (As a footnote, this is the same thing that occurs in the movie Papillon [1973], where the hero, played by Steve McQueen, who has been exiled to a small island with no access to the shore (only high rocky cliffs), "times" the pattern of waves in a narrow inlet, in order to learn the precise moment to leap into the surf with a coconut raft, to swim to freedom.) 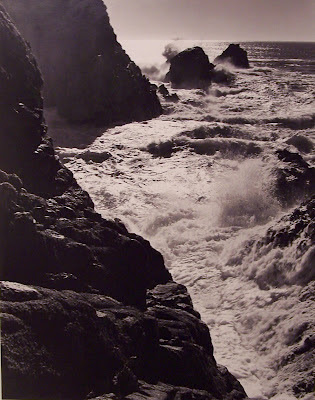 I waited for the moment when the big wave impacted the forward positioned rocks, and pushed the shutter cable. I wouldn't know, of course, whether or not I'd gotten it just right until I'd developed the negative back in the darkroom. (Today's digital cameras, of course, provide "previews" within seconds of an exposure, giving the user immediate feedback, something which was impossible, with the old organic chemistry processes. Has this made taking such photographs easier, or more reliable?)
The manipulation of subject, and image composition, seemingly gives painters a tremendous advantage over photographers in action scenes, who are limited by the "real" event. But painters also have the challenge of determining how "realistic" their portrayal of such pictures will be. It's possible to make paintings which challenge our ability to know whether or not they're photographs or paintings; but taking the exactitude of representation to that degree seems to beg the very question posed by photography. The new digital technologies, as well, which allow the manipulation of images--both photographic and non-photographic--makes both kinds of image-making more ambiguous than ever before. Making things look other than they really do--or did, in reality--may be a useful and valuable option, but it also has the probable effect of devaluing the skills (or limitations) associated with the crafts of painting, and photography as well. Photography, invented in the 19th Century, and refined over the last century, has had the intermediate effect of devaluing mere verisimilitude. Making recognizable images of reality as a skill or tool has been aesthetically demoted, though it is no easier to accomplish such effects than it ever was. Of course, the ability to make a great portrait, for instance, on a level with Raphael or Da Vinci or Tintoretto, would still be considered an impressive elaboration of genius; and the loss of the motivation for artists to perform this feat, may be one of the casualties of technology and scientific advance. The progress of civilization opens new doors as it closes others.
The debate over the alternate values of two-dimensional representations of reality is an old question, but it isn't settled yet. I've never felt the desire to paint, but part of my Landscape Architecture degree program included a free-hand drawing course, in which I explored line-drawing as a medium, making pictures of buildings, flora, and other kinds of objects (chairs, shoes, etc.). This was an exercise designed to sensitize one's eye to the visual aspects of a scene, and to see the relationship between the perception, and the manipulation, of a space. Copying shapes and textures is a discipline which every representational artist must master, at least to a certain degree. Creative representation, of course, stretches the meaning of reasonable recognition well beyond this simplistic definition. Modern and Post-Modern artistic movements have taken aesthetic arguments well beyond the dialectic of the reportage or documentation versus artistic license. The natural world is no less fascinating to our eyes than it ever was to the ancient Greeks, or to the great Renaissance painters. But the uses we may choose to make of it now feel much more various, and complex, than they may have seemed to those earlier epochs. Our knowledge of the intricate and mysterious workings of matter and perception are many times more profound than they once were; but the means of our mediation between the "external world" and how it is perceived by the human mind have changed, and will continue to change over time.
Posted by Curtis Faville at 11:48 AM

thanks for the link to Sunny's site. Her paintings are wonderful: as you'd agree, refreshing to the eye tired with all the fake digital 'simulacra'. I believe the modern eye's been blunted by technology (gone the "aura" for good).Your "Point Reyes" is magnificent.

I envy painters and photographers: two art forms I've never had a chance to pursue.