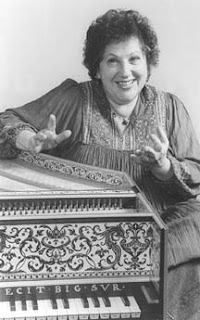 Laurette Goldberg a long time ago

I couldn't have been more than 15 when I first heard Laurette Goldberg perform. A family friend was managing a little coffee-house on Shattuck Avenue in Berkeley, across the street from Mel's Cafeteria, called The Florentine. The Florentine was about as hip as you could get in those days, which would have been in the early 1960's. The smart and the sophisticated rubbed shoulders with the young kids playing hooky from the straight world, and on any given evening, you could listen to Laurette Goldberg knocking out some Bach or Scarlatti, squeezed into the back corner of the place, tinkling above the murmur of talk and clinking dishes at the counter. (The Florentine and Mel's are long gone, but the memories of that time live on in my imagination.) 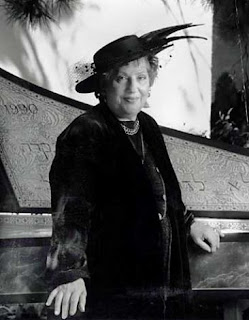 
I was no stranger to this kind of music, having taken up classical music a couple of years earlier, when my little transistor radio had some juice in it (I would lie in bed at night listening through the little earpiece, so I wouldn't disturb my parents--shades of the future!). Later that same week--or was it a few months later?--I got to visit Laurette at her house in Oakland (or was it Berkeley?), to hear her play under more controlled conditions. Laurette was a tiny woman, clearly overweight, but bubbling with energy and enthusiasm for music, for performance, for the harpsichord, and for Bach and Scarlatti and Soler etc. Once, just a few years ago, I met Laurette in front of a residence along upper Marin Avenue in Berkeley, a place that she'd arranged to dedicate to holding musical events. She had lost a lot of weight, and looked a little tired, but she'd lost none of her spirit. I don't think she remembered me, but she did remember my family friend and the good old days at The Florentine.

I thought then, back in the 'Sixties, still a high school student, that playing a harpsichord was just the neatest thing I could imagine doing. Later, when I had the opportunity to try playing on one, I discovered its limitations, and the difficulties it presented. In the history of keyboard music, the harpsichord preceded the piano, and composers for it conceived works that exploited (explored) the potentialities of that instrument, not realizing that one day they would be played on a much grander and more elaborate instrument (the piano). Playing (and hearing) pieces from the harpsichord era played on "original instruments" (or built to mimic them) is an especial treat, because you get to experience what that period felt like.

We don't know, of course, precisely how they may have played them, because nothing from that period was recorded; and that would be true all the way up to the invention of the phonograph. Electronics had to wait another century and a half to be invented (Bach and Scarlatti both lived roughly during the same period--early 18th century), before we could begin to "save" the performance. 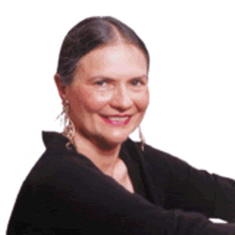 While Goldberg was a pioneer of sorts, her way had been blazed by others. Wanda Landowska, for instance, and Ralph Kirkpatrick. Surfing around on YouTube last week, I discovered the harpsichord's new master and sponsor of the instrument, Elaine Comparone. Comparone has by now had a distinguished career as a classical performer, but I didn't know about her until now.  She had a special stand built for her harpsichord, which enables her to perform standing up! This may seem odd. I once read Vladimir Nabokov's account of how he wrote his books: He had a stand-up desk, and he wrote out the outlines of his novels on little 3x5 notecards, which he kept in little shoe-box files, expanding his narrative outward from these fragments and notes. He said he would do this in the morning "until gravity began to nibble at [his] calves," and he'd knock off for lunch, or an excursion to look for interesting butterflies (Nabokov, as everyone knows, was a lepidopterist). Anyway, here's Comparone playing Scarlatti's Sonata in D minor [Kirkpatrick 517] on her stand-up harpsichord, with a double (reverse color) keyboard.

Here is a picture of a stand-up keyboard. This is not the one you see her playing in the YouTube video above, but it's very similar. 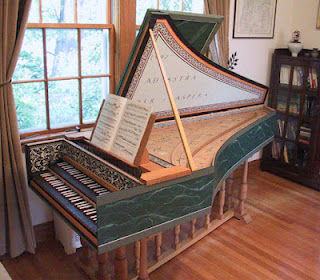 I don't know quite what it is with the harpsichord, why it's so satisfying. Its sound was obviously derived from senses of the lute, and other stringed instruments, though the player lost the ability to moderate the string-sound, once the strings were put inside the sounding-box behind the keyboard. A harpsichord plucks the strings, as opposed to the piano (or pianoforte or grand piano) where are struck by little hammers. Once a key is depressed on the harpsichord, all the player's control over the sound made is complete. You can't control the intensity or the duration of the vibration, which functions every time in its limited way. Some harpsichords can be "dampened" to create a sound that is almost identical to the medieval lute (hence, the "lute" control-setting on a harpsichord). The harpsichord makes what you might call a "twinkling" sound, delicate and spine-y. But with larger harpsichords, especially, when you play big chords, you can create a considerable "wall" of sound that can be very effective and powerful. Also, playing very rapid series of notes (as with fast runs) you don't have the problem of blurring that can occur with pianos. The individual notes of a harpsichord stay separate and clean, without the "wash" of mixed notes you sometimes get with big romantic keyboard pieces created on the grand (modern) piano. Also, the harpsichord, because of its finer, more subtle sound, is more suited to certain combinations of instruments than the piano is. Concerts nowadays are frequently made out of wholly "period" instruments. The development of musical instruments over time has led to the formal traditions that govern any particular epoch. The big classical orchestra, for instance, was unknown in the time of Bach. By the end of the 19th Century, composers could create big symphonic works for orchestras with over a hundred players, capable imposing gigantic tsunamis of sound.

Perhaps it's the antique flavor of the instrument that gives it much of its charm. It seems suitable to a small living room, rather than a huge concert hall. Important concerto works for the harpsichord are fairly uncommon. Two of my favorites are those by Poulenc and de Falla. There's always the question of how much amplification to devote to the harpsichord, against the context of a full set of instruments. One recording of de Falla's which I bought many years ago, probably has a separate microphone right inside the body of the instrument, which makes the harpsichord part sound like it's in an echoing hall. Since that was the first recording of the work I'd ever heard, I've always tended to think in terms of that version, instead of the more balanced ones I heard later. (I think that's a common tendency among listeners.)

Here's Comparone playing Couperain's "Les Baricades Misterieuses." And here's her version of Scarlatti's Sonata in C minor [Kirkpatrick 48 L 157].  And here are four more for your delectation. If you don't like the harpsichord, or even if (poor soul) you don't like Scarlatti or Bach, then bully for you. Was there ever an artist more perfectly suited to his medium than Scarlatti? Hard to imagine.

Playing a harpsichord is a lot different than playing a piano. The depression is like a click or thump on a harpsichord, whereas on a piano it's like a kind of sponge, with a range of touch. You could even make the case that playing a harpsichord is easier, though when actually performing, there are few harpsichord masters who would be likely to accept that judgment. It's such a noble instrument, with such a distinctive quality. I've always felt that it ennobles one in the listening. Some people don't like to feel uplifted by music. I think, for instance, that a lot jazz is intended to put you into a kind of laid-back trance of decadent languor. Not a bad thing, but not all the time.

Handel is another composer who always seems to be trying to raise your moral bar. Ostensibly, he has a religious purpose in doing this, but he also wrote secular pieces of great joy and dignity. Is Handel a composer for the "upper classes"? That could be argued. Pomp and circumstance, and the ultimate refinement money and power may impart. But to feel proud or inspired or enthralled by love of something or someone isn't limited to those with means, though our access to art and the better things of life can literally limit our appreciation of the world. Gratefully, few people today are completely closed-off from the appreciation of music, no matter what kind. Millions of recordings have been made of every kind of music there is. We live inside this richness, but we hardly appreciate it. It's now a commonplace, but once upon a time it was completely non-existent.

Rusting away out in our rusty Mexican gazebo, toward the mulberry tree, is a small round table liberated from The Florentine when it went out of business, back in the early 1970s I think.

I fondly remember Laurette from those days, and from more recently when as you say she ran the HIP music center — Historically Informed Performance, that stood for, as well as "hip" — on Marin Avenue. She asked Lindsey to give a talk there once or twice, about Chez Panisse and pastry. She did love her pastries, Laurette did.

Somewhere around here I have several aging cardboard boxes with the necessities for building a harpsichord distributed among them. One of these days, perhaps, I'll try my hand at instrument-making…

At one time, virginals and harpsichords WERE played while standing up! We see this for example, in 17th century Dutch paintings, which also depict people playing while seated. Must have been a transitional period. Ten to one, "lower" instrument stands at this time were made on "special order" only, and were desiganted "non-returnable". My goal is to be able to play my harpsichord while lying down. As the old television show, "Fernwood Tonight" once featured a man playing a piano while lying on his back in a 1950's Iron Lung, there's hope yet! (Love the fact that the words that I must type below to prove that I'm not a robot are "lie more".