Cuban pianist and composer Ernesto Lecuona's [1895-1963, of Basque descent] work is well-recognized around the world, in large measure due to the success of his very popular keyboard piece Malaguena. Beginning as a child prodigy, he was already composing pieces as a young teenager. He played piano in silent-movie houses to help out his family, and was giving concerts in Europe by the the early 'Twenties.

Lecuona would go on to compose hundreds of concert and popular pieces based on Cuban inspirations. Two keyboard suites, the Danzas Cubanas, and the Danzas Afro-Cubanas, are particularly pure and concise expressions of his style, which derives from the earlier work of Albeniz, Granados--though there are caribbean flavors swirled into the mix.

Central and South American composers inevitably fall within the Hispanic musical tradition. In the Caribbean, you have African and nativist qualities (of jazz and latin dance music) as well, all of which contribute to the special character of Cuban music, which Lecuona absorbed and incorporated into his work. 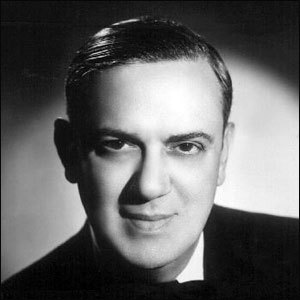 Lecuona was unsympathetic to the Castro revolution of 1960, and emigrated to the United States, where he lived (in Florida) until he died in 1963. His will specifies that his remains are to be returned to Cuba once the Communist regime has run its course.

As an interested amateur, I acquired the sheet music for Danzas Afro-Cubanas before I ever heard it played. The pieces are of medium difficulty, though the easier ones can be played with a little practice. Their catchy rhythms and lulling melodies are seductive and exotic. Here is a version of the whole suite played Cristiana Pegoraro on YouTube. 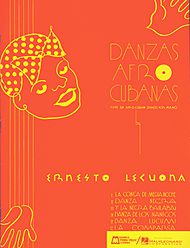 The Andalucia Suite, which includes Malaguena, is probably his best known music, aside from the romantic theme music Siempre en mi corazon ("Always in my Heart") played by Thomas Tirino, in Miami 2003.

In the popular imagination Lecuona is probably regarded as a cheap compromise between the seriousness of European classicism, and the dance-hall styles which predominated in the pre-revolutionary Cuba of his youth. But it is impossible to listen to the pieces in his two piano suites without acknowledging that he aspired to a higher mimetic. In America, the only wholly homegrown cultural expression is considered to be jazz. We inherited the serious music of 19th Century Europe, just as South and Central America did (though to a much lesses extent) They developed their own folk and popular music tradition, and then imported American jazz as well.

In the American popular imagination, you have Carmen Miranda and Xavier Cugat and even Desi Arnaz churning out sad clichés on the Latin rhythm theme. But Lecuona represents the more serious side of Latin culture, which traces its roots all the way back to Moorish Spain. There's a curious melding of that strain with the island, jungle and primitivistic tropes, which can be heard in Villa-Lobos or Ponce. Lecuona essayed more ambitious forms, but perhaps with less obvious success. Here is his Rapsodia Cubana for piano and orchestra; it's swishy soft romanticism suggests the same kind of pop conciliation I refer to above. Lecuona was capable of adapting himself to many different styles, as in this version of "Two Hearts that Pass in the Night," which sounds like a soft jazzed-up supper club chestnut.

The Suite Andalucia, which is modeled after Albeniz's Suite Espanola [1887], and Granados's 12 Spanish Dances, can be heard piecemeal, played here by Thomas Torino on YouTube:

These pieces are historical-regional evocations in exactly the same way that the Albeniz and Granados suites are. And they go a long way towards a convincing demonstration of how well the Cuban had absorbed his masters' skill. Lecuona's music is more dance-inspired, and has a little less of the dignified austerity of Castille, but the Moorish influence is unmistakeable. 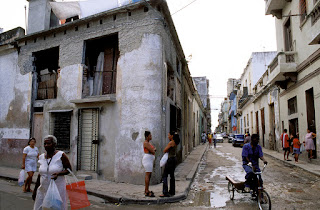 Despite what you think of Castro's Revolution, and the fifty year regime in Cuba, it goes without saying that the cultural life of that nation has stagnated. Poverty and mind-control are the enemies of creativity. Decay may seem picturesque, or nostalgically pre-post-modern, but the daily reality is not romantic. Should the U.S. have lifted its embargo on Cuba years ago? Would that have constituted some kind of capitulation, or a de facto acknowledgment of the sovereignty of a failed Communist state in our midst? 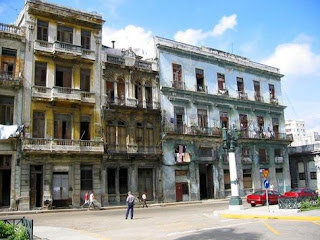 I've never been to Cuba, so I can't speak to its current mood. From all accounts, it's a tired place, a hollowed-out shell. It remains to be seen what will happen when Castro finally expires. Will it trudge on into a shabby socialist "future" or throw in the towel and welcome back the business-community? We've seen how fast third world countries can rebound, once the repression and restrictions on growth are lifted. Ironically, its economic stagnation has allowed much of the island to remain unspoiled, and there are many now who believe that a rapid return to the tourism and rigid social stratification of the pre-1960 days would be no better for its people than the strangling oppression of its failed experiment in collectivism.

Classical, or "serious" music, thrives in an atmosphere of some prosperity. Until the middle of the 20th Century, it was the province largely of the rich and privileged, who could afford the instruments and performance spaces and could support professional musicians. It was patronage-driven. The explosion of media in the last century brought it to anyone, though its appeal was still marginal beside the great appeal of popular new generic styles. Lecuona represents a cultural milieu that died in 1960, at least in Cuba. He was a man of his time, and he worked within the prevalent traditions available to him. Had he been born in Spain, his career might have been somewhat different, but perhaps not so much. And yet we'd have missed the lovely works he did make. Great political convulsions cause equivalent changes in the arts. The Pre-revolutionist Russian musical scene was basically disbanded after WWI. The few remaining talents like Prokofiev and Shostakovich had to suffer through repeated indignities and routinely harsh censorship.

Lecuona, like many of his countryman, emigrated to the U.S., living in artistic exile. But his work survives. And it speaks to us today, not of revolutions and hardships and conflict, but of love and joy and gently nostalgic reminiscence.