Einstein on the Beach 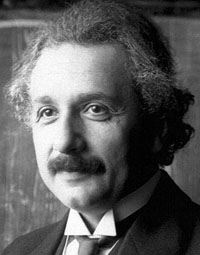 There is presently on e.Bay--the familiar web-based online auction site--an auction in progress for an original ALS (Autographed letter signed) by Albert Einstein, written by him (in German) in 1954, just a few months before his death (in 1955), and addressed to one Eric B. Gutkind, a German-Jewish philosopher who apparently had mystical notions about the power and importance of Jewish cultural ideas and influence in history. He sent a copy of his book Choose Life: The Biblical Call to Revolt, to Einstein, in 1954, eliciting the response, from which the following quotation, is taken:

The word God is for me nothing more than the expression and product of human weaknesses, the Bible a collection of honorable, but still primitive legends which are nevertheless pretty childish. No interpretation no matter how subtle can (for me) change this. These subtilised interpretations are highly manifold according to their nature and have almost nothing to do with the original text. For me the Jewish religion like all other religions is an incarnation of the most childish superstitions. And the Jewish people to whom I gladly belong and with whose mentality I have a deep affinity have no different quality for me than all other people. As far as my experience goes, they are also no better than other human groups, although they are protected from the worst cancers by a lack of power. Otherwise I cannot see anything 'chosen' about them.
In general I find it painful that you claim a privileged position and try to defend it by two walls of pride, an external one as a man and an internal one as a Jew. As a man you claim, so to speak, a dispensation from causality otherwise accepted, as a Jew the privilege of monotheism. But a limited causality is no longer a causality at all, as our wonderful Spinoza recognized with all incision, probably as the first one. And the animistic interpretations of the religions of nature are in principle not annulled by monopolization. With such walls we can only attain a certain self-deception, but our moral efforts are not furthered by them. On the contrary.

I am not qualified to talk about higher physics, or the philosophy of religion. Like most laymen, I have casual opinions about religion, and a smattering of impressions picked up piecemeal over the years from the media and written accounts, about the significance of Einstein's researches and discoveries in the fields of theoretical and applied physics. That's a way of saying that when it comes to higher physics and the probable importance or application of Einstein's mind to "secular" (that is, non-scientific) ideas, I don't know what the heck I'm talking about. You could also, of course, say the same thing about Einstein himself. He was a man interested primarily in scientific research, and did not spend his time pondering religious questions.

But there are much higher implications to much of what is studied and considered in scientific inquiry. For all the test-tubes, electronic devices and speculation that goes into research, there is another aspect to our attempts to understand the behavior of matter in its various dimensions. One could hardly miss that the history of man's evolving understanding of the universe is largely what drives our "religious" notions of the meaning of life, the purposes of conduct, or ultimate implication. The progress of human recorded history is the account of the chronology of that evolution of thought. Religious thought is informed by knowledge, all kinds of knowledge--some of it rational, some of it non-rational.

Einstein's remarks above constitute a familiar skepticism about the irrationality of religious thought in history, by one for whom universal questions could best be pursued through rational inquiry (or the scientific method). He describes The Bible as a collection of pretty childish legends or superstitions, and he scolds his correspondent for pretending to make a claim of dispensation from causality otherwise accepted  to believe in Jewish monotheism. With such "walls [of pride]" man can attain a certain self-deception, and his moral efforts are not furthered by them. Einstein is taking this man to task for not acknowledging the superiority of scientific knowledge over superstition, and he sees that as a psychological disposition on the personal level. In other words, he sees religious thought as a predisposition--or weakness--in certain people.

Nineteenth century rational philosophy rejected religious theory in favor of "scientific" analyses of history and society and knowledge. Marx believed in the power of scientific analysis to rectify some of the wrongs perpetrated upon underprivileged classes with the rise of the factory system, and saw history as a progression of stages which would flower into higher versions of human cooperation and fulfillment. We know that Marx didn't account for human intractability, and history has, if anything, followed pathways in the opposite direction from what he seems to have predicted, or where he believed it should lead.

For my own part, I've always had a semi-mystical intuition that scientists--at least those who think beyond the mathematic languages used to describe phenomena--that the highest levels of theoretical science begin to approach what are, in effect, religious ideas. When people try to describe where theoretical physics is, at this particular moment, the layman's language they use, approaches the indescribable. They are talking about concepts which either sound vague, or nonsensical, or counter-intuitive. Theoretical physics begins to sound like mysticism. I won't go into the details of string theory, or black holes, or alternative universes, or anti-matter. Most of us have heard of these things, but we have no idea how to describe them accurately, since we can't speak the language of higher physics.

And yet Einstein, the very personification of the advanced mind who penetrated where no man had ever gone before into the mysterious code of meaning as revealed by science, rejects all religious notions of the past as fairy tales.

Religion, like science, is composed of (a) language(s). Before science, men attempted to describe the meaning of life and the universe through the language they had, before advanced symbolic systems of representation were invented to manipulate concepts beyond the range of ordinary discourse. Much religious thought and teaching originates in pre-scientific epochs, so it is no surprise that our age, seduced by the power and complexity of scientific thought and knowledge (and technology), should find Einstein's kind of skepticism natural, and convincing. We may scorn ancient religious doctrine, spawned in the primitive context of limited knowledge, but we know that it represented a genuine effort to comprehend the world.

Einstein took pride in his Jewish heritage, but he did not regard his ethnic (or racial) inheritance as "chosen." The only good thing was that they (the Jews) had avoided the worst "cancers" of "power" by never having possessed it! That is a kind of humility or a conviction born of mordant irony.

Few of us share the mental acuity to follow the theorists on their voyages of discovery, or to follow the course of their dialectic. If we could, what would that tell us? There are always some of us who can think better than others. They lead. We watch or follow in astonishment or skeptical regard.
Posted by Curtis Faville at 8:59 PM

you're right about the semi-mystical quality of a lot of theoretical science out there: they say it's all unintelligible, or at best an imperfect approximation, except to those who can do the complicated math and physics. I suspect it may actually be the other way around.

I'm presently reading Roy Bhaskar's "Scientific Realism and Human Emancipation", and it looks as if philosophers of science have taken a turn to "social theory", combining scientific language with both marxian analysis and good old-fashioned 'ontology'. I've seen something like this in poetry criticism (as in the case of Levi Bryant of "SR/OOO literary theory"). We may very well be seeing the collapse of scientific method into too many decisively implausible theories.

It does seem to me that, whatever the scientific complexity and ingenuity, 'infinity' will always come as a troubling limiting condition of thought. Maybe we just caught Einstein on a bad day.