I don't know what to say about people who dote on their pets. Once upon a time, I would probably have thought it over-indulgent.

When I was a boy, I got a girl kitten whom we named Snowfoot, as she was black with white feet, a white stomach, and a white chin. I don't know why animals coats are colored the way they are. I once heard that Siamese cats are darker where they're hotter (or where their blood collects in their extremities (feet, tail, head)), but I don't know about that. Seems bogus. It certainly doesn't seem to hold true for other cat breeds.

We got Su-Mee as a kitten, when he was just a few weeks old. He was born in April 2010. We got him from a breeder. I know the PC thing now is to get your pets from the pound or a shelter, to save them, but we've grown fond of Siamese, and they don't show up very often in rescue. As a male, he may think his name is slightly inappropriate; I often just call him "Sue" (as in "a boy named Sue"). We name all our cats after coffee beans, or nearly. We've had Java, Vanilla ('Nilla), Coco, Mocha (Mokie), Lottie (for latte), and now Su-Mee (for Sumatra). We'll be running out of names soon. 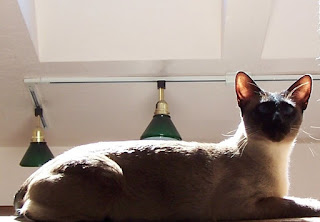 Su-Mee grew up in an ideal household, filled with his Mother and siblings. The furniture and rugs were cat-proof, the owners had created a perfect routine, and all the cats got attention and handling and the best food.

Su-Mee has turned out to be the best adjusted and habituated animal we've owned. All cats are different, with individual personalities, and each has peculiarities which make it unique. One thing we've noticed with Siamese is that they are creatures of habit; they like to do the same things at the same time every day. Also, they seem very attuned to our moods, checking us constantly and making slight reactive adjustments in their behavior. Su-Mee is by far the most affectionate of the cats we've owned. He requires a certain amount of "lap-time" every day, and likes to cuddle and kiss regularly. He's attached himself to me, and thinks of me as the "alpha male" in the household. Mocha, our other older male, and Su-Mee like to joust and tussle with each other, occasionally racing around the house in mad-cap hijinks. Needless to say, we aren't a family which owns (or displays) crockery or glassware or sculpture on furniture. It wouldn't last long if we were. Also, fabric furniture is endangered, so we cover up the couple of pieces we do have with plastic.

Su-Mee has what I would describe as the classic Siamese voice: low-pitched and lamb-like, and when close and curious, a quiet low rumbling murmur. He's a picky eater, and has grown fond of a new brand of crunchies which resemble dark brown Cheerios. He can put those away at an alarming rate, and has begun to get a bit paunchy, not good for an otherwise long and limber body like his. He has the large Siamese translucent ears--as you can see in the photo--and a long, "insinuating" tail. He won't tolerate having his face scrubbed or his nails trimmed. I haven't tried bathing him yet, and I'm not sure I want to try. Cats who don't want to do something can become feral, and Su-Mee is a very strong cat. He's good at chasing bugs, and will often sit on a window-sill watching the birds as they flit among the shrubbery or tree branches outside. Sometimes, when he's getting turned on by this, he'll let out a little cackling sound, something I've seen other cats do when in high hunting mode.

Cats generally live between 12-18 years, though some may live longer. Vanilla lived to be 19, and was sweet and affectionate to the end. Lottie died at 8 of breast cancer. I suppose it's possible that Su-Mee may outlive me, if he has a long life. Once, many years ago, the San Francisco Chronicle reported on the case of a very rich old woman who left her entire fortune to her cats. I suppose the administrator of the estate probably maintained these animals in some kind of a home, while donating the residue--after his fees--to the SPCA. Or maybe the City of San Francisco made a claim against the estate and seized it to support the local animal control department.

Domestic pets depend upon us for their livelihood. Those that "go back into the wild" are no longer domestic, though we still have responsibility for their welfare. Is man's "best friend" the dog, or the cat, or the horse? Obviously there's no completely correct answer. Cats are generally clean, orderly and loyal. Siamese, especially, seem more civilized than other breeds. Su-Mee is a chocolate point, with very deep blue eyes. Right now, he's nagging me for his third breakfast, so I'll conclude this with a purr of appreciation.
Posted by Curtis Faville at 8:26 AM

our love of cats is equally strong; however, my tastes are not as exotic. I prefer the 'independent-to-the-point-of-arrogance'type of Tabby, street-wise and cunning. The cat that likes to love and kill with the same abandon. Who leaves her trophy bird-wing or gizzard at my door mat. I had a cat named Lulu who became arthritic and moved painfully slow in about her 19th year: my father accidentally ran her over backing out of the driveway and buried her in the yard. I cried all day for the cat I passed through late childhood, adolescence and early adulthood with: I was 38.

Our love of cats is strong.

put her in a box and put the box under the kitchen stove...

turned out to be an Alley Cat that was as a kitten very curious snooped around and into every dark-warm place that she could find... so, I named her Snoopy..

turned into an heck of a mouser .. she'd even go out-side and catch rats and bring them into the store.... to play with.

Snoopy lived many years had at least 15 litters

was neat to see her carry her new borns in her mouth to her "secret" place behind the old converted-to-gas
coal-fired furnace that was in the cellar.

Snoopy got her back crunched twice the first time it paralyzed her tail which she dragged along the ground the second dog even crushed her lower back so that she cld only pull herself along using her front
legs... my grandmother took her somewhere to be put to sleep

the neatest kittens that she had were the white ones...
have had many cats since... the found strays are the best ones..

the last one that we had was TOUGPHIE

Daisy used to hitch a ride on Toughie's back !

cats are smart. dogs are stupid.