A Precise Moment of History

The 49ers lost the SuperBowl 34 to 31. It was a game for the ages--dire beginning, unbelievable comeback, crucial failure at the end. 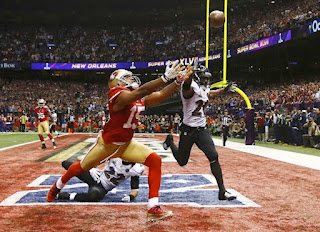 In the movie Patton, the screenplay for which was co-authored by Francis Ford Coppola and Edmund H. North, George C. Scott and his adjutant stride out onto a field of a bloody battle, which the night before had come down to hand-to-hand fighting. He kisses the solder leaning against a tank, and says to his aide, "God, how I love it so . . . I had a dream last night. In my dream it came to me that right now the German Reich is mine for the taking. Think . . . I was nearly sent home in disgrace. Now, I have precisely the right instrument, at precisely the right moment in history, in exactly the right place . . . This too will change very quickly, like a planet spinning off into the universe . . . A moment like this will not come again for a thousand years . . . All I need is a few miserable gallons of gasoline . . . Right now the weakness is here . . . In ten days we could be in Berlin!"

The sense of the passing of a moment of opportunity was so keen at the end of the game. The Niners had fallen far behind (28-6), and all seemed lost. Then after a long delay to restart the stadium lights which had mysteriously failed just after half-time, they began a dramatic comeback which brought them to within 5 points of Baltimore, with just two minutes to play. They were on the Ravens 7 yard line, with a first down. Four downs to score and a SuperBowl victory!

Clearly, Kaepernick is our quarterback of the future. Which means there may well be more chances down the road. But this one really hurt. We were that close!

Posted by Curtis Faville at 8:01 AM