Calico the Wonder Horse or The Saga of Stewy Stinker 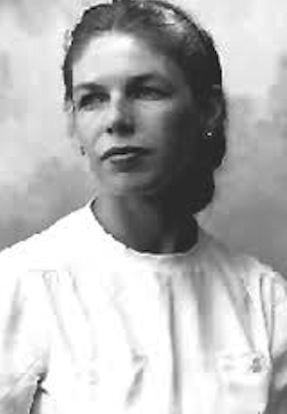 As children, we're at the mercy of our parents' will. What we know of life and conduct and possibility comes directly from their sense of the world. Parents are our guides in the first formative years, and what they think determines to a large degree how we turn out as we mature. For many children, the childhood years turn out to be a kind of collaboration between the irresponsibility of their parents, and the necessity of adapting to uncertain conditions; in many broken homes, children in effect raise themselves. But that wasn't the case with me. My parents had confident notions about how best to raise a child, and that included, from the beginning, a steady diet of reading. Until I was about 7, I was read to; thereafter, I was made to read out loud about every other night. I can now clearly recall memorizing these early children's stories, and certain ones became favorites which we would read over and over again, almost like a kind of mantra. My parents weren't religious, at least in the specific sense of that word (they never attended church), but the performance of language texts was clearly regarded as an invaluable kind of training. The best of these children's stories will be with me forever: Now, 60 years later, I can still say with certainty that my thinking about narrative and image (illustration) is heavily influenced by those books from my childhood. Raggedy Ann, Winnie-the-Pooh, Johnny Appleseed, Stuart Little, Peter Rabbit--these were the figures who first got into my head. But among all those early classic examples, it's another book, Calico the Wonder Horse, or The Saga of Stewy Stinker [Boston, Houghton Mifflin, 1941] which left the biggest impression on me, not just for the suspense and hypnotic intensity of its story, but for the striking imagery which accompanied the text. Its author was Virginia Lee Burton (Demetrios) [1909-1968], an important figure in the juvenile literature genre, who had already established herself as a skilled children's book author by the time that Stewy Stinker was published, having published Choo Choo [1937] and Mike Mulligan and His Steam Shovel [1939]. And she would go on to publish (or illustrate) another dozen or so titles, including Maybelle the Cable Car [1952]. 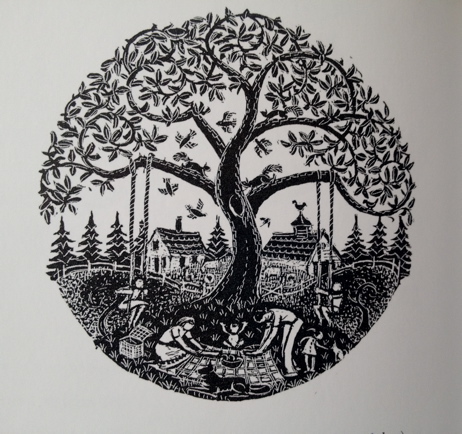 Illustration from one of Burton's books

Burton's early training was as an artist. She studied art both in the Bay Area, and in New England. She seems from her pictures to have been an attractive and motivated artist, a devoted wife and mother, as well as an organizer (she began the Folly Cove Designers textile collective in Cape Ann, Massachusetts)in the same year that Stewy Stinker was published). She and her husband George Demetrios were both artistic (he was a successful sculptor). By the time she was in her late twenties, she already had a distinctive visual style, and had absorbed important lessons from the best practitioners in illustration. 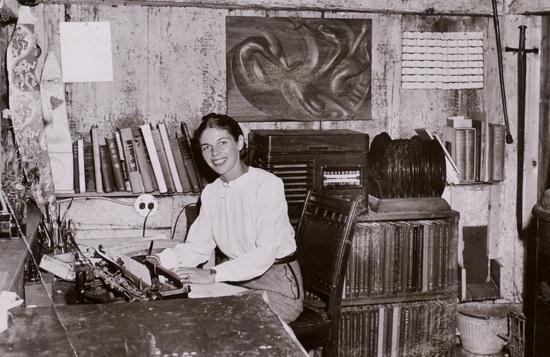 Burton in her study

She said she drew inspiration directly from her own two boys, on whom she tried out her stories before sending them off to publishers. If a story put them to sleep, she set it aside. In the case of Stewy Stinker, she reported that she wrote it (for them) to wean them away from the comic books they were becoming preoccupied with. Dramatic illustration was in an exciting phase during this period, with Lynd Ward and Rockwell Kent working in America. Children's literature underwent a revolution starting in the late 19th Century and progressing through the 20th. The development of visual reproduction techniques in printing, along with the artistic advances of Modernism, and the dawning of psychology (and child psychology) and the use of visual aids and art in pedagogy, all contributed to an explosion of literary and illustration art. In the 1930's, there was added a dose of social consciousness and an emphasis on family values. 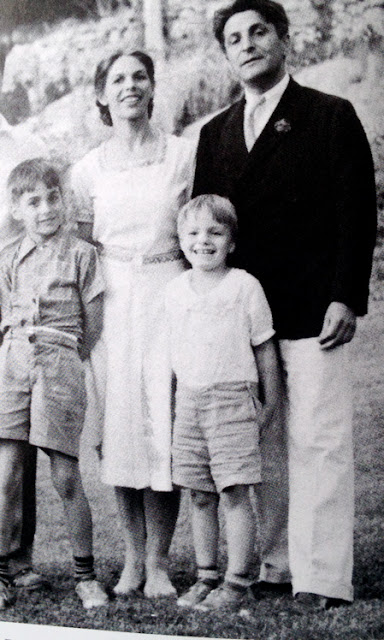 And if ever there were an example of a family devoted to art and artistic enterprise, the Demetrios family would be it. Trained as an artist, Burton let her child narratives grow out of the intimate attention to her own two young boys, and tailored her works to appeal to them. Both of her sons, by the way, grew up to have interesting, productive lives, one (Aristides Demetrios) becoming a professional abstract (public sphere) sculptor, and the other a head executive for theme parks (Marine World Africa USA). 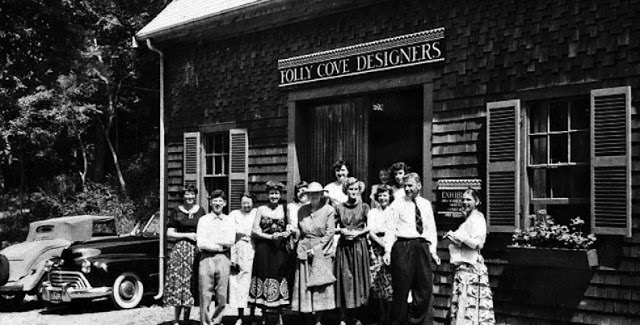 The Folly Cove Designers organization has almost a Bauhaus (or Black Mountain) feel, judging from these vintage photographs. It lasted from 1938 to 1969, working in the linoleum block on fabric printing technique to realize their designs. 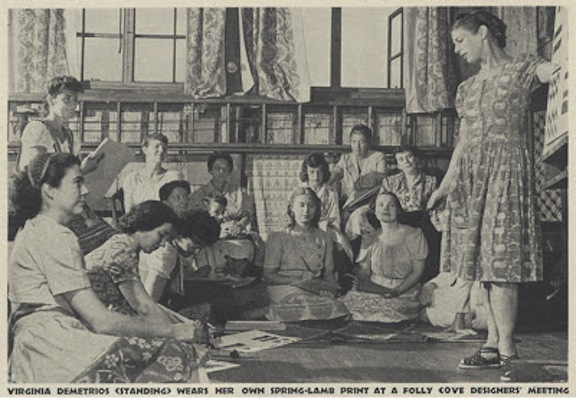 Designed around the idea of a medieval guild, participants worked separately, then presented their designs to the rest of the group for an informal jury consideration. It closed down when Burton died, and the materials were placed in the Cape Ann Museum.

Burton's style is ingenious, to say the least. She was interested in mazes and dyptichs, repeating freizes, symmetry, and sequencing. Stewy Stinker has all these qualities, and is highly stylized, but without any off-putting geometric domination: The imagery is guided by a sure sense of progression and the words and images are intertwined to make a single thread. The pictures are neither realistic nor condescending.  A lot of juvenile literature suffers from the desire to emulate supposed childish views of reality, but the best work in the genre simplifies the medium without watering down or dumbing down the content. 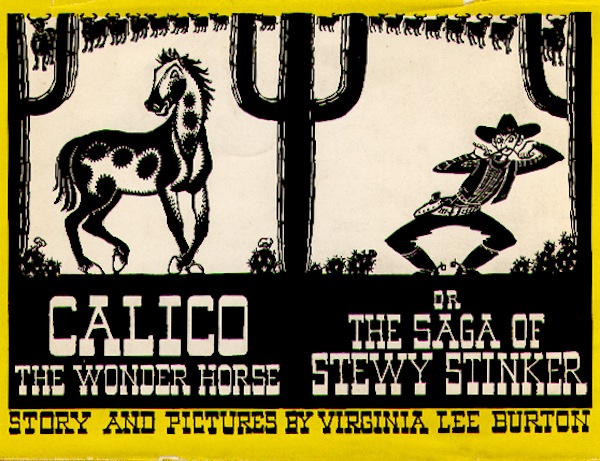 Calico the Wonder Horse or The Saga of Stewy Stinker draws on the cowboy myth, as well as the comic book styles of the 1930's, but not naively--with impressive sophistication. To summarize, it's the story of a horse who almost single-handedly saves a small Western town from a band of horse-thieves and a torrential natural flood, taming the outlaws and bringing peace and harmony back to Cactus County. Along the way, there are feats of derring-do, and lots of visual hijinks, as the forces of good and evil contend. There's also the trope of the miraculous domestic animal who is intelligent, courageous, loyal, and lucky.

Interestingly, the front and back pages of the text display the whole sequence of pages in order, which emphasizes the serial nature of the narrative. I don't think I've ever seen this done before--it almost makes the separate plates feel like a deck of cards, or which draws attention to the variable structure of each, though placed within the continuity of the unfolding story. 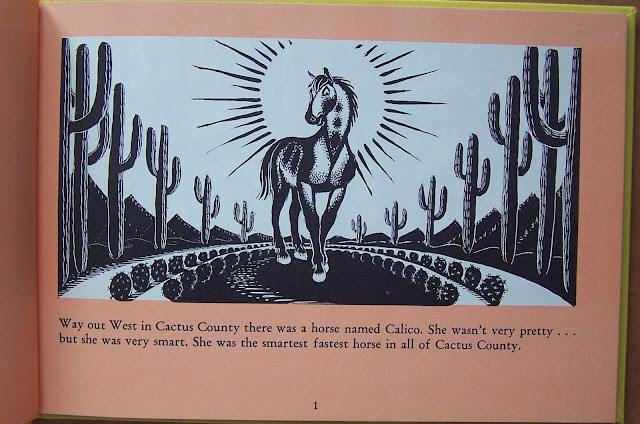 The same qualities which informed her textile designs-- 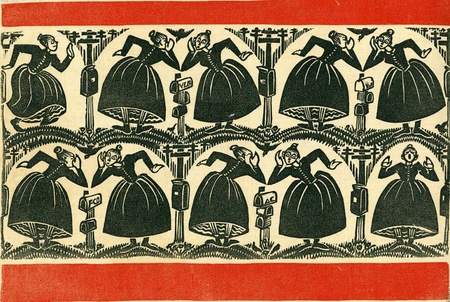 --are evident in her book designs: The stylized freizes of cactus in rows and contoured landforms, the geometric angles and curves of the cliffs and rock faces, with zig-zags, S-curves, steep pyramidal jags, and the sequential linking, as with the box canyon view and the full-length portrait of Stewy on the same page.

Burton's use of white-line on black background allows her to evoke a nightmarish mystery and foreboding. Darkness is associated with Stewy's gang, and their cattle-rustling (done at night), and Stewy (in his darkest hour) escaping from the black dungeon (in the cellar of the schoolhouse), by digging under the foundation in total blackness. 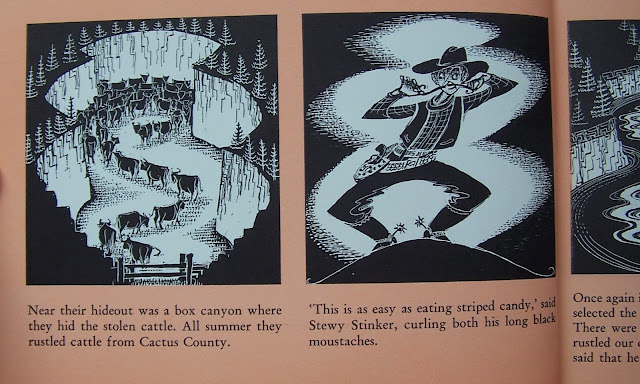 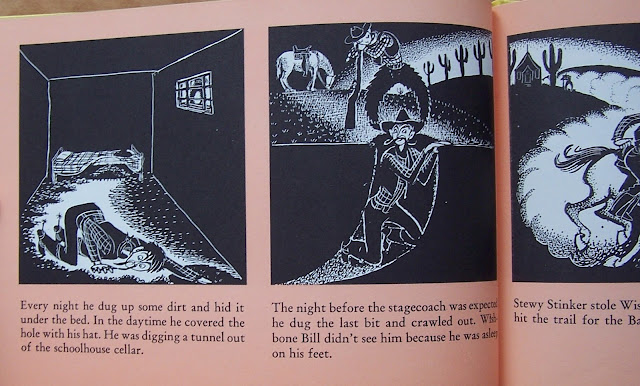 The values of community are emphasized, as in the end the newly tamed gang members are drawn into the town Christmas party at the local town hall. The power of community feeling to turn bad men into good, and draw them back into the life of the larger society is the underlying message of the tale. For Burton, family and community and socially integrated art are all intimately linked, and the integrated visual narrative of her children's books becomes the ideal medium to express this. But for me, the little morality play was primarily a cowboy cartoon, whose dreamlike world of unreal landscapes and intriguing perspectives drew me in to the curious and absorbing passageways of my own imagination.
Posted by Curtis Faville at 9:14 AM