What Happens to People

One of the truly great photographs of all time is the portrait of these two small girls by Diane Arbus. 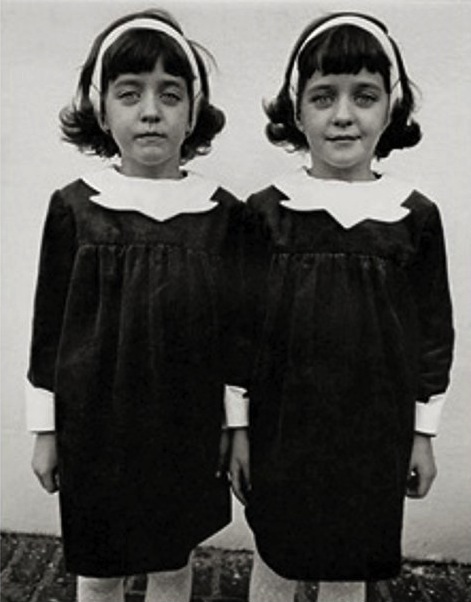 The picture is a meditation about personality. I can't remember the very first time I saw twins. There were a few sets in the suburban schools I attended. The story was they came from the same egg, or the same genetic material that split, for some reason, into two, each an exact copy of the other. But then I got to know a set of twin boys who didn't really resemble each other that much--I mean that they were actually of different body builds, and their faces didn't seem as if they were a match. They could certainly be brothers, but you wouldn't guess they were actually twins. Twins of different sex seemed to present less of a problem; they often looked only vaguely alike.

Later, when I got to see and know other sets of twins, it became apparent that though they might look eerily alike, even if they dressed and groomed and acted alike, there was always a difference, a distinction which--once you became more familiar with them--was immediately recognizable. Even if these two identical people had started out with equal blueprints, they could never remain wholly united in the fruition of their maturity. They would drift apart, though there were also people who said that twins were always linked, would always have an intuitive connection, perhaps even a supernatural one, inescapable, perhaps like telepathy.

I don't know that anyone I ever talked with about it said they wanted to be a twin. Would marrying someone who was a twin be like marrying "two people" since they would always be connected and intimate with each others' secrets and problems and dreams? The woman I married has the Gemini sign, which signifies the Twin. Actually it signifies contained opposites, and all the complexities that dialectic implies. I don't know that I've thought how this might be expressed in her character, though when you live with someone for 40 years and more, you do see the contradictions and consistencies in their character at a level of confirmation that is unparalleled in your life experience. Having a single mate for life is a crucially enormous segment of the potential range of things to know and discover about people, about being human; not to have had it, I think, would be a terrible poverty.

The first thing that jumps out at you in the picture is that these two girls are already different people, each has begun to split off from the other to create and express a different comprehension, a different  projection of the world. It's as if nature demands that we each become separate, isolate beings, as if this were a kind of survival mechanism or adaptation. Each of us knows, inside the containment of our personality, that we're isolated from every other person, and that no matter how hard we might try to emulate or copy another person's life, we'll always be trapped inside what we are. It's our fate.

The next thing I notice about the expressions on their faces is that they seem to be emoting (or coming) from different places. The sister on the right has a more charming, a sweeter smile. Any human expression can have multiple meanings (or interpretations): A smile can suggest happiness, or ingratiation, or insecurity, or obedience, or an habitual strategy of avoidance, or pleasure, or amusement, etc. The sister on the left is not smiling; her expression seems slightly strained, or perhaps she just didn't smile at the right moment for the portrait. Their respective expressions could be reversed, leaving us with a mirrored transposition of the initial "difference" implied by their separate looks.

The third thing I deduce is the regimentation of their appearance. They're like dutiful little soldiers in a parochial school, or little choir girls wearing a uniform shared by many others. Their stance is very similar, close, but not intimate. There must be a natural intimacy, you would think, just from the likelihood that they share nearly everything in their lives--eating, sleeping, bathing, playing, praying--which is the outward expression of what all siblings to some extent share.  It's like the symbolic outward representation of the meaning of family, of shared DNA, as if twins were the ultimate weird incestual accident of nature, not to propagate across shared DNA, but to proliferate from a single template, but to what purpose? What would the superstition for twinning be?  Were twins once considered to be diabolical perversions, the way other kinds of genetic accidents were thought to be? Is there something spooky about twins? Would that explain why Stanley Kubrick put these little angels into his frightening fantasy movie The Shining?

What happens to people when they grow up? The world distorts and transforms them, so that as they age and develop they begin to resemble the uniquely ornate freaks that distinguish them from everyone else. Aging seems normal, but what you can see in people's faces as they change over decades of time can be almost frightening. We think that the way we look in old age is somehow a fulfillment of what we were meant to be from our genetic inheritance, but it's also a consequence of the scrapes and blows and terrors which we're subjected to along the way. Some people look like monsters by late middle age. Some people bloat, others wither. Others wrinkle up, become spotty, shrink, become lopsided, top- or bottom-heavy, or just become hardened. It's hard not to become more fixed in your ways as you grow older, and most people tend to look more like how they see the world, i.e., their bodies and their expressions begin to be models of what they think life means. Some people become angrier, others become passive, or frustrated, or more skeptical, others may get silly, or careless, or bitter with regret. Some people seem overwhelmed by their past, others seem to forget everything that happened to them more than a month ago.

Pictures--especially family pictures--tell stories. They are the stuff of memories, reminders of how we looked in the past. The story is the narrative which we construct out of the strangeness of change, the change we can see vividly as we drift further and further away from the selves and situations captured in the photographs.

The two women below are of course the grown-up versions of the twins above, now probably in their early fifties (the picture may have been taken some years ago). In a weird way, they still resemble the sisters they were 45 years earlier. Or have they been reversed? Funny question. For my part, I can see the same personalities inside the faces, persevering over the decades, preserved in their facial magic. Can there be anything more mysterious or fascinating than human faces? Their unique portrait, done when they were just innocent, impressionable, and probably trusting young children, has made icons of their faces. They're almost as famously recognizable as minor movie stars. But not for the reasons that media personalities are. Something much stranger has happened to them. And to us. Arbus has seen something which the photograph reports with unerring fidelity. The flicker of reality is like the replicating frames of perception which comprise the experience of being alive, of seeing the zillions of light rays in which we're constantly bathed. There's a stillness at the center of all this flux, and the photograph reminds each of us of our isolation at that center. Everything revolves around us. Look in the mirror and who do you see? The irretrievable progress of what was, in all its particularity, now forever closed. The photograph is like a quick graph of a phenomenon that propagated itself from the tugging strands of microscopic DNA inside their mother's womb. At some intuitive level, could these two people always somehow feel the remorseless stretching apart of their common unity of template, splitting them into two isolate halves?

What happened to them? 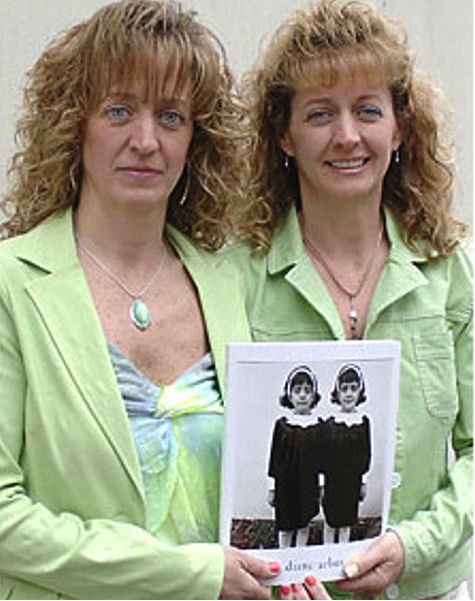