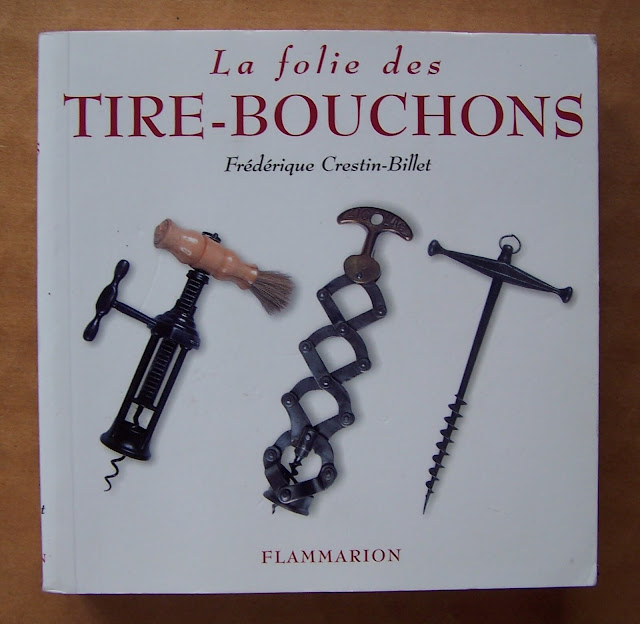 I came across a delightful little compendium recently, published in France (and in French), about the history and design of corkscrews. Leave it to the French, where wine is king, to focus on the tools of this trade, since the removal of corks from wine bottles is something that is performed all over France (and the world), millions of times every day. Its title in English would be Folies of Corkscrews, or Madness of Corkscrews, or Silliness of Corkscrews. (Folie is difficult to translate into English; in its English incarnation folly it can mean waywardness, wickedness, lewdness, foolishness, costliness, whimsicality, uselessness, prankishness, etc. In my mind, all these qualities are contained inside the French folie, echoes of which I "hear" in the title of this book.

The history of the use of cork (literally the bark of a tree, which traditionally has been harvested in Spain) parallels the invention of the corkscrew.  Wikipedia traces its origin to the appearance of a description from 1681. Referred to as a "steel worm" it began apparently as no more than a modified drill-bit, and became more sophisticated as time wore on. The interesting side of the evolution took place on the handle part of the tool, and this little novelty volume is largely devoted to the multiplicity of designs that people have devised down through the centuries. On the technical side, the only major design innovation was the invention of the so-called "twin prong" cork puller, shown here-- 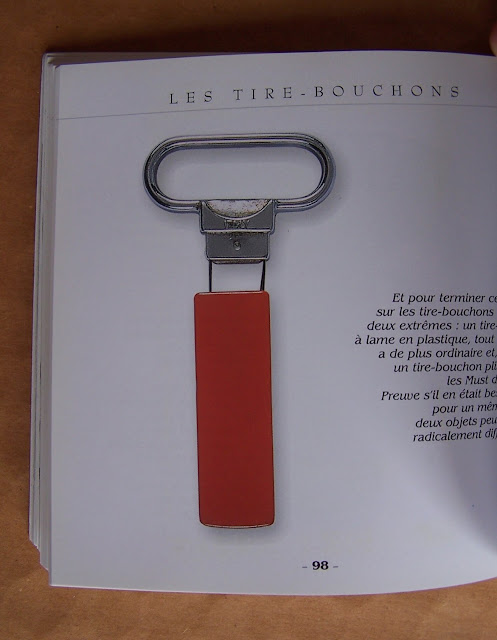 --which, rather than being screwed into the center of the cork, functions by sliding its two long thin metal strips down opposite sides. Pulling on the handle--for reasons that are not clear to me--causes these strips to tighten around the sides of the cork, which comes up, usually more easily and with less force, than with the traditional corkscrew. (Its drawback is that it isn't always easily pushed in.) I don't know how popular the twin prong model is these days. For myself, I prefer the "wing corkscrew" (or "Italian" design shown here)-- 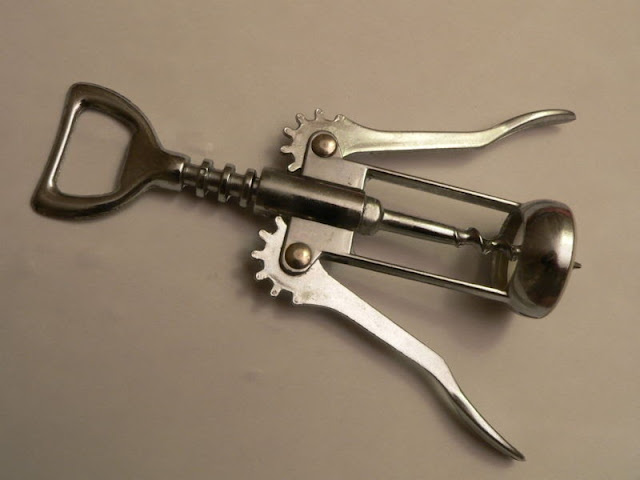 --which, perhaps because of its seating ring at the base, provides a much firmer grip on the bottle head, allowing one to lever up the cork from its snug fit with little side bias. There have been some pretty weird shapes devised over the years, which depart radically from the practical, functional shapes seen here-- 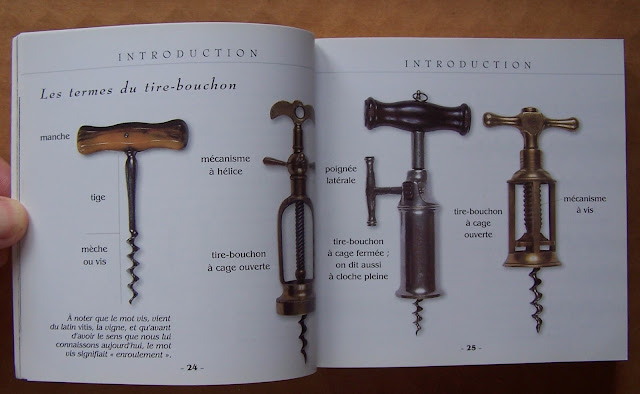 Elegance would be expressed in any aspect of life, and in the days when royalty prevailed, the most ornate and ostentatious kinds of elaborate carvings and novelty adaptations were done. 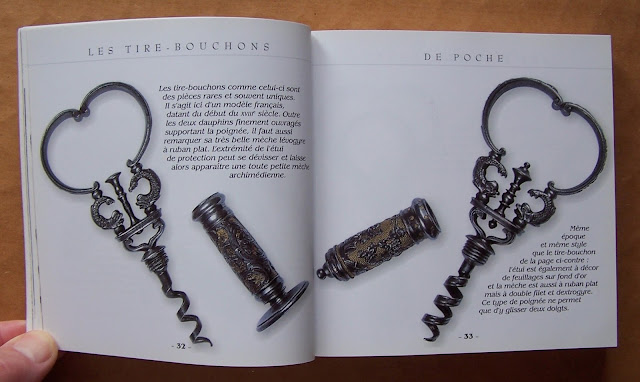 As these light-hearted examples show, designers were beginning by the turn of the last century to employ "naughty" ideas--perhaps in sympathy with the negative association of alcohol (and drinking) with bad behavior (or the dissolute evils of drink). 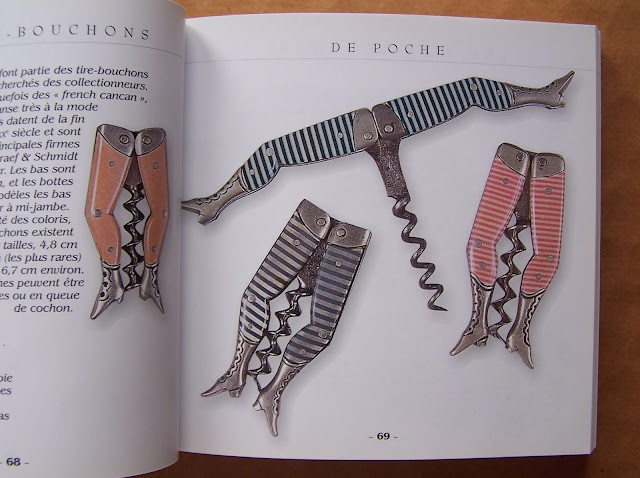 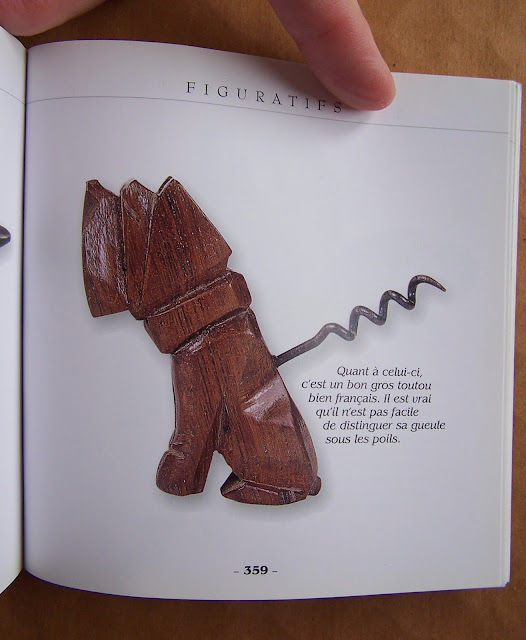 A little Scottie dog's tail might inspire one designer, whereas-- 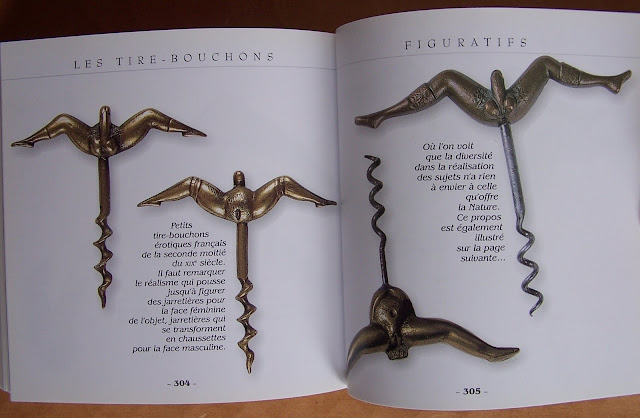 --another might be moved to these awfully frank and scatological versions.

Though these lewd little examples might be well beyond the limits of good taste, I find them absurdly innocent and funny nonetheless-- 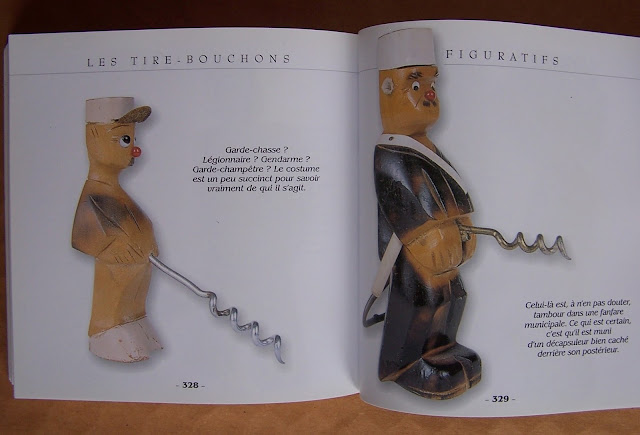 One like this (below), would probably fit nicely into our sense of the Gay Nineties--of Parisian dancers kicking up the Can-Can and showing a good bit of petticoat and stocking-garters-- 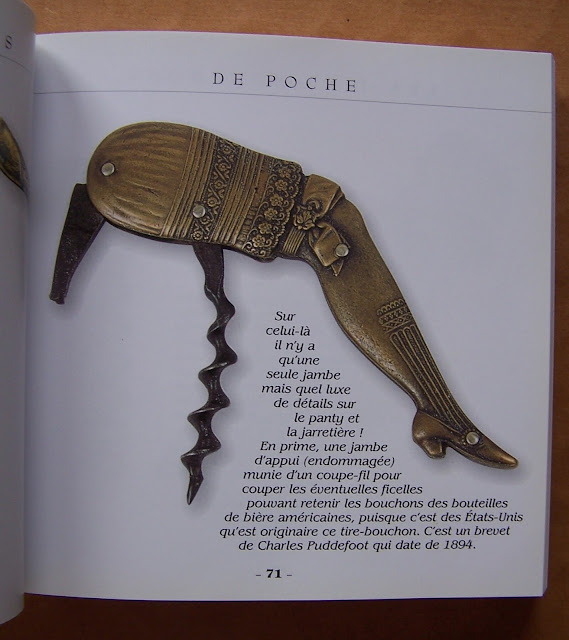 --which might conjure up bustles and bodices and whalebone stays! 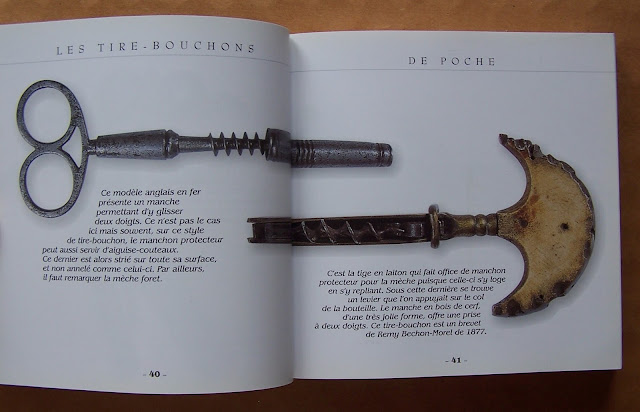 These sturdy designs suggest for me a kind of Anglo-Saxon quality which I find manly and forthright. Long live the King and his labyrinthine wine cellars!