Have you ever happened, by accident, to step on your pant-leg?  That is, if you were walking around in your socks or barefoot, and the edge of your pant-leg slipped under your heel?  What you immediately noticed is that there would be a stretch on the pant-leg, pulling the pant down, and putting mild stress on your knee and ankle.

In sports, uniform fashions change just as they do in ordinary life.  Look at the uniforms that football or basketball players wore 50 years ago, and it's immediately apparent.  Tight, loose, long, short, colorful or drab--long hair, short hair, beards, necklaces, etc.

But essentially, sports uniforms are meant to serve specific purposes, to allow the body to move freely, while providing a vehicle for team or individual identification and color. No one playing a sport would wear street shoes on turf or wooden floors.

There is little room for individual expression in the wearing of sports paraphernalia.  Football players must wear helmets and padding and cleats for protection and traction.  Basketball players want to move freely, with a minimum of weight, and they want tennis shoes that permit them to cut and weave around with confidence.

Recently, we've seen a trend towards more eccentric "expression" of uniform styles. In basketball, the trousers have grown bigger, and longer, to no apparent purpose.  It may well have to do with African American preferences for baggier and baggier pants, a fashion trend that is purported to have originated with prisoner uniforms.  More African Americans end up in prison, as a percentage of the population, than any other group.  And professional basketball is now wholly dominated by African American players.  So it may well be that the NBA is now dominated by prison style fashion influence.  To some, this may seem contradictory, to others not.

In major league baseball, uniform design grew up in response to the requirements of play.  A player needed to be able to move freely, but because the game was played partly on raw dirt, a player needed to be able to slide and dive without his pants getting in the way.  The standard baseball uniform called for trousers that came down to the knee, and knee-socks (or knickers) were worn on the calf, tucked in with a loop around the instep.  During the 1940's and 1950's, there was some movement of the pant down below the knee, but the socks were still well above the ankle.  The pants didn't bunch at the knee. 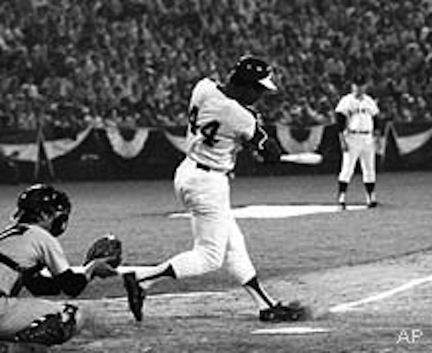 In the 1960's, uniforms began to be worn tighter, then they loosened up again in the 1980's. Then, in the 1990's, slugger Barry Bonds began to wear his trousers all the way down onto his shoe-tops, completely foregoing knee socks, and allowing the pants to rumple up around his ankles.  Aside from the fact that this new "look" was very untraditional, the question arose as to whether the old style had actually served any real purpose, or whether the new one offered any kind of improvement. 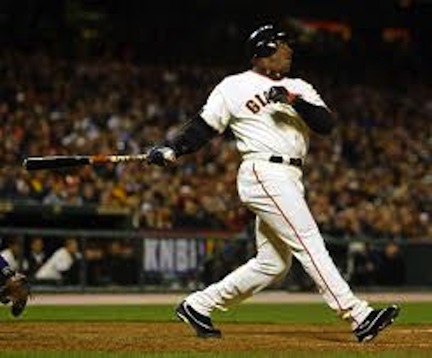 Were Bonds' new trousers a fashion statement, or just an acknowledgement of the demands of play on the field?  Getting back to my earlier query about pant-legs, it would seem to me that to have complete freedom of movement, combined with protection to the lower legs and ankles, would dictate that the knee and lower legs not be "bound" by having the cuffs or bottom edges of the pants hung up on the tops of the shoes, or (even worse) pulled under the heel, causing the pants to be snagged and the player's legs to be constrained.

Over the last 15 years, Bonds' new trouser style has gone nearly viral throughout the major leagues, and now is the dominant look. Players sporting the "old-style" knee-socks are now regarded as throwbacks or eccentric sports.  Moreover, the trend has become even more exaggeratedly counter-intuitive, with many players wearing their pants so long that the rear edge slips right under the heel, much the way that current-style denim (Levis) are worn, causing (allowing) them to be frayed and soiled. 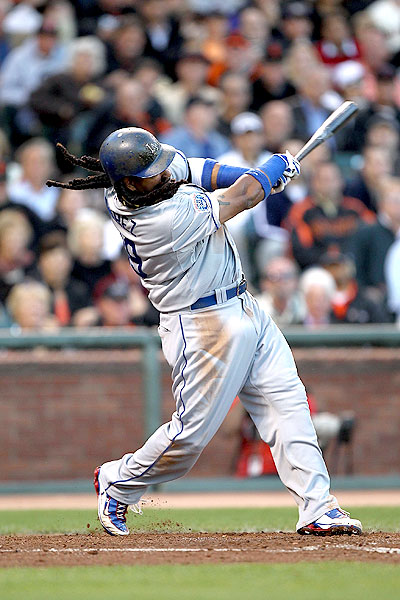 The prerogative of major stars in professional sports has traditionally permitted them to have more leeway in attire.  Were Bonds not to have had his late career surge (enhanced with performance drugs), it's doubtful his style "statement" would have had the same impact.  Or maybe we've just become accustomed to public figures making weird fashion statements.  Fashion, after all, isn't about practical, sensible considerations.  It's at least partly, in the modern world, a creative enterprise.  There's an advance guard of fashion, which has absolutely nothing to do with comfort, or expense, or beauty (though beauty, as always, may be in the eye of the beholder).  One man's clown suit is another man's formal attire.

But when fashion and sports mix, there has to be a middle ground.  Traditionalists like to keep things the same, just for the sake of continuity and honoring the past and history.  Innovative-minded types like new ideas, new looks, and experimentation.  But empirical testing would suggest that Bonds' low-rider pants, curled under the heel, actually makes playing a little more problematic.  Fashion may be getting in the way of performance.  Personally, if I were a major leaguer, I think I would prefer wearing my pants a little above the ankle, maybe not necessarily above the knee, but certainly up to mid-calf, in order to have complete, unfettered, movement of my legs and feet.  Stars may decide they want to "express' themselves, and if it does no harm, it's probably a tolerable thing.  But mediocre players who imitate a new fashion which may actually impede their performance, are kidding themselves.  Wearing your pant-leg under your heel is just stupid, and it looks kind of sloppy too.  At least to this benighted old fan.
Posted by Curtis Faville at 1:18 PM