There has always been a strong tradition of fantasy in Hollywood films, and the re-cycling of classic material was present from the beginning. In theatrical productions, big panoramic narratives were limited to a few set-scenes in which the sweep of landscape and large-scale adventure was merely referred to off-scene. What movies brought to historical fiction and recorded historical or Biblical accounts was a sense of the dimensions and echoing reverberations of crucial events. 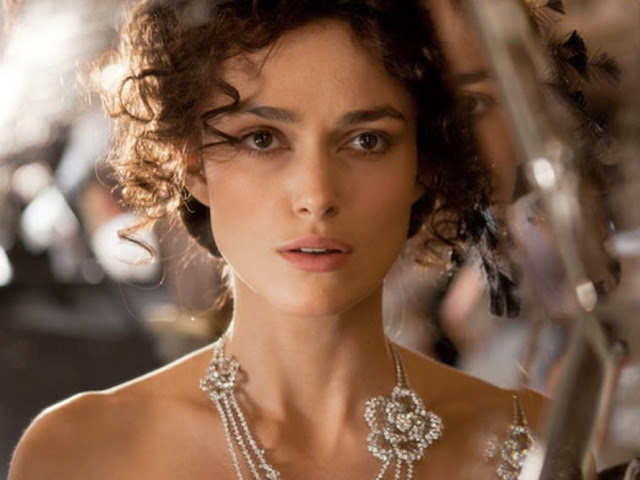 Keira Knightly--is that a hair-lip, or an expensive plastic surgeon's mistake?

Straightforward narrative adaptation carries risk. There is always the danger of conducting a slavish adherence to a plot line, which can be very powerful and convincing in a novel or a narrative poem, where the author can throw emotion and implication into sharp relief with explanation or interior meditations; but in a movie, slow moving, heart-rending involvements among characters can put an audience to sleep. Daytime television soaps have been built on this fluff and nonsense for decades, but movie-makers have known for a long time how dangerously melodrama--as a generic alternative to action--can turn out. 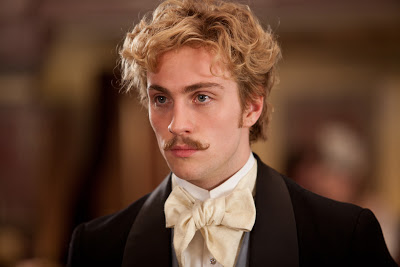 Did this guy wander in from the set of Sailor's Night Off?

In the 19th Century, hand-wringing cliff-hangers were born. Dickens, a popular purveyor of the early forms of schlock in literary fiction, picked up on the theme of the billet-doux (Richardson had invented it a century earlier), and expanded it into a vehicle for muckraking and vicarious serial obsession. Tolstoy's Anna Karenina is many things, but it is first and foremost a story of adulterous degradation, romantically driven, among the European upper-classes, amidst the tumult of late 19th Century Russia.

What Tom Stoppard, the playwright/screenwriter, and the director, Joe Wright, seem to have wanted to do with this old warhorse was to provide a camp, post-Modern conceptualizing frame, taking the story on its face and dressing it up in exotic drag. There's precedent for this, of course. Ken Russell, in the Music Lovers, or Mahler, or Lisztomania, indulged in a kind of free-lance variation that glorified the over-romanticized fantasy-vision the subjects' music seemed to evoke. The pop-operas of Andrew Lloyd Webber, which contain elements taken from grand opera, musicals, music-hall, to front essentially uninspired musical ideas to audiences unfamiliar with real opera.

Tom Hooper's recent Les Miserables, a pathetic light opera dramatization of Victor Hugo's towering novel, set the stage for fellow "innovative pioneers" like Wright, looking for precedents to justify the dismantling of other seriously conceived works of literary or dramatic art. It's really only a hop, skip and a jump from Johnny Depp mugging and smirking in Charlie and the Chocolate Factory, or the latest Pirates of the Caribbean episode, to the mooning, dewy-eyed Aaron Taylor-Johnson sashaying in circles around Keira Knightly as the anorexic Anna. There's about as much erotic energy between these two onscreen to keep the energizer bunny strutting for one half second. Pardon my indelicacy, but am I the only one who's grown tired of Knightly's weirdly constructed face, which looks as if she's had an operation for a cleft palate?

The early scenes of the film take place on a traditional stage. The curtain rises, and the action begins. As things progress, scene shifts take place right in front of the viewer, as if we were following a hand-held through a round-robin of shifting sets. This constant shifting gets a little trickier as the movie progresses, but the point seems to be to emphasize the dramaturgical clunkiness of trying to make a movie out of static stage set-ups. In some scenes, the extras go through choreographed syncopated motions, in once instance, clerks at desks all thumping ink stamps in unison. In another scene, dancers in a formal ballroom are frozen while the lead couple moves among the inanimate groupings. Actors move up wooden stairways to the catwalks above the stage, where other scenes take place in suspended  space. In another, a horse race begins right on the stage, and in a screwy climax, the horse takes a flying leap off the stage into the audience. With all this chaotic, expressionist nonsense, I half-expected the participants to break out in song. If this were Les Miserables, they would have. If Woody Allen were directing, Konigsberg would leap out of a flaming ring in a cossack's cloak, spouting Spinoza or Nietzsche.

Undermining your own drama with awkward theatre props and surrealistic effects may work with something like Orlando [1992], where the story-line is already an elaborate fantasy with sci-fi pretentions, but attempting to treat a straight late Victorian novel by Tolstoy as if it were a Philip K. Dick daydream is just dumb. Like everyone else in this mess, Jude Law was miscast as the "older" husband of Anna, but at least he soldiers through with something like honest conviction. The rest of the cast probably understood very early on that they were trapped inside an absurd flop, and did their darndest not to be noticed. Joe Wright apparently believes that he was born to direct movies, that he's more comfortable behind a cameraman than doing anything else. Since Robert Altman did Nashville [1975], directors have come to believe that the less control they exert over the making of an ambitious movie, the better. Wright's enormous failure here is but another demonstration--if one were needed--that "accidental" movie making is just an excuse for being unclear on the concept.

In the end, we're left wondering whether this new Anna Karenina is destined to become one of the great camp spoofs. If it doesn't, it won't be for lack of trying. What's next, the Disney version of Boogie Nights? Maybe Coppola could come out of retirement and do a remake of Hairspray!

Posted by Curtis Faville at 8:13 PM