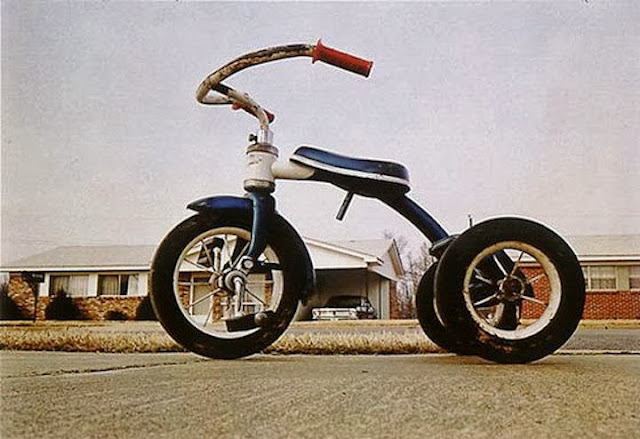 It's not always easy to say why a certain photograph works. Often, that difficulty is a measure of a picture's success.

Our brain processes visual data in ways that are not completely understood, but we do know that it begins by transferring initial signals into an adjusted orientation--upsidedown to right side up, transposing left and right, so that we can respond to our "actual" position in space. Sensitivity to color varies from individual to individual, but the color spectrum can be objectively represented on an accurate graph, based on frequency of the waves of light.

The symbolic and intuitive and denotative senses of things among perceivers are ambiguous and never completely specific. We all see and feel experience a little differently, and even if we share the same rough history or environment, there will always be isolating qualities of our selves which are fixed inside our uniqueness. But common properties can still be assigned to "universal" objects and relationships. As children, we enter the world by stages; we aren't mature enough to drive an automobile, or to handle guns, or to experience sexual interaction. Instead of driving cars, we learn to navigate on small scooters, or tricycles, like the one above.

American childhoods are built out of "toys" like this, and over time, these toys become iconic symbols or images of our common heritage of shared memory. We've all ridden tricycles as children, and we've seen them from a million different vantages, in as many different ways as there are. But there lies hidden, in and around the world we live in, views and angles of vision which we may not notice, may never know are there, simply because no one ever had thought to bring them to our attention.

Most of the time, in our lives, things seem "normal"--that is, they seem as if they're the way they're supposed to be, where they "belong." So as our eyes scan our environment, we tend not to "see" a lot of what's there--it just all fits in to the general gestalt of our familiar surroundings. There's a sense of permanence, constantly being altered by the progress of decay which is the entropic fact of the universe.

When we grow up, we can remember some of what happened to us as children, but not all. Some people recollect more, some less. What we tend to forget is how things may have looked to us when we were just "little people"--only 3 or so feet tall. What did it feel like to look "up" to adults, those monstrous big creatures ambling around, towering above us? We wanted things to be smooth, and happy, and fun. Adults moved in a world of commands, responsibilities, stern denials and mysterious motives. We were under their power. They praised us, or scolded us, or ignored us, or kept us moving in the right direction.

The photographer William Eggleston's work presents art that is superficially bland, even banal--made up of people and buildings and vehicles and landscapes that aren't asking to be seen, or studied, or appreciated. The things in his pictures just are. You can see scenes like this every day of your life and not have any particular feeling about them at all. But when you look at an Eggleston photograph, something else is definitely happening. I could go on talking about his work generally for a long time, but I need to focus on this one image.

The vantage-point of this image would be about 1 foot or so from the ground. The photographer was probably lying right on the ground, or maybe sideways. He liked the relationship that the trike created, framed against the neighborhood house in the background. The bike seems huge from this view, and that is precisely what we notice, perhaps subconsciously, right off the bat. We're returned to the perspective of our childhood, when we saw things from nearer ground-level. As a kid, I remember I used to like to turn my head upsidedown and see things from that perspective. The perspective in this photograph might be just a bit exaggerated, i.e., the lens might have been just a bit wider that "normal" focal length, making the background appear further away than it really is.

So there's this trike, and it's not being ridden. There are no people in this photograph. There's an implied narrative, unspecified, that could be deduced from the placement of things here. Has the trike been left out on the sidewalk? Is the distance between the trike and the house a kind of measure of the degree of freedom or attachment the rider senses? The trike is a metaphor for getting some place. As kids, we will grow up and leave home, and our bikes, then the cars, become the vehicles for that departure.

Of course, there are disturbing narratives too. The owner of this bike is gone, or he/she is missing. What might that mean? Has the kid been kidnapped?! We don't know. How much should be deduced from a situation like this? It's certainly possible to read too much into any situation. And yet this is something we do all the time. We make up stories.

Is childhood a time of certainty, or of doubt? Riding a trike is just a pleasant activity, feeling the sense of efficient movement, control, performing a simple task.

As our childhood inexorably recedes from us, the part we played in the time of our life becomes smaller and smaller, like a shrinking memory. In the picture, the tricycle occupies a foreground between the viewer, and the recession of time represented by the house in the distance. The house may stand for the world we were born into--its pleasures and terrors, its security and ephemeral stability. In the suburban paradigm, this home is not a farm, or a cave, or an apartment building, or a castle; it's the American mid-century world that Eggleston is documenting: The slightly over-rich Kodachrome color palette, the post-War preoccupation with building up pathetic little archives of personal, familial history, which seem so futile in retrospect . . . . It has a quality of sad absence, a wistful sense of passing that is not grandeur, or monumentality, or joy. The trike, though, is magnified in our vision of it. They say that as we get into old age, our mid-range memories recede, while our earlier, or earliest memories become more vivid. A favorite doll, an early playmate, a special toy, a certain place may expand in importance, in retrospect.

The photograph is like a diagram of the structure of mortality, how the material world, which surrounds us, and of which we are a part, is moving gradually towards an end which is our death. Reality can only have a meaning for us in the brackets of this segment of consciousness. The rusted tricycle exists only in a ghostly suspension, a context we outgrew. In the brief slice of time represented by the trike--the color slide of the shutter's click--a whole civilization comes and goes in the blink of an eyelid. But in our mind's eye, which is where memory lives, there is the fragile template of our own regard. We may long to return, or resist that disintegrating legacy, but it is beyond change. We escape the past, only to discover the inevitability of the present--a presence that is constantly dissolving into an irretrievable past.

Posted by Curtis Faville at 7:18 AM

The tricycle has completely vanquished the automobile, consigned to its garage, a discarded felic; and has even defeated its rider, left prone, clutching his camera. Look out, Curtis! The victorious, liberated tricycle will soon head for the urban center!

I do remember what fun riding a tricycle was.

Bikes were more difficult, and one had to "learn" how to ride them.

I must get out my old bike sometime. If I'm not too heavy!

Thank you so much for such an informative piece of information :)
If anyone interested similar one's have a look here
Mountainbikelabs